In teeing up Blue Bloods‘ new season (premiering this Friday at 10/9c), showrunner Kevin Wade has no whiz-bang stunts or edge-of-your-seat cliffhanger resolutions to tout. And that is by design.

“We have a prescribed thing that we do, for which I think the technical term is ‘a closed-end procedural,'” Wade tells TVLine. “So we don’t tell serialized stories, we don’t have cliffhangers, we don’t replace cast members…. Many of the tools that long-running shows have, very much to our credit or to whatever, we don’t have at our disposal, so we try to work with what we have.”

The cop drama’s aim is thus “to tell fresh stories — though not ‘ripped from the headlines,'” Wade makes clear, “and trying to find another layer to these long-running, existing characters, that the actor who plays it can sink his or her teeth into. That’s really what we’re doing for each of them.” 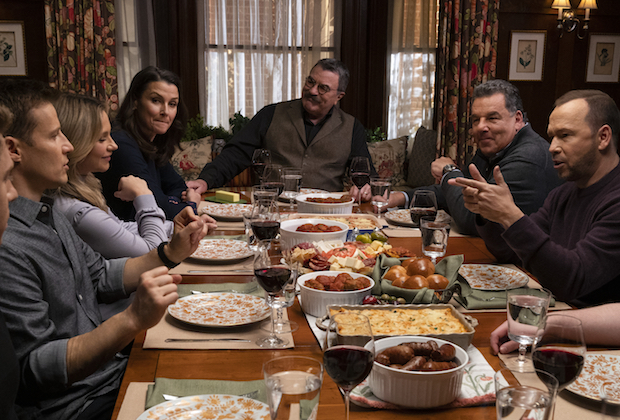 But speaking of ripping things from headlines….

The indisputable fact is that Blue Bloods in recent years has existed in a very different climate, one where “Defund the Police,” #BlackLivesMatter and related sentiments have taken a foothold — especially in the wake of the May 2020 murder of George Floyd by Minneapolis police officer Derek Chauvin.

And while Blue Bloods has at times broached such topics, it has a tougher row to hoe than any other current show, seeing as at its heart it is about a family of cops. So to suggest that some “bad apples” are out there among New York’s Finest runs the risk of clouding viewers’ opinion of protagonists Danny, Jamie et al.

Says Wade, “You only need to pick up a newspaper on Sunday for 20 minutes to realize that there is a deep and pervasive mistrust of institutions… of leaders, whether they are elected or appointed… of law enforcement in general, both on the judicial side and on the cops-on-the-ground side… because of all the things that have happened on the blue side and on the red side.

“It’s like, all bets are off,” the EP posits. “‘The FBI is crooked, we should ban them!’ ‘The justice department is in the pocket of whoever’s in the White House!’ ‘The New York City police commissioner is actually the mayor, and he spends all his time cultivating his night life.’ It’s a very upside-down world in which a bunch of conservative Catholics from Bay Ridge, Brooklyn” — aka Blue Bloods‘ Reagan clan — “try to carry out the thing that they know to do.”

Wade says that once he “embraced” this new challenge, he saw an opportunity, because the Reagans “are sort of the establishment and they’re sort of outliers, trying to do a last-century job in a new century where all the rules have been thrown out and nobody trusts anybody.” 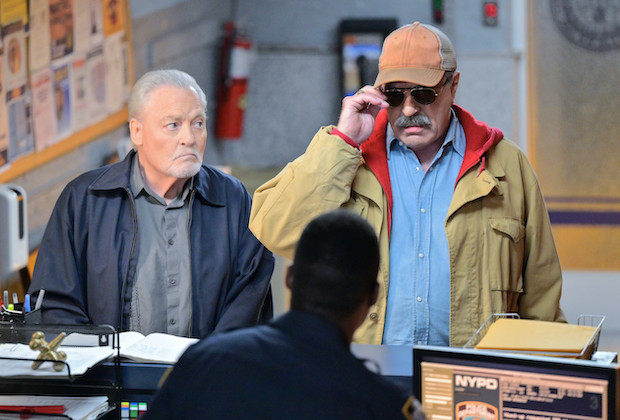 Wade says that this Friday’s season premiere, in fact, takes a look at that distrust when Stacy Keach’s Archbishop Kevin Kearns says to Frank, “You and I have lost our flocks. Nobody trusts any institutions anymore, so let’s go out in the city and find out what it is that people won’t say to our faces. Let’s see what’s out there.”

In true Blue Bloods fashion, you can expect a degree of insight into this “upside-down world” the Reagans now police, but offering up a POV from both sides and stopping  short of any preaching.

As Wade asserts, “Nobody is tuning in on Friday night at 10 o’clock to be taught a lesson or lectured on what the right point of view is. So when we try to address issues that have two very vocal sides to them, we try to build a soap box of equal dimensions for the, let’s call it, ‘antagonistic’ point of view.”

What else can Blue Bloods viewers expect in Season 13? Read on….