This week on FBI: International, the locking of horns between Special Agent Scott Forrester and muckety-muck Ken Dandridge hits a tipping point, as their approaches to cracking a case wildly differ. Could this be the clash that gets Forrester booted from the Fly Team for good?

In the episode “Someone She Knew” (airing Tuesday at 9/8c on CBS), the Fly Team races off to find a kidnapped American teen in Austria, all as the proverbial clock ticks on Forrester’s reassignment. As a result, Forrester finds himself having to weigh the value in following the lead of Dandridge (played by Michael Torpey), the ambitious Legal Attaché at the U.S. Embassy in Budapest, versus sticking with his own considerable instincts.

“Scott is faced with one of the biggest cases that he has dealt with in his career,” Luke Kleintank, who has played Scott since Season 1, tells TVLine. “On top of that, he is having to deal with the looming reassignment and Dandridge coming for his job.”

Speaking of Dandridge, “He is definitely a suit with an agenda,” Kleintank asserts. “Scott is the man doing his job, and Dandridge is definitely trying to get in the way to climb the ladder.” 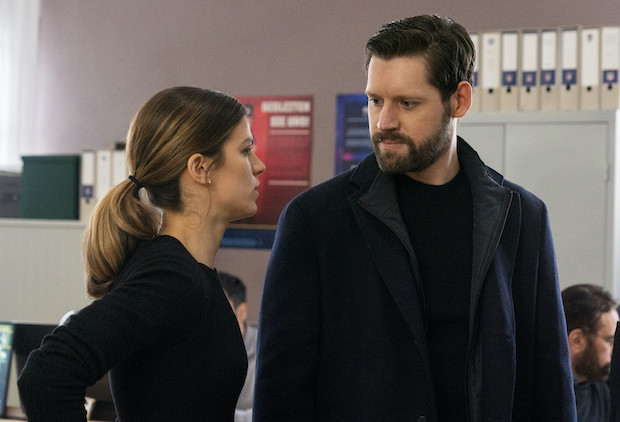 “McKenna is a big question mark” for the Fly Team

Not helping the Fly Team operate 100-percent freely, or without any trust issues, is the recent involvement of Special Agent Zoey McKenna (Kelley Missal). The fact that she was hand-picked by Dandridge himself is only further scrutinized when it appears that someone is snitching on Forrester’s every move.

“McKenna is a big question mark for Scott and the team,” says Kleintank. “Her storyline remains ambiguous at the moment — no one knows whether she’s good or bad just yet. But I think Scott is cautiously optimistic.”

Forrester is not one to bow to Dandridge’s demands, but as the hour unfolds, the Fly Team vet comes to realize he is not up against just one headstrong man. Far from it. “It doesn’t help that Dandridge has connections in Washington, particularly that of very powerful senators…,” Kleintank previews.

When a big clue suggests two disparate approaches and time is of the utmost importance, will Forrester go along with the option he doesn’t condone but by doing so allow Dandridge a win? Or will he not go down without one final fight? As TVLine’s Inside Line column recently reported, the end of this week’s episode will offer clarity about Forrester’s future with the team.

“I think Scott will go to any lengths to stay a part of the Fly Team,” says Kleintank. “But if that means his colleagues lose their jobs, he would walk away.”

Want scoop on any of the FBI shows? Email InsideLine@tvline.com and your question may be answered via Matt’s Inside Line.