We’ve got questions, and you’ve (maybe) got answers! With another week of TV gone by, we’re lobbing queries left and right about lotsa shows including Yellowstone, Kaleidoscope, Sistas and Ginny & Georgia!

1 | With all the hits HBO Max has taken over the past six months, is it really a good idea to keep subscribers guessing about the release time for the Lizzo concert special?

2 | Is it just us, or since the 2017 Mariah Carey fiasco has Dick Clark’s Rockin New Year’s Eve not attempted to book anything close to A-list talent? Or do you actually prefer “nostalgic” bookings like New Edition and Duran Duran?

3 | We know you don’t need alcohol to have a good time… but wasn’t CNN’s New Year’s Eve coverage a lot less fun with Andy Cohen and Anderson Cooper having to comply with the no-booze edict? 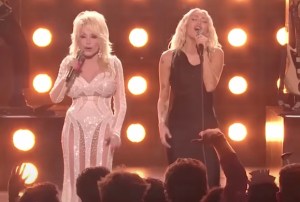 5 | What do we think, 1923 fans: Will the person who was hovering at death’s door at the end of this week’s hour have succumbed by the next episode? And regarding Elsa’s voiceover in the premiere episode, which told us that only one of James and Margaret’s children would “live to see their children grow” — isn’t that a bit a poetic stretch, given that Jack is no toddler? Also, are you surprised we learned so quickly in the season that Spencer is the only member of that subset of the family to survive?

6 | If Yellowstone‘s Jamie knew all along that Beth could never expose his murder of Garrett because doing so would also reveal the train station, why did he initially go along with being her whipping boy? Also, has she forgotten her promise to take away his son? And wouldn’t the midseason finale have been considered a snooze even for a regular episode, never mind a midseason finale? 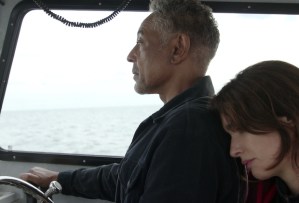 7 | In Kaleidoscope‘s “6 Months After” episode, why was that one accomplice of Bob’s doing a blatant Joe Pesci-in-Home Alone imitation? Also, are you among those who argue that watching “Red” and or “Pink” before the finale “ruined” the outcome of the heist? Or did those episodes only make you curious?

8 | In the wake of Damar Hamlin’s scary Monday Night Football collapse/hospitalization, how excellent were ESPN’s Scott Van Pelt and Ryan Clark in very frankly discussing the sports risks, and Lisa Salters reporting from the field?

9 | Who else wants a full album from Deborah Ann Woll after this week’s Quantum Leap?

10 | Are we to assume ABC released photos featuring The Conners‘ Roseanne returnee in advance of the winter premiere knowing there was no way fans weren’t going to be disappointed by who it is? (The EPs promised us an “oh s–t!” return!)

11 | On New Amsterdam, how did Helen know that Max was aware that she was in New York? (In her text messages, she never even mentioned it or explained her whereabouts.) 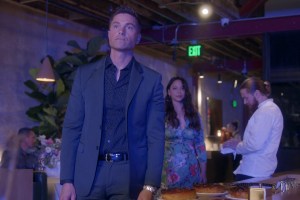 12 | If The Rookie‘s #Chenford were so worried about someone from work walking in on their first date, why eat at a restaurant located within their precinct? Also, did that really look like “the most romantic restaurant” in all of L.A.?

13 | Do you have to laugh each time FBI‘s Jubal bellows to the others in the room some version of, “OK, everyone! Let’s take the obvious actions in response to this obvious new clue”?

14 | During Chicago Fire, were you worried that Carver was starting to develop feelings for Stella?

15 | Was anyone briefly worried that Chicago P.D.‘s Ruzek wouldn’t immediately back Torres over that dirty cop?

16 | We know time operates differently on Tyler Perry shows, but can you believe it took a full calendar year for Sistas’ Karen to reveal the father of her baby, which she apparently “always knew”? And when do we think she’s finally going to give birth — 2025?

17 | Even for Big Sky, which has had its share of bizarre plot turns, wasn’t the literal life-or-death cornhole game in this week’s episode a very odd storytelling choice?

18 | During Thursday’s Young Sheldon, were you surprised there was never a point where George confronted Pastor Rob about his friendship with Mary? Or do you anticipate that will come later, as Rob continues to assist Medford High’s football team?

19 | Ghosts viewers, were you surprised that there was zero reference this week to what happened between Trevor and Hetty in the Christmas episode? Not even some subtle, residual awkwardness?

20 | Had Hell’s Kitchen customers Cheryl Hines and Rachael Harris come straight from the Fantasy Island set after filming the episode that aired on Fox earlier this week? And did you chuckle when they had to subtitle Danny Trejo speaking with a mouthful of taco? 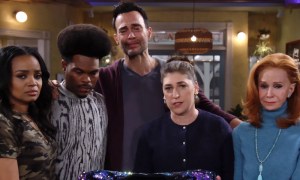 Has there ever been a more emotional fourth-wall breaking than during Thursday’s Call Me Kat, as the entire cast paid tribute to the late Leslie Jordan? (Show of hands: How many of you lost it as soon as Cheyenne Jackson did?) And were you pleased with the decision to have Phil live on, off screen?

22 | On SVU, were you at all distracted by how much Liv’s black eye looked like one of those rejuvenating under-eye patches? No? Just (petty) us?

23 | Ginny & Georgia fans, was Maxine this, um, grating last season? (She makes up for it in the back half of Season 2, thankfully.)

24 | For how much longer will we have to wait for SNL/Chloe Fineman‘s inevitable spoof of M3GAN???