It was very much “the more, the merrier” when the casts of NCIS, NCIS: Los Angeles and NCIS: Hawai’i came together for the CBS franchise’s first-ever 3-way crossover, airing Monday, Jan. 9, 2023.

“We were all truly there to mesh, to riff off of each other, and to have a good time,” Vanessa Lachey, who plays NCIS: Hawai’i‘s Special Agent in Charge Jane Tennant, tells TVLine in the Q&A below. “It was one of those moments where I’m like, ‘Gosh, I get to do this for a living?’ And it was also a learning opportunity.”

Setting the all-night crossover in motion is the NCIS episode “Too Many Cooks” (airing at 8/7c), in which agents from D.C., L.A. and Hawai’i find themselves jointly investigating a FLETC instructor’s suicide. NCIS: Los Angeles‘ Chris O’Donnell and LL Cool J guest-star in the opener, as do NCIS: Hawai’i‘s Lachey and Noah Mills.

TVLine spoke with Lachey about the mixing ‘n’ mingling of NCIS’ best ‘n’ brightest, how the intricate shoot overlapped with her Netflix duties, and more. 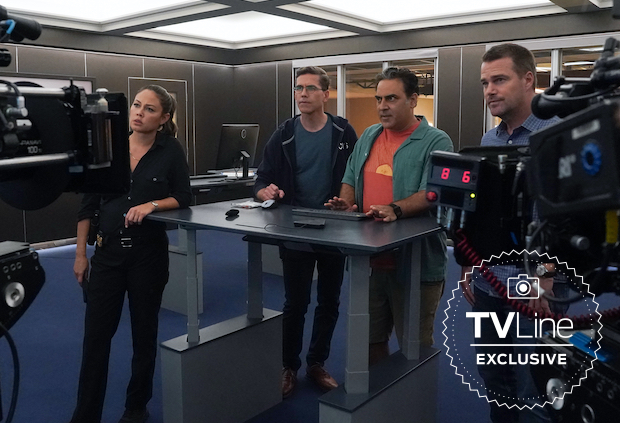 TVLINE | When did you first get word that y’all were going to pull the trigger and go for the big NCIS trifecta?
You know, it’s so funny, there was never like a “grand plan.” We had our [Season 1] finale for NCIS: Hawai’i where we did a crossover with NCIS, “the OG,” and it got so much amazing traction and support that we continued it with our premiere for Season 2, with another crossover. At that point, people were like, “You know, NCIS: LA needs to join the party” — and by people I mean the fans, to the point that it got the cast of all the different shows and the executives talking.

And then while I was actually shooting our [second NCIS] crossover, someone came in and said, “We’re doing it!” It was literally something that came about because of all the support of the fans, which kept propelling it into a forward direction.

Now, Wilmer [Valderrama] thinks it started when he and I presented at the Emmys, because it was our first season and they were like, “Wait a minute — NCIS, NCIS: Hawai’i….” He and I have known each other for two decades, so we have a natural chemistry, so they were like, “Let’s try this,” and it all ended up snowballing in a positive way. But me, I joke about Hawai’i wanting to be the one to lovingly take credit, saying, “Maybe we just needed some aloha to bring all three of the franchises together!” 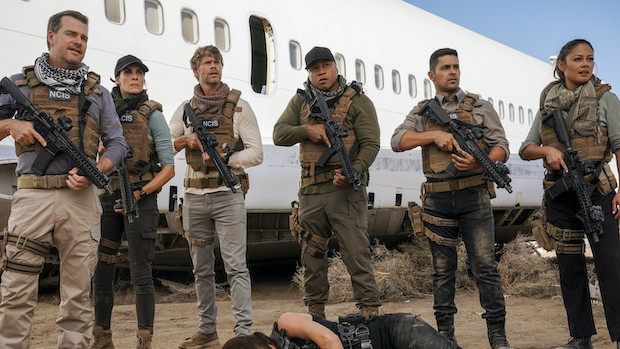 TVLINE | Going from two shows with just one or two characters crossing over, to three shows and pretty much everybody interacting, was it merely 50 percent more complicated or, like, 10 times harder?
It was seamless, actually. It was easier. Because when you do just the two, when they come to Hawai’i I feel responsible to be “the big boss” and to make sure everyone is taken care of, to make sure they have everything they need. But when there’s three shows with all of the cast, it’s evenly split and spread out. We were all truly there to mesh, to riff off each other, and to have a good time and to make really great television. So, it was a hundred times easier than [crossing over] just the two. The plot was distributed more evenly and we each had our own little separate things going on, so when we came together it was just fun. It was one of those moments where I’m like, “Gosh, I get to do this for a living?” And for me it was also a learning opportunity to watch these seasoned actors in their element and just take it all in.

TVLINE | I ask because over the years I covered the Arrowverse crossovers with three, four, even five shows, and logistics-wise, the actors would always tell me that it gets to a point where they are just led around by PAs. “You need to get in this golf cart and go over to this set, now.”
Oh, don’t get me wrong, it was harder logistically, but nobody will feel sorry for me saying that — “I’m so sorry you had to fly from Hawai’i to L.A. to hang out with Chris O’Donnell and LL Cool J and Wilmer Valderrama and Gary Cole!” Logistically, 1,000 percent it was a nightmare. There were days that I would come onto a set and I would look at the director and say, “Hey, which one is this one?” They’re like, “This is L.A,” and I’m like, “And where are we at in the plot…?” I had everything organized but to add to this, simultaneously I was wrapping up [Netflix’s] The Ultimatum from start to finish, and we did the finale for [Netflix’s] Love Is Blind. All of this happened in the same month! I was waking up in cities wondering what show I was doing and where I was. I would lean over and touch the bed and if [husband] Nick [Lachey] was there, I was like, “OK, you’re here. What are we shooting?” And he’s like, “Today is Love Is Blind.” I’m like, “Got it, got it, got it.”

TVLINE | Well, that’s just your fault for being popular.
[Laughs] See, that’s what I get. So, I would never complain about that, but it was logistically harder, while the actual job was so much more fun and easier. 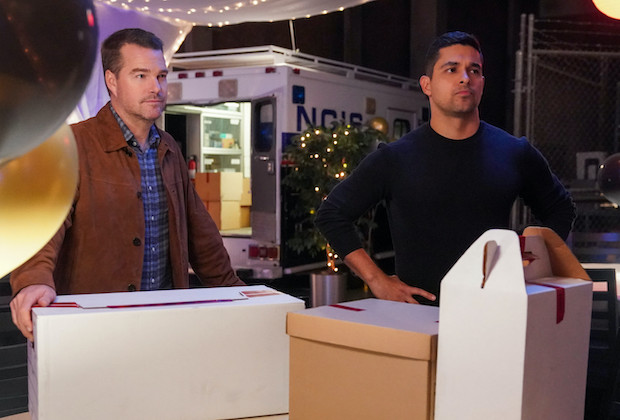 The ‘NCIS’ episode “Too Many Cooks”

TVLINE | What sort of fun dynamics between agents should we watch for? Who did you enjoy seeing interact with each other?
I just love watching Gary [Cole] integrate into all of the different scenarios. And Chris [O’Donnell] and Todd (LL Cool J) are Chris and Todd, so the same with them. I’ve interacted with my cast and with Wilmer and Katrina [Law] so much, it’s always a guaranteed good time. But as far as on-camera what the fans will see, I think Gary coming into all of the universes was really entertaining. And watching Todd and Chris navigate the different worlds was fun.

TVLINE | Yeah, there are some fun exchanges between Tennant and Parker. They have not so much a turf war but, “Wait, is that my coffee mug?”
And I love him so much. He’s the best. I’m like, “Just walk all over me if you have to. I’ll take it.”

TVLINE | Because of the demands of this, might you have a lighter presence in the next regular NCIS: Hawai’i episode?
I guess maybe that would be textbook for other crossovers, but for us, we’re still a “rookie,” in Season 2. I don’t know if you can tell right now, but I’ve actually, like, lost my voice — last night I couldn’t even talk, and today’s my first day off in, I don’t know, God knows when. We’re still trying to get our show off the ground and show everybody what we can do, so we hit the ground running. November was extremely taxing and we’re ending the year on top. Larry Teng — who was a huge part of not only me getting this job, but of our Season 1 — is directing [Episodes] 213 and 215, which are massive action episodes, and in the middle of that we had a great guest star in Jake Weber (Medium).

TVLINE | So, Jane is not going to be off running errands in the next episode, to give you a breather.
Oh, no. No, no, no. The hits keep on coming, literally and figuratively. 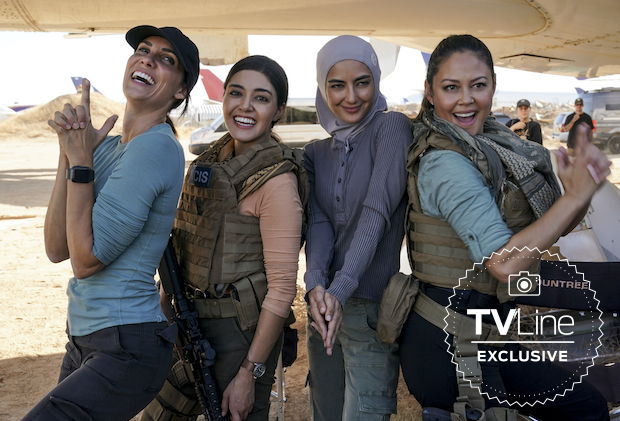 TVLINE | Speaking of time off, “Agent Afloat” Lucy Tara appears in the Los Angeles episode of the crossover. Will Yasmine Al-Bustami  be back for good in the Jan. 16 Hawai’i episode, or will she again be “at sea”?
Well, she’s still part of our team. [Yasmine] has been back and forth, and it’s been really great that our writers have been able to write around the commitments she has going on in the mainland. She still here and she’s still around, but we try to honor what she has back on the mainland and maximize the time when she is here. She’s here right now, and we just wrapped two massive water days where all of us were getting soaking wet.

TVLINE | Do you have any fun, behind-the-scenes anecdotes from the crossover shoots?
We all came together for The Talk on CBS (airing Jan. 9) and we went off, realizing how amazing the chemistry is because we all have this common umbrella of the NCIS franchise. We all do our own shows, but we all are under one family that it is really great to be a part of. So whether it was, you know, Todd walking around with his speaker blasting his music, or Chris with the quick jokes, or Gary eating all of the treats…. I mean, if there was a pie or a cookie to be had on-set, Gary is like, “Ooh, can I get one?” 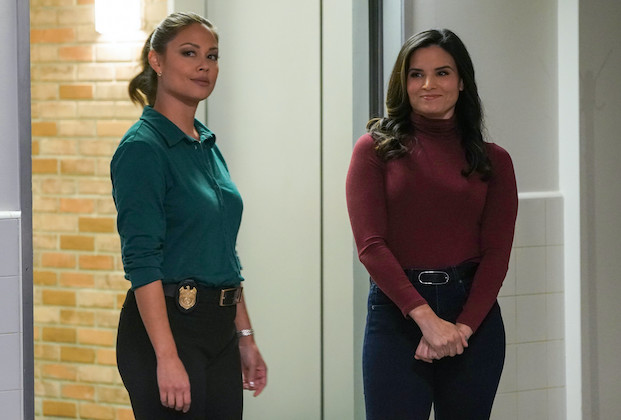 Lachey and Law in “Too Many Cooks”

TVLINE | Oh, he’s that guy.
Yeah. And you have Sean [Murray] talking about his family, and Wilmer is always working, having eight different things happening at the same time. While Katrina and I are just laughing about anything silly.

TVLINE | She’s the best.
For me, this is the first time I’ve gotten to meet a lot of them and work with them. I had never met Chris or worked with him. I’ve met Todd, but I’ve never worked with him. So to be able to see, “Oh, they’re just like us,” that they are just good people…. I give a lot of credit to CBS for finding these [actors], and this is why, in my opinion, NCIS is so successful as a franchise. Because we all work well individually and together, and it was just fun to hang out and kick it with them.

Want scoop on any of the above NCIS shows? Email InsideLine@tvline.com and your question may be answered via Matt’s Inside Line.