The Game Season 2 promises to “double the laughs and heighten the drama as the beloved characters and their relationships fight to survive the storms of change,” per the official synopsis.

Thursday’s season premiere on Paramount+ took us back in time to Draft Day 2017, when Jamison was still a rising star with a promising future, Malik was desperate to get out of San Diego, and Tasha Mack was on the cusp of expanding her sports agency empire.

In the flashback episode — which featured returning favorites Tee Tee (played by guest star Barry Floyd) and Jason Pitts (Coby Bell) — we saw exactly how Jamison’s life fell apart after his girlfriend’s father found out they were sleeping together. On the day he was supposed to be drafted to the NFL, he was arrested for rape. Garret, meanwhile, got drafted to the Las Vegas Fightin’ Fury and subsequently dropped Tasha as his agent. 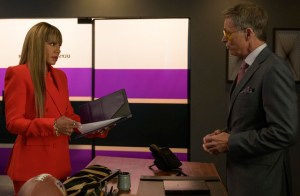 Tasha negotiated Malik’s trade, securing him a new contract which guaranteed him $100 million over four years. Oh, and Tasha closed a deal with Rick Fox to acquire his sports agency after he decided to leave the business and settle down in his hometown.

Jumping back to present day… the players went on strike, which spelled trouble for Tasha. Remember when Colonel threatened to move up the deadline to pay back the massive loan she took out for the sports academy, if she didn’t convince Malik to avoid a strike? Well, she didn’t deliver on the deal and now it was time to pay up.

In Episode 2 (which is also streaming on Paramount+), Tasha searched for a way out of her legal and financial nightmare. Colonel offered to keep the name of her agency the same, as well as a job with a “very nice salary,” in exchange for her cooperating with him taking full ownership of the company she built from the ground up.

Elsewhere, Jamison’s ex-girlfriend Allison paid a visit with the intention of rekindling things. But Jamison was ready to close that chapter of his life, especially now that his heart belongs to Brittany.

In a Hail Mary move, Britt called in Rick Fox to help Tasha via a legal loophole that ensured that she would remain in control of the agency and have extra time to pay off the loan in full. Colonel later offered Rick part ownership of the football team, and he backed out of their previous deal.

But with the league now officially on strike, Tasha had lost her agency.

What did you think of The Game’s double-episode Season 2 premiere? Grade both installments below, and then sound off in the comments.