Warning: The following contains spoilers for Sunday’s Yellowstone. If you’ve yet to watch, you may want to put off reading this interview until you have.

It hardly came as a surprise to Yellowstone fans that mantrap Sarah Atwood was able to so quickly entangle Jamie in her web; she was offering not only hot sex but the governorship to boot! But what did come as a shock in Sunday’s episode (recapped in full here) was the threat that was implied when her lover pointed out that dad John would be hard to beat in a fair fight. “I don’t think we can let him show up to the fight,” Sarah replied. Gulp! Is her plan to have Jamie kill yet another of his fathers? To find out, TVLine Zoomed with Dawn Olivieri, who brings the conniver to deliciously wicked life.

TVLINE | What’s your take on Sarah’s “I don’t think we can let him show up to the fight” line? Does that mean… murdering John?
[Laughs] I think it’s meant to mean a few things. [Co-creator] Taylor [Sheridan] loves writing these moments that could branch out into anything. It gets viewers engaged with cliffhangers just like the one you’re talking about. Did you think the line sounded murderous?

TVLINE | Yeah. It sounded to me like Sarah wanted Jamie to kill John.
[Laughs] It’s hard to pin down. Taylor doesn’t like to duplicate anything. Except for his actors, I guess! (Ed. note: Olivieri is a veteran of Yellowstone prequel 1883.) 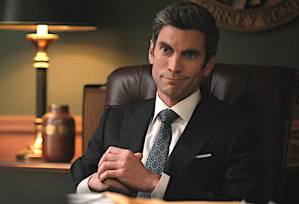 TVLINE | Does Sarah have any feelings whatsoever for Jamie other than “He’s useful”?
It wouldn’t be interesting if she didn’t. One of the main things I thought about in building the character was that I wanted her to be a real woman, not this cookie-cutter villain. I wanted her to be a 40-year-old executive powerhouse that comes with her own deep bank of struggles. Any woman who’s traded a family and that sense of security for career domination [is going to have] some hang-ups. This episode was a great opportunity for me to weave in a little of that, because I don’t care how diabolical you are, as a female, chemically, you can’t help but bond with someone when you have sex with them. If you’re a psychopath, cool, but I don’t see Sarah that way. The complexity is what’s interesting to me. I want the viewer, and also maybe a Sarah a little bit, to be confused as to whether she’s into this guy or not and how far she’s willing to take it to get what she wants.

TVLINE | And both of those things can change over time, especially given how “close” Sarah and Jamie are becoming.
You have to be vulnerable if you want someone to fall in love with you. On some level, you have to appear that you are doing it for real. So is it a construct, or is she [falling for Jamie]? I don’t know. My instinct tells me it’s pretty early in the game to be feeling that way in a real way, but even if you put someone on in that manner, be careful playing with fire. Because if you pretend to like someone long enough, it could actually become real. 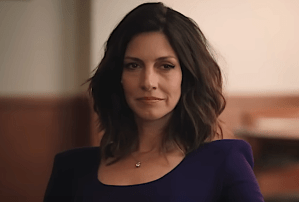 TVLINE | Let’s say Sarah is successful at replacing John with Jamie as governor. Would she be willing to become First Lady of Montana to keep pulling his strings?
If what she wants is wrapped up in that win. It just depends on what Sarah is doing it for. I think it’s partly the money, but someone who is that calculating? There’s a thrill of winning in there that’s worth more than any amount of money. So I think it’s more like, “How can we play this game? Can I best the strongest player on this board?”