At long last, Law & Order: SVU‘s Dominic “Sonny” Carisi and Amanda Rollins are husband and wife. Celebratory zeppole all around!

Unfortunately, the blessed union of ‘Rollisi’ also marks Kelli Giddish‘s last SVU episode. So it’s a bittersweet affair for the couple’s fans — as well as for Capt. Benson, who spends part of the episode in or near tears and the other part going deep on her feelings for Stabler.

Read on for the highlights of “And a Trauma in a Pear Tree.”

We open on Rollins and Carisi in bed, their alarm going off. They cuddle and talk about the case of the week — Elias Olsen, that guy from earlier in the season who had the girls in his basement, is going to trial — but I’m distracted by Carisi’s amazing bedhed. Then the girls bounce in, all excited about Christmas, and I nearly expire from the domestic bliss. 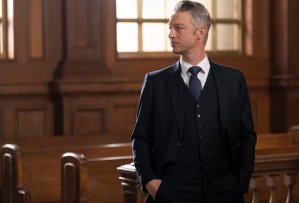 Before you know it, Carisi is bailing on prepping Muncy for cross examination because he’s rushing to court. Benson, Fin and Velasco meet him there, wondering what’s the emergency. And that’s when Rollins walks in in a white dress with puff sleeves (#AnneOfGreenGablesRepresent!), holding a simple bouquet.

The 52 Most Shocking Cast Exits Announced in 2022

There’s some very clunky dialogue about how marriage is like crime (honestly, WHAT?), but Amanda and Sonny are beaming, and that makes up for a lot. “We didn’t want to do this without any of you here,” the bride says as Liv hugs her and Fin teases their boss about getting verklempt. “Counselor, you ready to begin the longest arraignment of your life?” the judge asks Carisi, (see what I mean?!), and the ceremony gets underway.

Afterward, everyone goes to a restaurant to celebrate. When Liv wonders where Mama Carisi is, he tells her his mom is planning a big bash of her own. Yay, right? Except later, we learn that Rollins still hasn’t told Benson about her plans to leave the squad. Eventually, she calls the captain to let her know… but gets off track because Liv is staying at a motel where someone is apparently recording guests in their rooms without their knowledge?! Rollins says Carisi is busy with the trial prep and the girls are at her mom’s, so she’ll drive up the next morning. 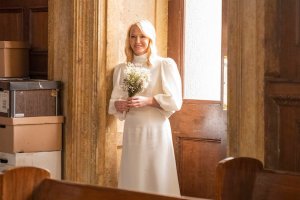 Why is Liv at a grungy motel, you ask? Because, via a genealogy registry, Noah found out that he has a half-brother named Connor who lives outside the city, and they’ve driven up there to meet him and his family. Connor’s adoptive parents seem great — and because years of watching this show have warped me into a Suspicious Sally, I immediately assume they’re running a sex slave ring outta their basement. Which is why I’m shocked when Liv reluctantly agrees to let Noah have a sleepover with his newfound sibling while she spends the night at the lodging she’d booked for them.

Rollins arrives the next morning, and her and Liv’s investigation takes them to a bar to drink beers and flirt with the guy they think put the cameras up in the motel. (Doesn’t make sense? Yeah, I’m right there with you. Seems… egregious at best?) They get him drunk and bring him back to Liv’s room, where he thinks there’s going to be some three-way sexytimes. But he balks when Liv starts to take off his belt, which is their clue that he knows what’s going on. And just like that, the local police have him in cuffs in the back of a car and that’s that! Time for boxed wine girls’ party! 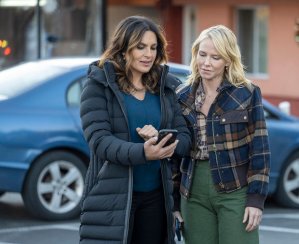 As Rollins and Benson drink and hang out on the bed, they discuss Rollins’ happiness as the newly minted Mrs. Carisi, which prompts Amanda to ask about Olivia’s feelings about her former partner. “I did feel like Stabler was my home. But he left me, Amanda, and I’m not over it,” she says. She adds that things were almost easier when Kathy was alive. “With her gone, it’s like there’s nothing but possibility. It’s paralyzing.”

Eventually, Rollins gets to the entire reason she drove out to talk with her boss in person: She’s likely going to leave the squad and take a new job. “I made this choice, and I need you to be OK with it,” she says, but Liv is NOT. The next morning, Rollins checks out without telling Benson.

When Liv goes to pick up Noah, Connor’s family has gifted him with a PlayStation 5 and a present for her, as well. And back in Manhattan, Carisi laments that Liv wasn’t psyched for Amanda, but he confirms with her that she’s taking the Fordham job: “My wife, the professor. It’s got a nice ring to it.”

In the end, Rollins shows up at Benson’s office and they make up. “I’m really sorry I reacted like that. You were being open with me, and I shut down,” Liv says. “You’re not losing me,” Rollins reassures her. “We’re friends. That’s not going to change. I’m not going to disappear.” (That’s way harsh, episode writers.) They tearily hug, which turns into sobs. “Don’t postpone joy,” Liv says. Then she tells Rollins she loves her, and Amanda steps out into the squad room to applause and good-bye embraces from her co-workers.