The following contains spoilers from the Dec. 7 episode of Leverage: Redemption (now streaming on Amazon Freevee).

Surprise! Keith David this week popped up on Leverage: Redemption, which has been one of the veteran actor’s favorite shows since Leverage first debuted on TNT. What’s more, David got to play Dad to a main characters: Eliot!

Yep, viewers and characters learned from “The Fractured Job” that Eliot (played by Christian Kane) is adopted, and in this week’s episode, he tried to sneak off to talk to his father for the first time since he joined the Army. (Canon tells us that father and son had a huge fight the night before Eliot left.)

Parker and Brianna joined along for “emotional support,” and as soon as the trio arrived in Carson, Okla., “The Hitter” pulled over to bust up a street fight between some muscle for a local fracking rig, and… his father! In proceeding to target and take down an AG (played by Doug Savant) who was in the frackers’ back pocket (and by teaming up for a group fight), Eliot and his dad made tearful amends.

TVLine spoke with Keith David about his Leverage guest spot, that Greenleaf spinoff talk, and more.

TVLINE | What brought you and Leverage: Redemption together? Had you and producer Dean Devlin ever worked together in the past?
No. Certainly, we were on each other’s radar. He was certainly on mine, and it’s one of my favorite shows. I’ve watched all five seasons [on TNT], so when I got the opportunity to actually work on it, hey, man, I was thrilled. Absolutely thrilled.

TVLINE | Yeah, I’ve watched it since Day 1, too. It’s just so damn clever.
That’s what I mean. That’s why I wanted to do it, because I love shows that are not just good and shining but smart. I mean, look at Hardison (played by Aldis Hodge) and what he does…. All of them. Everybody contributes something that makes you go, “Oh s–t, wow,” and you wish you were that guy. I’m not going to out there and commit the crimes, but…

TVLINE | I like to think that we all pick up a thing or two watching Leverage –just so that if that day comes, we’ll be able to get by.
Absolutely.

TVLINE | What about this particular character interested you most? Was it the fractured father/son relationship, or also getting to do some commentary on fracking?
Both. I mean, I love all these people, but I especially have always had a great affinity for Eliot. When I got a chance to play his dad, it was a gift. There are many reasons why I thank my lucky stars for continuing to be able to be in this business and to have a life in this business, but every once in a while you get a gift like this.

TVLINE | Did Christian give you any tips for the fight scenes? Or does Keith David not need tips for fight scenes?
He did a lot of the choreography, with the help of a wonderful fight choreographer. I’m not unused to fighting on screen, so I had a great time.

TVLINE | You of course do a lot of voice work in your career. What do you look for in a voice role? Because obviously you can’t say yes to everything.
It’s always the story that interests me. One of the reasons I like doing Rick and Morty is because it’s funny and smart and sometimes clever, but sometimes it’s even smarter than just clever. It’s like, “Oh s–t, this is smart.” 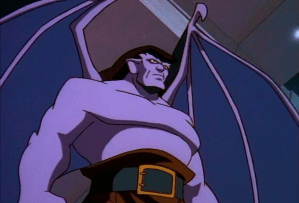 TVLINE | Among your many voice roles, do you have a favorite person, thing, critter or being that you’ve seen your voice come out of?
Oh, God. Goliath [from Gargoyles]. Goliath is still my favorite character 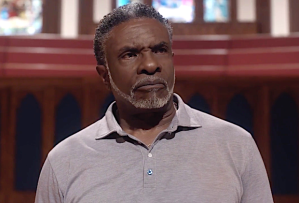 TVLINE | The original was such a good show, and I feel like there are more stories to tell.
Again, that was another gift. The wonderful thing about being an actor is that every once in a while, sometimes more than once, you get a real gift of a character that resonates with your life and resonates in the lives with the people who watch.

TVLINE | Before you called, some coworkers and I were looking at your IMDb page, like, “He’s been in everything.” And I joked, “But he hasn’t been in An Officer and a Gentleman!” So, I have to wonder: Have you ever met David Keith?
Many times.

TVLINE | Really?
Yes. In fact, I’m not going to tell you what it is yet, but we might even be appearing in the same show down the road….

Want scoop on Leverage? Redemption, or for any other show? Email InsideLine@tvline.com and your question may be answered via Matt’s Inside Line.