The following contains spoilers of a sort from The Guardians of the Galaxy Holiday Special, now streaming on Disney+.

The Guardians of the Galaxy Holiday Special sent Mantis and Drax (played by MCU vets Pom Klementieff and Dave Bautista) on a Yuletide mission to Earth, where no sooner had they set foot on Hollywood Blvd. than the latter nearly got into fisticuffs with a costumed character dressed as the GoBot named Cykill.

Mantis quickly broke things up and pulled her friend off the stranger, explaining to onlookers that “GoBots killed his cousin!”

Meaning, that GoBots are real beings in the Marvel Cinematic Universe. And not just toys/cartoon fodder.

Gunn also explained to fans of the holiday special that when it came to choosing which costumed figures would populate his take on Hollywood Blvd.’s tourist photo op scene, “I chose from the ones available to us, either public domain or Disney, or in the case of GoBots, Hasbro being very nice to let us use CyKill.” 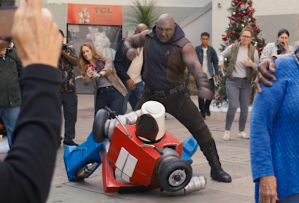 When one follower asked if Gunn had considered using Marvel’s own Rom, a space knight that was first a toy before landing on the comic book pages, the filmmaker said, “No. GoBots was used because I thought it was funnier!”

Cykill may beg to disagree, however, seeing as how when the Hollywood Blvd. sequence came to a close, Drax was in the background absolutely pummeling the poser.

The other hot topic coming out of the Guardians holiday special was the latest appearance of Groot, who is no longer in an adolescent phase (as last seen on the big screen) but is now “YA Groot” — or, more descriptively/jarringly, “Swole Groot.”

Gunn explained on Twitter that Swole Groot, being a progeny and not a clone of his sire who starred in Guardians of the Galaxy Vol. 1, is simply “getting bigger, outward as well as upward. As you can see by now, he has a different, stockier physiology (and a more outgoing personality) than his father did.” 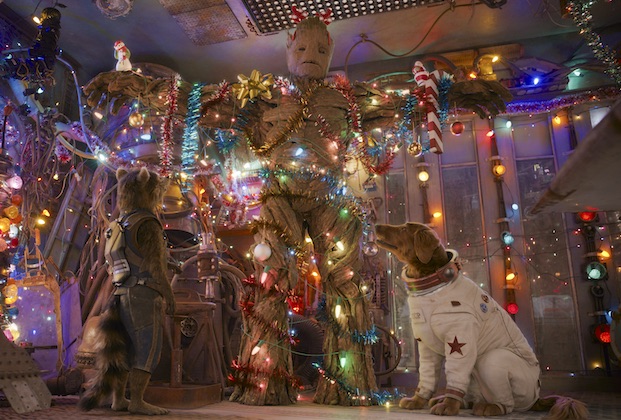 “He’s much broader than OG Groot ever was,” Gunn reiterated. “He’s a totally different Groot.”

Gunn also pointed out to many who inquired that Swole Groot, again voiced by Vin Diesel, was in fact not a person wearing a practical costume but “100% computer generated thanks to the fine folks at @Framestore and @weta_digital.”

Gunn — who for the next few months is working for both Marvel (as a filmmaker) and DC (as the co-boss of DC Studios fka DC Films) — also fielded some (overly concerned, sometimes-rude) inquiries about how Nebula, a cyborg with advanced alien technology, came to be in possession of Bucky Barnes/The Winter Soldier’s vibranium arm, in order to gift it to Rocket on Christmas.

“She tore it off his body,” Gunn maintained, “because she was overwhelmed with Christmas Spirit.”