There will be decidedly greater connection/continuity between DC TV and film projects once the new DCU starts taking shape, says James Gunn.On Nov. 1, filmmaker Gunn and longtime producing partner Safran officially stepped into their roles as co-chairmen and CEOs of DC Studios (fka DC Films), where they oversee “the overall creative direction of the storied superhero franchise across film, TV, and animation under a new, unified banner.”

Said “unified banner” will result in a more consistent connection between projects for the small and big screens, whereas, for example, TV’s Barry Allen/The Flash has been played by Grant Gustin, while Ezra Miller has been playing the same speedster in recent/upcoming films. Similarly, for a hot minute there were nearly four different Bruce Waynes/Batmans floating around (played on TV by Titans‘ Iain Glen and Batwoman‘s Warren Christie as a lookalike, and by Ben Affleck and Robert Pattinson in movies), while Clark Kent/Superman in recent years has simultaneously taken the form of Tyler Hoechlin (on Supergirl and in Superman & Lois) and Henry Cavill (in films). 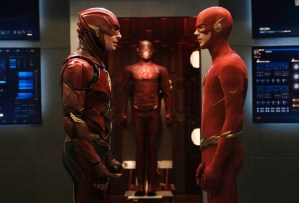 But as Gunn and Safran’s plans slowly but surely come to fruition, such disconnects are poised to change significantly.

“Are you and [Safran] planning to give more DC character tv shows that’ll add to the story for the DCEU?,” a fan tweeted Gunn on Sunday. “Yes, most definitely,” Gunn replied, “the DCU will be connected across film and TV (and animation).”

Gunn himself has already enjoyed playing in both sandboxes. The John Cena-led Peacemaker series — an offshoot of his The Suicide Squad team-up movie, and for which Gunn wrote all eight Season 1 episodes and directed five — was renewed by HBO Max for a second season back in February.

Similarly, HBO Max is in development on a series focused on Colin Farrell’s Penguin character from Matt Reeves’ The Batman movie.

In fielding tweeted follow-up Qs, Gunn said that “some” future animated fare will continue to be standalone in nature… yes, video games, will also share a better connection to a greater DCU… and yes, he will “continue writing & directing select DC projects” while fulfilling the duties of his lofty new title.

As for what DC characters might finally get a proper showcase under his and Safran’s vision, Gunn made no promises, but he did note, “Interestingly, Booster [Gold] was the MOST requested character when I asked people on Mastodon what character they’d most like to see on screen.

“I’m not creating stories by public vote,” he made clear, “but I found it fascinating nevertheless.”