After narrowly avoiding death twice and being mysteriously saved by a homicidal monster, Wednesday’s titular character may have finally found a place she loves.

In the series premiere, Wednesday (played by Jenna Ortega) rushed into the woods to save her classmate Rowan, only to find out he had been trying to kill her. He believed her to be the one who would destroy Nevermore Academy and that it was his destiny to stop her. But before he could complete his mission, a giant beast intervened and saved her life.

While the creature’s motives remain unclear at this point in the story, there’s no denying that he is a Tim Burton creation. Just look at the eyes. 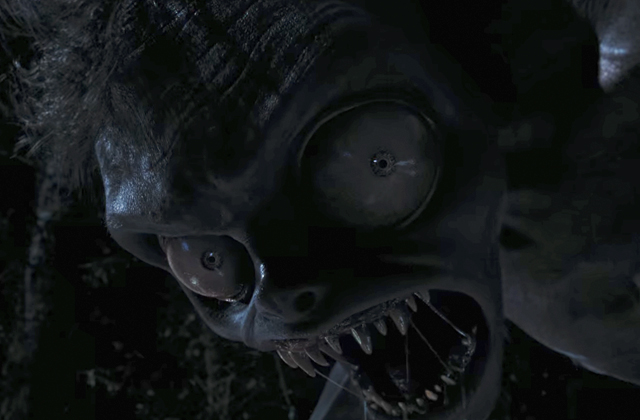 “That literally is Tim’s design,” co-showrunner Al Gough tells TVLine. Burton, who directed the episode, grew frustrated when the team couldn’t settle on a final look after the 50 or 60 different versions that were sketched. He then drew a watercolor image of the monster, and that became what you see on screen.

“I think it’s so original, unique and creepy. That is exactly what we wanted,” Gough explains. “There’s this one creature designer in Hollywood that everyone turns to, like the Stranger Things people, and it has a similarity or familiarity. But this one is very unique. We were so excited to have something that’s specific to the show, and to Tim.”

How are you feeling about Wednesday so far? Grade the premiere below, and then sound off in the comments.