The carousel of sexual adventure is officially spinning out of control on The White Lotus, and at this rate, somebody’s going to get hurt.

As Sunday’s episode opens, Cameron rushes Lucia and Mia out of his room after their wild night, and he doesn’t even have enough cash to pay them; he promises to leave the rest for them later at the front desk. Harper calls Ethan and can tell something is off: “You sound weird.” While Dom goes off to buy a nice gift for his estranged wife, Portia apologizes to Albie for ditching him the night before. She just needs to get rid of Tanya (“It’s been a lot”), and then she can hang out today, she says. Tanya, meanwhile, befriends a gay Englishman named Quentin (Tom Hollander), who declares her fashion sense “so chic” and invites her to join him and his friends for a cocktail at the beach club. And since Greg is gone, why not? 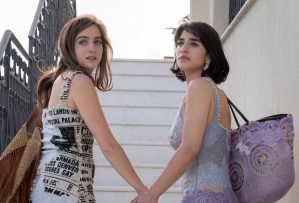 Lucia is exhausted and starting to feel guilty about her line of work (“All whores are punished in the end,” she says), but Mia kind of liked it. When they spot Albie and Bert at the pool, they sneak up to Bert’s room to take a quick shower. Cameron swears Ethan to secrecy about last night (“Bro code”), and Daphne does the same to Harper about her blabbing about Cameron’s cheating ways. She thinks she can trust Harper, though: “Plus, you don’t know anybody.” Bert goes back to his room and walks in on Lucia and Mia, catching Mia topless before they run out apologizing. Tanya drags Portia along to meet Quentin at the beach club, where he’s joined by several flamboyant friends — and also his “naughty nephew” Jack, aka the hot guy Portia was eye-flirting with at the pool. Interesting!

Jack is a charmer, and he’s also just happy to meet a girl, since he’s a straight guy surrounded by gay guys all day. While he’s offering to show Portia a good time, though, Albie is saving her a seat by the water… and looks up to see her flirting with Jack. Lucia and Mia try to sit next to Albie, but he tells them he’s saving that seat. Quentin gives Tanya a shoulder to cry on about Greg, inviting her to tell him the whole story from the beginning. (Her response? “Well, I was born in San Francisco.”) Harper gets back to the hotel room and tells Ethan all about how Daphne and Cameron’s marriage is fake and he cheats on her all the time: “Compared to them, we are fine.” Ethan is still throwing up from last night, though, and when Harper sits on the couch, she finds a condom wrapper in the cushions. Uh-oh. 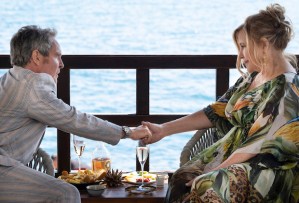 Quentin assures Tanya, “You’re too fabulous to be this sad,” while Albie marches right up and interrupts Portia’s chat with Jack. Portia claims she’s stuck taking care of Tanya but tells Albie she’ll catch up with him later — yeah, right — so Albie has to have lunch with Dom and Bert, scoffing when Dom shows him the jewelry he bought his wife: “You can’t just buy people off, Dad.” Harper sits silently fuming at lunch with Ethan, Cameron and Daphne, still thinking about that condom wrapper, while Mia decides she “should just f–k the piano player” to help her career. Lucia tries to stop her, but she’s inspired… and Lucia goes back to Albie’s beach chair and strikes up a conversation with the lonely lad.

The piano player Giuseppe happily takes Mia up on her offer, and they run off to an abandoned church on the property to do the deed, but he can’t perform. So Mia runs off to fetch Lucia’s Viagra, except she doesn’t know which pill is which. (She tries to ask Lucia, but she’s busy swimming with Albie.) So Mia just grabs some random pills and gives Giuseppe two of them to take. We said “uh-oh” already, didn’t we? Harper presses Ethan about what really happened last night, but he says they just got really drunk and talked to random people at the bar. Tanya and Portia join Quentin and his friends for dinner, and Jack offers to model his new underwear for Portia later. Meanwhile, Giuseppe is struggling as the pills kick in… and he collapses to the floor. Yeah, that probably wasn’t Viagra.

An ambulance screeches up to carry away Giuseppe, and Mia offers to sing in his place, but Valentina tells her to get lost. (She also gives female staffer Isabella a starfish pin as a gift, suggestively pinning it to her jacket. Hmmm.) Albie buys Lucia and Mia drinks at the bar, while Portia and Jack drink at the other end of the bar, which is a bit awkward. It gets even more so when Jack and Portia start kissing, so Lucia says, “Don’t let her win” and kisses Albie. Dom retires to his room early to watch porn on his laptop, and Harper grills Ethan one more time before pointedly leaving the condom wrapper out on the bathroom counter, while Jack models his underwear for Portia before climbing into bed with her. Oh, and Lucia goes back to Albie’s room and, um, thanks him for spending the day with her.