Relationships are getting shuffled left and right on The White Lotus, and that could spell doom for one key couple. 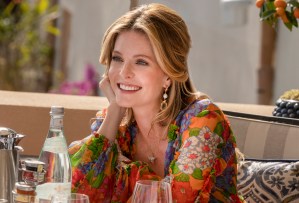 As Sunday’s episode opens, Valentina picks up her morning coffee — and snaps at a random guy who tries to hit on her. Dom wakes up with Lucia half-naked in his bed and Mia sleeping on the couch, shooing them out the door with a wad of cash. While Ethan is out for his morning run, Harper gets dolled up and is there ready for morning sex when he returns… but he walks right past her. Still, she promises to be nicer to Cameron and Daphne: “I’m gonna be so fun… Just watch.” At breakfast, she plasters on a smile and exchanges chipper compliments with Daphne, but her sunny approach backfires when she gets roped into driving out to an old Italian town nearby with Daphne while Cameron and Ethan stay back at the hotel and ride jet-skis. Oops!

Albie tracks down Portia and apologizes for ending their night early, saying he wanted to come in. “Then you should’ve come in,” she replies. He frets that he should’ve been more aggressive, so when Bert invites her along on a tour of Godfather filming locations, Albie tells her to come along: “I’m being more aggressive.” Meanwhile, Tanya is a mess as Greg prepares to fly back home, sobbing and offering to drop their prenup if he’ll stay. He thanks her for finding the doctors so he’ll now live a lot longer — yeah, we were wondering about that — and sets her off again when he mentions being married four times. (“I thought it was only three,” she sobs.) Plus, Lucia and Mia take their cash and splurge at a fancy boutique, bossing the saleswoman around. 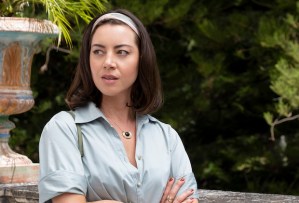 Harper and Daphne head out on their day trip… and Cameron catches Lucia’s eye back at the hotel. On the Godfather tour, Albie dismisses the movie as an outdated patriarchal fantasy drenched in sex and violence. Dom tries to say men are hard-wired to want those things, but Albie argues that’s all just a societal construct. Portia gets an urgent call from Tanya demanding she come back to the hotel, so she leaves, and Albie blames Dom and Bert for chasing her away. “You do have a knack for repelling women,” he sneers to his dad. Harper and Daphne arrive at a gorgeous old Italian country villa, and Daphne reveals she rented out the whole place — and they’re spending the night there! Harper hesitates, but Daphne doesn’t want to invite their husbands: “Why let them have all the fun?” Oh, and back at the hotel, Cameron is pushing Ethan to invest his newfound riches with him — “I make people money, bro” — and chiding him for not tipping him off about his big business sale ahead of time. (Yep, that would’ve been very illegal.)

A despondent Tanya hires a local fortune teller to learn where her marriage is headed, but when the psychic tells her, “The cards say your husband is in love with someone else,” Tanya kicks her out for being too “negative.” (She also forces poor Portia to just sit quietly nearby while she takes a nap.) At the villa, Daphne admits she likes to mess with Cameron’s head: “We both do it. It’s like hide-and-seek.” She calls Cameron to tell him they’ll be spending the night at the villa, and he gripes to Ethan that she’s “punishing” him… but he also takes this as his green light to party. Dom tries to make peace with Albie, asking him to put in a good word with his mom, but Albie informs him: “Nothing is gonna fix this… You have to stop doing what you’re doing and actually change.” While Cameron and Ethan race around on jet-skis, Harper and Daphne take a stroll though town and get openly leered at by dozens of Italian men, with Daphne offering Harper a weed edible. 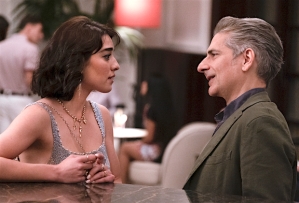 Dom tells Lucia he can’t see her tonight because he’s trying to save his marriage, so she searches for a new target — and lands at Cameron and Ethan’s table. (“Everyone cheats,” Cameron tells Ethan.) Portia confides in Tanya that Albie is “maybe a little too nice,” and Tanya warns her not to waste time “chasing emotionally unavailable men.” Still, Portia catches the eye of a hot new guy at the pool when Albie comes over and ruins it by kissing her. She awkwardly recoils a bit and makes an excuse that she just wants to crash early tonight… but she’s still eyeing that pool guy. The weed edibles kick in for Harper and Daphne as they open up about their husbands; when Harper asks if Cameron’s cheated, Daphne replies: “Maybe just once. That I know about.” But “I’m not a victim,” she insists. She does worry about what might happen to a nerd like Ethan once he gets rich, though.

Cameron and Ethan do liquor shots and molly with Lucia and Mia (“Let’s fun!” they declare), and they end up back in the hotel room, where they all dance and drink — and Cameron kisses Ethan a little? Ethan ends up hiding in the bathroom, and when Mia kisses him, he shakes his head no and she backs off. Lucia is topless and riding Cameron on the couch, though, as Ethan’s phone rings and rings nearby. It’s Harper… and she’s not getting an answer.