Jackie may never get the closure she needs following Wednesday’s tear-jerking episode of The Conners.

After a two-year absence, the Roseanne spinoff welcomed back Estelle Parsons as Jackie’s mother Bev, who was now suffering from dementia. Jackie initially convinced herself that Mom was faking it, but the reality of her Alzheimer’s set in when the 94-year-old inquired about Roseanne. 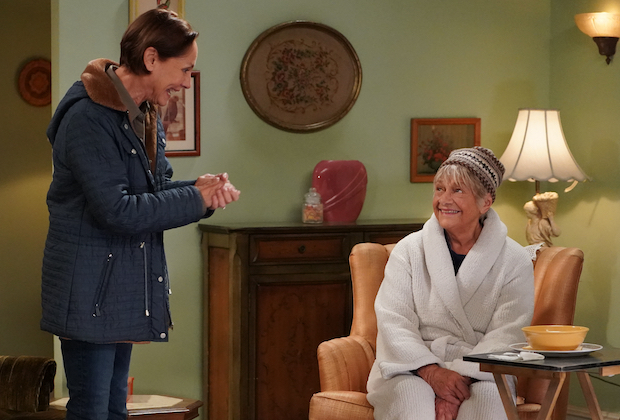 Dan agreed that Bev didn’t deserve for Jackie to look after her, and encouraged his sister-in-law to confront her emotionally manipulative mother when she appeared more lucid. But when Jackie faced up to Bev, she was met with a blank stare. Bev suddenly looked at Jackie as if she were a total stranger, then inferred that Jackie’s abusive father Al — who died midway through Roseanne‘s original run — had just asked her out on a date. That was when Jackie realized that her mother needed ’round-the-clock care.

Below, executive producers Bruce Helford and Dave Caplan discuss Bev’s return, and the toll her condition will have on her only living daughter.

TVLINE | Jackie has had all this good fortune as of late. She’s found a deeply devoted husband in Neville, she’s turned the Lunch Box into a success story… With everything going so well for her, why did now feel like the right time to revisit the most toxic relationship in her life?
HELFORD | As a result of her having all that wonderfulness in her life, what would be most important to her would be her mom’s approval. That’s the frustration. Would Bev have ever given her the benefit of the doubt? Now she won’t ever know.
CAPLAN | And to answer your question about the timing, I think when you pass through some of the big storms in your life, you start to think about unfinished business. For Jackie, the unfinished business is approval from Bev, and getting some kind of closure.

TVLINE | Did Estelle offer an opinion on Bev’s dementia and the direction of her storyline?
HELFORD | We were concerned. Obviously, Estelle is not a spring chicken, and we were wondering what her reaction would be to doing this kind of story, but she seemed delighted. She’s a person who is [still] able to perform and do all the things at her age, which is already a miracle when you think about it. She’s 94! She came to me after the [taping] and said, “That was a very good script, wasn’t it?”
CAPLAN | Everybody on the stage is very reverential of Estelle. Even after the audience bows, you saw John Goodman and Laurie Metcalf bow to Estelle. The actors, the writers, everybody involved thinks it’s an honor to have her there. And then when she’s complimentary about the script, that’s a huge treat for us.
HELFORD | She was very happy to be back on set with the gang. We showed the footage of her getting the Oscar [for Best Supporting Actress for 1967’s Bonnie & Clyde; embedded below] to the studio audience, which she was really surprised by. That was fantastic.

TVLINE | Did you have any conversations with Laurie about revisiting the Jackie/Bev relationship in this light?
HELFORD | I don’t remember her having any real notes. It’s funny, because she can play up the anger because it’s been so well established. Our thing was, “Will Jackie come off like a bully if she is confronting a woman who she believes has dementia?” But the relationship between the characters is so cemented over all these years that Jackie really was able to launch into it — you know, “she didn’t worry about my vulnerability, I’m not going to worry about hers. I want to make this statement before I can’t ever make this statement again.”

TVLINE | When Jackie invited Bev to come stay with her during the Roseanne revival, she said, “My life would be better without you, but it would be so much better if it was better with you.” But things haven’t gotten any better, and they probably never will. Has Jackie made peace with that by the end of this episode?
HELFORD | I don’t know if she can ever make peace with that. I think she is accepting that she is going to be her mother’s caretaker… But Bev is a very selfish woman, and there were episodes beyond that [one you mentioned on The Conners] where [she was considering] giving money to Harris or Mark. Bev just never supported her family, and she likes playing one against the other. 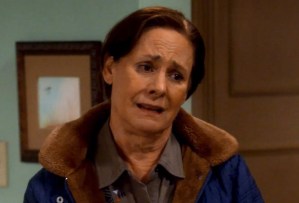 CAPLAN | I think there’s a really wonderful moment where you see Jackie realize that she is never going to get what she wants from her mother, and decides that she still has the duty and the need to take care of her. It’s all done without dialogue, and it’s powerful as hell.
HELFORD | My favorite part of that [scene] is where Jackie gets a hug, but she gets a hug because Bev thinks she’s a stranger. It’s like, come on!

TVLINE | Is that moment as close to getting closure as Jackie is going to get?
HELFORD | At this point in time, yeah. We did leave it open, because we’d love to have Estelle back… Also, for a lot of us who have been through it with our families, dementia in the beginning can be very in and out. All of a sudden one day, they’re very lucid. I had a step-grandfather who, if you gave him a tumbler of bourbon, which was ultimately what was killing him, he became completely lucid, and he was very much out of it when he didn’t have that. We may visit moments of lucidity with Bev and see what comes of that.

TVLINE | With or without a return appearance by Estelle, will we see the impact this has on Jackie throughout Season 5?
HELFORD | There are still a couple of things to be dealt with… This does have an effect on her, for sure. It will probably pop up in unexpected ways. 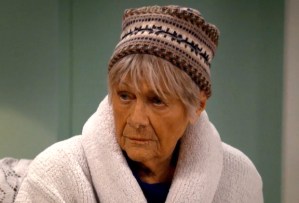 TVLINE | At one point, Harris suggests that Bev might have been suppressing how awful she was to Jackie. Do you think there’s any truth to that?
CAPLAN | People as they get older start to look back on their lives and sit with their regrets, and think about things that they could have done differently. There’s something about the later part of your life that gives you that perspective. So we did discuss whether it was too painful for Bev to really deal with, or if it was really the onset of dementia.
HELFORD | I don’t think it’s totally clear whether or not that was Bev in there, and that’s what makes it more interesting for us.

What did you think of Bev’s return to The Conners? Sound off in Comments.