Streaming Now: Netflix, Disney+ and Others 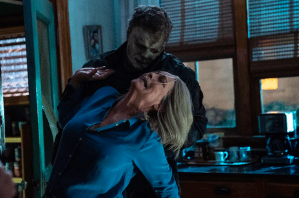 Meanwhile on Nielsen’s separate ranking of all streaming fare….  House of the Dragon (which streams on HBO Max) stayed put at No. 4 with 960 million minutes viewed across nine available episodes, trailing The Watcher, Rings of Power and Dahmer. But as always, HotD‘s linear minutes viewed on HBO proper are not included on Nielsen’s streaming chart.

And over on Nielsen’s ranking of streaming movies, Halloween Ends (which had a simultaneous theatrical release) amassed 717 million minutes viewed on Peacock, besting Netflix’s Luckiest Girl Alive, Netflix’s The Curse of Bridge Hollow, Disney+’s Hocus Pocus 2 and others. The slasher franchise finale’s running time was 111 minutes, so… do the math!