We thought Jeanine’s idol was out of the game. We thought wrong.

Despite the fact that Survivor‘s eliminated Dwight told TVLine that Jeanine “did not get that idol back,” in Wednesday’s episode, we learned that did not mean it was flushed from the game. (Sneaky, sneaky Dwight!) Before that last Tribal Council, Dwight actually passed Jeanine’s prized possession off to Jesse, who was also holding onto Cody’s idol! When this week’s show picks up, Jeanine, however, is none the wiser, and since Cody never asked for his idol back, Jesse now possesses two of ’em. Did he just become a power player almost by chance?

It’s a bit ironic that we’ve seen so much idol/advantage swapping (as if we needed to be more confused as to who’s holding what), but we have yet to see any of these items cause any real havoc or chaos. And after this episode, we’re still waiting for some fireworks to shake up this season. Sigh. I digress. But let’s “dig deep” into this week’s episode anyway.

Owen shares his story of being adopted and growing up feeling out of place. Lo and behold, he’s feeling on his own in Fiji as well, and hopes that others who are playing alone can band together, i.e. Noelle, Gabler and Jeanine. The seven in the majority (Jesse, James, Cody, Ryan, Cassidy, Sami and Karla) are starting to count their chickens, with James telling multiple people that he wants Owen out ASAP.

While some players relish in the fact that they’re more or less safe for the next few Tribals (lolz), Sami knows he’s on the bottom of that seven. He approaches Owen and Jeanine about turning the tables on some of the bigger players, but they need to secure one more vote to pull it off. 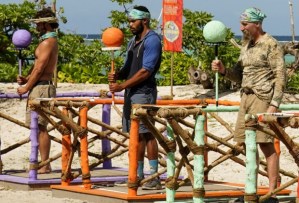 IMMUNITY IS UP FOR GRABS | How about that drone shot, huh? (I’m going to say it: Survivor doesn’t get enough credit for its gorgeous cinematography. Where are all the Emmy voters at!?) After a sweeping, rollercoaster of an intro, Jeff tells them they’ll be balancing a ball on a pole. As time passes, they’ll add extensions to the pole making it more difficult. But there’s a twist. The host offers them a bag of rice, enough to last them four days, but in order to secure the bag, five players must sit out of the challenge and give up their shot at immunity. James, Sami, Karla, Jesse and Cassidy all agree to sit out, giving Owen the opportunity to snag that highly coveted (and highly needed) immunity necklace.

STRATEGY | With Owen safe, Gabler, Noelle and Jeanine could be in danger. Jeanine quickly becomes the next target. Cody believes they have “full control” and that they’re “steering the boat,” but… are they really?

Sami approaches Kayla about flipping the vote on Ryan, and she’s open to it. She pitches it to James, and he also seems game. Soon enough, everybody’s got “Ryan” on their tongues. After some consideration, James urges the group to take Jeanine out as originally planned, but Cassidy isn’t having it. 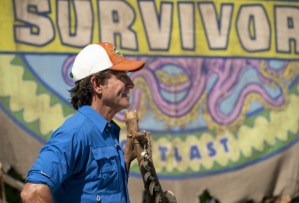 TRIBAL COUNCIL | Jeff begins by asking if the group has a sense of the season’s established social contract. It’s a relationship game, says Gabler, but the subtler the better. Karla notes that if your game is too subtle, the jury won’t see your moves and may not award you with the million. But the game is fluid, adds James, which makes building momentum a challenge.

Ryan reveals he caught 21 fish that day, which is an interesting flex with a vote looming. He hopes that since he’s providing lots of food, they’ll keep him around. (Spoken like a true guy-who-doesn’t-know-everyone’s-already-been-considering-him. This isn’t Season 3, dude!)

So will the majority of seven stick together? Jeff calls for idols and advantages and AGAIN, nothing is played. (It’s astonishing that not a single idol or advantage has been played thus far.) The votes all fall on Jeanine and Ryan, but it’s Jeanine who becomes the unlucky first member of the jury. (Read our exit interview with Jeanine here.)

Next week, two immunity necklaces are up for grabs, and two people are going home!

Did Jeanine ever have a chance of surviving that vote? Who are you currently rooting for? Drop some comments below.