This Sunday night, in a specially scheduled episode of CBS’ FBI (which is preempted this Tuesday by Election Night coverage), light was shed on whether Special Agent Nina Chase would stay with Jubal’s team once Maggie Bell returns from medical leave.

As previously reported, series vet Missy Peregrym will return on-screen from her maternity leave in the Tuesday, Nov. 15 episode; when Maggie was written off the show in April (after being exposed to a deadly toxin), Shantel VanSanten’s Nina essentially filled the void on the team.

But as revealed at the close of Sunday’s episode, Nina has decided to transfer to the white collar crime division two floors down… after discovering that she is pregnant with Special Agent Stuart Scola’s baby. Though what she plans to do about said pregnancy remains TBD.

TVLine has learned that VanSanten will thus remain on recurring status with FBI, though she will no longer appear in every episode. 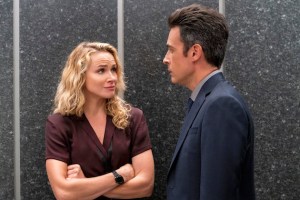 “I’m pregnant. Found out last night,” Nina told Stuart midway through the hour, after she got dizzy while rifling through a POI’s belongings. “I thought I had the flu, I just didn’t consider that I was….”

When Stuart asked Nina what she planned to do about their baby, she admitted, “I don’t know, I don’t know,” before they returned to the case at hand.

At episode’s end, after Nina had bravely posed as a Chechen defector who was being turned over to terrorists who wished her dead, we and the other agents saw her privately meet with Special Agent in Charge Isobel Castille. Afterward, Nina came out to tell OA, Stuart and Special Agent Tiffany Wallace, “This is gonna be my last case with you guys for a while…. I need to take some time and clear my head. But I’m just going to go down to White Collar, to take on all the dangerous dudes doing insider training.”

Stuart then walked her to the elevator and asked, “Why are you really leaving?”

“I just need some time to figure things out — what I’m go to do with my life. and you,” she answered. Nudged again about whether she’ll keep the baby, Nina maintained, “I don’t know. I guess I just need some time….,” before she entered the elevator to leave.

But after flashing a sad smile, Nina lunged for and stopped the door from closing, then rushed to and kissed/hugged Stuart, crying. “I’ll call you, OK?” she said before truly leaving.

How do you feel about Nina transferring out of Jubal’s team? And do you think she will have the baby?