The first — and prior to now, the last — time Bradley Whitford directed an hour of television, it was the spring of 2007. The show was NBC’s Studio 60 on the Sunset Strip, and he was one of its stars.

The show was cancelled not long afterward.

“I killed Studio 60, actually,” the Emmy-winning actor joked during a recent chat with TVLine. “A lot of hopes for that show, and then the finale came on.”

Whitford now stars as Commander Joseph Lawrence in Hulu’s The Handmaid’s Tale and marked his second directorial stint with this week’s gutting episode, “Allegiance.” (Read a full recap.) Read on to hear his thoughts on going behind the camera — while still staying in front of it for a lot of the pivotal episode — and his excellent tease for next week’s Season 5 finale.

TVLINE | I want to talk to you about this episode you directed and were in a lot, which is not something that we often see.
Or that I expected. [Laughs] You never know what you’re going to get, and I naively thought, “Well, it would probably be a bottle episode that takes place in the studio, that I’m not in.” And then I read the outline and I was like, Jesus, like, I’m in a lot of this. That was a surprise, and it was not a bottle episode. [Laughs] There’s all this crazy s–t going on.

TVLINE | There’s some ambiguity in who gave June the intel that led to the failed mission, but c’mon: Lawrence was involved. Or am I reading that wrong?
I think he says [that] this is exactly what he’s trying to avoid. I don’t think he is in magical, total control of Gilead. And even if he were, that’s a very tenuous place to be, because you can end up on the wall real quick. So, no. Do I think he intentionally tricked her? I don’t know what that would do.

The fundamental question that some people have asked about it is: Is this Lawrence turning into a pragmatic, ambitious power seeker? I don’t think so at all. I mean, that happened years before you met [him]… I don’t think Lawrence has any interest in power for its own sake. I think what has developed here is there was a fearlessness about him when June — I mean, my God, the Fred stuff, the angels flight. There was a recklessness to him, and I think he sees an opportunity that creates an interesting, unfortunately relevant conversation about at least a little bit further down the line in the world of Handmaid’s.

… Part of what makes [June] such a compelling character is… she’s blown on the spark of decency in him… That’s why the relationship is so interesting and why it’s so painful. The phone call is so painful. There’s something very familial, a loss of something there that is not easy. It’s not just a power dynamic. 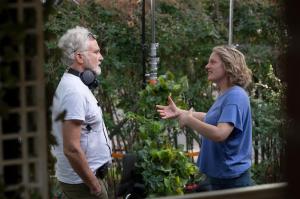 TVLINE | You directed an episode of Studio 60 on the Sunset Strip, and that’s the only other time you’ve directed, right
Yeah. I was going to direct on West Wing. I had always wanted to direct on West Wing, and then I pitched a story to [executive producer] John Wells that I wanted the writers to work on. John surprised me by saying, “That’s a good idea. I think you should write it, if you can write it like in a week.  But if you write it, you can’t direct it.” [Laughs] And I ended up loving that and got to write another episode the next year.

So, yeah. I killed Studio 60, actually. I actually killed it. A lot of hopes for that show, and then the finale came on.

TVLINE | Aside from that murder: How did the two directing experiences compare?
Both of the times I’ve directed, it’s a very safe way to do it. I’m working with actors who I know and love, I’m working on the shows I know and love. I’m not dealing with what most directors have to deal with, which is this paradox of having to be an authority figure when you’re a stranger. It was funny, because actually, I for a long time hated, hated, hated to watch anything I was in.

And I remember [Studio 60 EP] Tommy Schlamme getting upset with me when I was prepping on Studio 60, because all of a sudden he’s like, “You don’t watch the show, do you?” And I was like, “No, but I know how you do it. [Laughs] You know? I’m there every day!” And on [Handmaid’s], I’ve gotten better at watching… In this show, you’re intimidated if you’re an actor by what the spectacular visual nature of the show. And I didn’t know why I was rewatching it, but it initially was intimidating. And then it got me really excited because of all the different things you could do, visually, with it.

Also: Nicola Daley is just underpaid.[Laughs] I have no idea what she makes, but she’s a [director of photography] who came in this year who was just extraordinary to work with.

TVLINE | Before you go, what can you tease about next week’s finale?
What can I tease? June’s not safe in Canada anymore. Or, Canada’s not safe anymore.