Warning: The following contains spoilers from One of Us Is Lying Season 2. Proceed at your own risk!

Given how One of Us Is Lying‘s Season 2 finale wraps up, it’s no surprise that star Marianly Tejada was scared about what the cliffhanger ending means for her character Bronwyn Rojas.

In the episode’s final minutes, Murder Club thinks they’ve finally put behind them all the pain and fear that came with Jake’s death and tormentor Fiona (aka Simon Says). But then a flash-forward to graduation day reveals a bloody crime scene in the school, and the “Stay” necklace that Nate had so sweetly gifted Bronwyn is among the evidence.

“Oh my gosh! I think they knew that I was going to be very worried, because before they sent us Episode 8 to read, Erica [Saleh], the showrunner, so sweetly came up to me and was like, ‘I just want you to know…'” Tejada recounts with a laugh. “And I was like, ‘Oh, my God, Bronwyn dies! One hundred percent!’ [Laughs] She’s like, ‘I just want you to know that we don’t know exactly what’s going to happen, but don’t freak out, because there’s no way that we can take Bronwyn out of the picture in this way or that way.’ And then I understood what she said once I read the script. But yeah, we actually don’t know what’s going to happen, but something bad happens, for sure.”

In addition to pondering Bronwyn’s role in the crime scene, Tejada also spoke to TVLine about Nate and Bronwyn’s relationship milestone, and about rocking out to Chris Isaak’s “Baby Did a Bad Bad Thing.” (For more scoop on the finale twists and what’s in store in a potential Season 3, check out our Q&A with showrunner Erica Saleh.)

TVLINE | Do you think Bronwyn’s a victim or a suspect in that flash-forward?
I mean, who knows, to be honest. From an audience standpoint, I’m still kind of coming up with theories in my head about what could’ve happened. But my instinct says she is a victim. 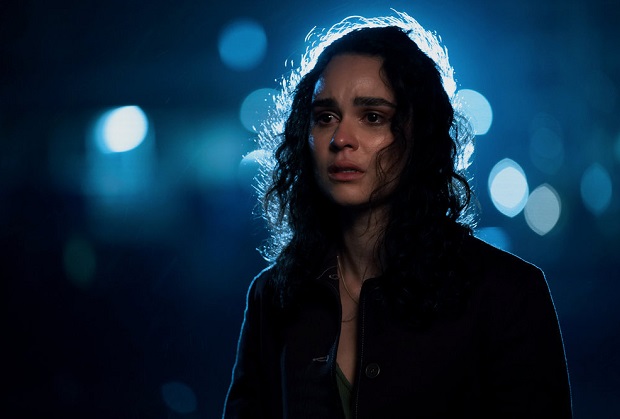 TVLINE | In the finale, she says, “I feel like I’m dreaming,” and Murder Club feels like they’ve put this behind them, and that it’s over. But I don’t think they know yet about Fiona being poisoned, and then we have this flash-forward to the graduation. So how do you imagine she would handle being thrust back into all of that?
Oh, my God, I couldn’t begin to imagine what it would be like for all of them to have to face yet another tragic situation. I feel like they’ve gained some skills along the way to kind of cope and deal with these kind of situations. All of them are operating from a very survival instinct point, because they don’t have much control over the situations that happen. It’s usually always, like, an outsider or an outside element that’s kind of threatening their lives, and they just take it one day at a time, and just try and survive, and do the best that they can with whatever’s thrown at them, which we’ve seen in Season 1 and Season 2 could be just extremely intense and chaotic circumstances.

TVLINE | It’s interesting you say that all the stuff is coming at them from the outside, but in Season 2, we kind of see them become a little bit more at fault for some of what’s happening. Like, they come up with the idea to frame Fiona, and Fiona’s not a good person, but do you think that Bronwyn has some guilt for doing that?
For sure. It’s one of those situations where it’s like, what’s the least bad situation, for the lack of a better phrase? What’s the least damaging circumstance that we can put ourselves in? Because they start off in Season 2 being guilty of hiding Jake and, literally, committing a crime together. So this season, they’re really not facing the light, meaning first season, we were all innocent, and then this season, we really have something to hide, and we’re guilty of a crime. So at that point, it’s like, OK, well, what’s the best-case scenario out of all the bad scenarios that we have here? And that’s how they choose how to operate, and they come up with the idea of framing Fiona from that point. It’s like, “Well, she’s already a bad person, and we know that we’re good people, that we had to do what we had to do with Jake, because Jake was a bad person that was going to kill Addy, basically. So we’re just defending ourselves, and, like, it’s better her than any of us.” 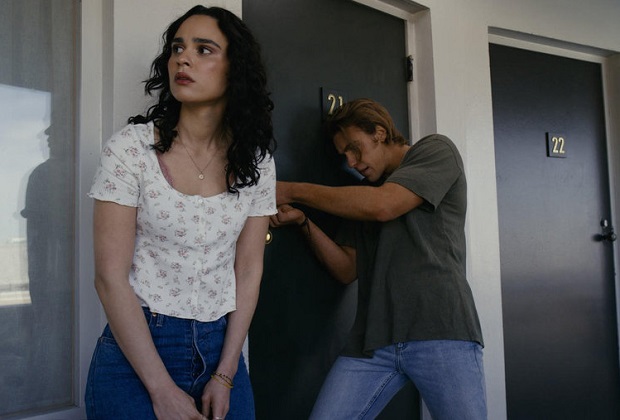 TVLINE | Nate and Bronwyn took some big steps forward in their relationship. What did you enjoy about their journey this season?
My favorite thing about their journey is that because they start off with the very dark point of Jake’s death, and them having to cope and deal with that, I think Nate doesn’t really expect Bronwyn to act in the way that she was acting and be so in control of things. So his perception of her shifts, and he’s like, “Well, I don’t know who you are anymore,” and that kind of prompts them to communicate better, and that’s why we see a breakthrough in their relationship. It’s because, in the beginning, they’re all assuming so many things about one another, and miscommunicating things or not communicating enough. And then they’re like, “Wait a minute, we have to sit down and address our differences, and kind of just put all this behind us,” if that’s even a thing that they could do. But it does make them communicate and see what each other’s perspective is, and what it’s like to be in Nate’s shoes, and what it’s like to be in Bronwyn’s shoes, and they can understand each other better, and that’s why their relationship starts flourishing.

TVLINE | They have so many great moments in Season 2 together, but do you have a particular favorite for them?
Based on filming it, and I just watched Episode 5, literally, like a few hours ago, the final cut, and I really loved their sex scene, because it was just beautiful. It was like time really slows down, and they were waiting for this moment, both of them, to happen for so long. I really loved what Roxanne Benjamin, our director, did in terms of like, “I want Bronwyn to be more in charge than we would expect her to be,” because Nate is the one that has all the experience in that department, but Bronwyn is so sure that she wants to do this. And Nate’s the one that never had this, like, really intimate experience with a girl before, because he actually loves Bronwyn. So he’s the one that’s a little bit more scared and cautious, and she’s the one that’s so eager to get down to business and is in charge, and that’s a very beautiful thing that we don’t get to see in TV very often. So I was really glad that we took that approach and with what the outcome is. I was really, really pleased.

TVLINE | Do you imagine that Season 3 will test them, or bring them even closer together?
I could only imagine that they’re going to be tested again, because the circumstances that they’re living in are just so extreme, that there’s no way that there won’t be little cracks along the way, if not big cracks, in their relationship. And also, they are very different, and I’m curious to see what being in a relationship actually does for them. Maybe they realize at some point that it is going to be harder to navigate their very two different realities, or if it actually brings them closer. I’m also very impatient to see what the journey will be. 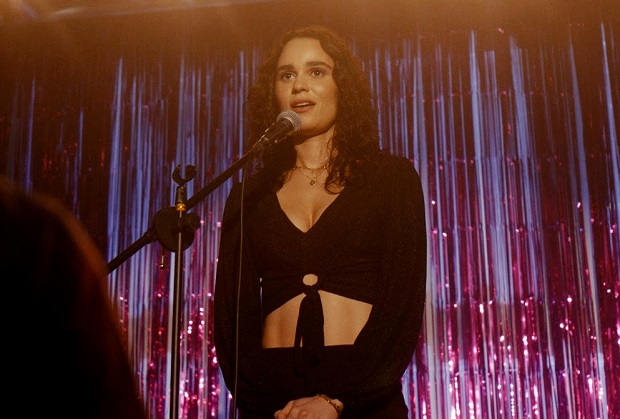 TVLINE | What was it like filming the karaoke scene in Episode 5?
Oh, my God, it was so nerve-wracking! [Laughs] But everyone was so supportive, and Roxanne is such a great guide and director. I think the first time that I got to sing the song for everyone live, I was so nervous, and then she was like, “OK, that’s out of the way. Now have some fun.” And then after that, I was just vibing out. It was fun.

TVLINE | Did you have experience singing, or was that sort of your first time singing in public?
No, I’ve never sang, professionally, before. But I do love some karaoke. Erica came up with the idea of that scene because we actually went out and did some karaoke when we wrapped the pilot back in 2019. And I think that it just stayed in their minds that I have some fun singing karaoke, and that’s why she wrote the scene. [Laughs]

TVLINE | It’s such a on-the-nose song choice for her. Was that song pick in the script already, or was that something that was brainstormed and discussed with you first?
I think we all brainstormed. Erica, Roxanne and myself, we kind of went back and forth, sharing songs, and we just agreed that it had to be kind of like a dark song, but also like a powerful song, because this is kind of Bronwyn’s character climax in this season. This is the most unlike-Bronwyn thing we see her do. It couldn’t be too much of a romantic song or too mellow. It had to be kind of rock-ish, because I think that’s her vibe. She’s very much into ’90s rock, or at least that’s the music that I listen to or is on Bronwyn’s playlist. So we just went back and forth about a few songs, and I think it was Roxanne that then said “Baby Did a Bad Bad Thing,” and we just knew that that was the one. 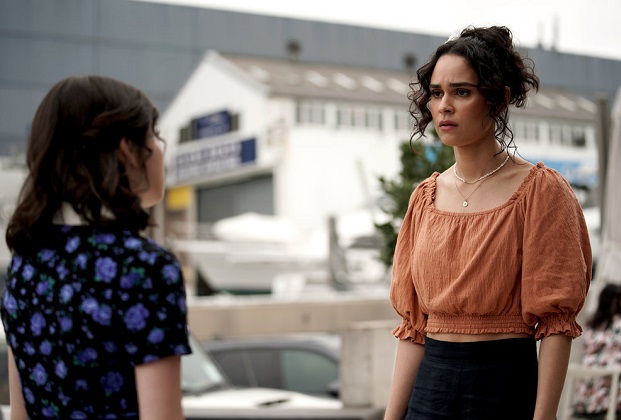 TVLINE | I also wanted to touch on Bronwyn and Maeve, because their relationship is in such a bad place at the end of the season after Maeve secretly teamed up with Fiona. Can they move past this? Do you see a world in which Bronwyn can forgive her sister?
I think that one hundred percent, they’ll get past it, or I would hope so, just because they’re sisters. I think if it was just a friend, it would be easier to excuse yourself, and be like, “Well, we just don’t see eye-to-eye.” But sisters is just something that you can’t break out of, especially for them, because they’re from a Hispanic family. Family is everything and just first. But it will take time, and it will take a journey, and they’ll probably be disagreeing for a little bit longer before they can actually move past it.