Not all advantages can save you from Jeff Probst’s ruthless torch snuffer.

In Wednesday’s Survivor, Geo Bustamante was chosen to go on a magical Fijian journey where he became the lucky recipient of the Knowledge Is Power advantage. Despite that sliver of good luck, it was his lack of knowledge about his tribe, ironically enough, that prevented him from rising in the ranks, and he was booted from the game in a 3-2 vote. (Read a full recap here.)

Knowing he was on the bottom, why did he feel so comfortable and does he have any hard feelings toward Karla? Plus, did Ryan really throw that immunity challenge? We asked Geo all of this and more in our Q&A below.

TVLINE | What was it about Cassidy that made you and Ryan want her out so badly?
GEO BUSTAMANTE | Look, I’m not trying to be negative or say anything bad about anyone. I respect everybody’s game. But with Cassidy, we had a few disagreements. From my point of view, it started with me chopping cassava. Since I was always on the bottom, I was trying to do as much as I could to keep everyone happy. Then one random day she looks at me and goes, “You should start chopping the food in different shapes so we can feel like we’re eating something different.” I looked up and was like, “Did she really just tell me that?” I’m tired! I wake up, go look for food and idols in case I’m going home… I’m busy all day! By the time I’m done cooking, I’m putting the last piece of yucca in my mouth before we go to a challenge. I’m always doing something, and felt some type of way about that. I had to walk away from that and I spoke to Karla and Ryan like, “I can’t believe this is happening!” It’s Survivor! Why are you complaining about food? There are so many people dying to be on the show. I’m excited that I’m not eating enough!

Fun fact: I told Karla and Ryan what happened, then Karla went and told Cassidy what I said, and Cassidy got mad and came back to me saying, “Somebody told me something, but I’m not going to tell you who.” I was like, “I know who, it was Karla.” I confronted Karla about that and said, “I know you’re working with them, but I really want to work with you. Please, give us a chance. It could be me, you and Ryan all the way until the end.” But she obviously ended up choosing the other side.

TVLINE | Why did you and Ryan feel so comfortable and how much did Karla factor into that?
I’m going to tell you right now, I got comfortable. I do agree with that. I felt like I was safe to a point knowing that I was working with Karla and Ryan, but I was always scared. I was always on the bottom, but no matter what, I didn’t want to lose a challenge because it could be me going home. This being confident thing, I don’t know where it came from. I don’t remember being that confident. I don’t want to blame it on the editing because at the end of the day, that’s what I did when I was on the show, but I was scared. I was trying to not be paranoid in front of everybody, and give them a reason to vote me out. But I still got voted out. 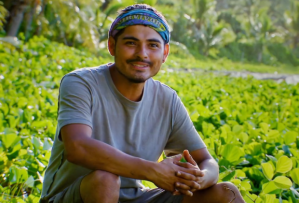 TVLINE | Looking back at last week, the women seemed to think you were power hungry. What’s your take on that?
It’s funny because all these things that were said about me being power hungry… I don’t remember any of that stuff! I’m not going to lie to you. I’ve seen the edits and the way they position certain words and certain things. I can see how it came across that way because even watching myself on TV I was like, “When did I say that?” or “How did I say that right after this happened?” I was trying to put things together. And calling the shots? I was excited about something that was happening, but there was a part where I was telling people what to do on the show. We actually had a full-on conversation about who should be going home and why they should be working with me and not with so-and-so. I remember saying, “You’re voting for Cassidy, you’re voting for Cassidy… OK, cool.” You can just grab the end of that conversation and make me look like I’m the one who’s telling people what to do. I’m a very shy person in real life. Going on Survivor was the challenge of my life. I challenged myself to step outside of my comfort zone. That’s not what I do, I don’t tell people what to do or give people orders because that’s not how I am.

TVLINE | Do you know for certain if Ryan really did throw that immunity challenge?
Before the challenge, he asked me, “What if I throw the challenge so that Cassidy can go home?” I was like, “Don’t do that! I’m at the bottom, I could be the one going home!” I get it. I felt like Karla wanted to work with us, and that made me feel a little more comfortable, but I was able to tell that something wasn’t right. I didn’t want to risk it just so we can take Cassidy out because that could actually backfire, and it did. I don’t know if he threw the challenge or not. He was doing really well. We almost won that challenge, then out of nowhere, boom. 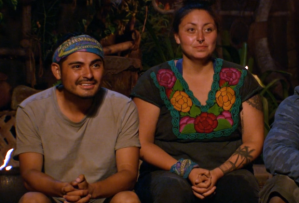 TVLINE | Had you survived the vote, what was your plan going to be for the Knowledge Is Power advantage, and did you know about Karla’s idol?
I was super excited to get the Knowledge Is Power advantage because it was like a dream come true. I was looking for an idol every day because I was like, “Maybe if I find an advantage or idol I can protect myself from going home,” but I never found anything. I climbed every single tree. I didn’t want to go home and say, “I should’ve climbed that tree. I knew that tree looked weird!” I didn’t want to go home with regrets.

After I got that advantage, I was the happiest person. I knew there were two tribes working against us, so I wanted to share it with my alliance. I wanted to use it for us. It wasn’t just a me thing. That’s why I’m kind of confused where the whole “power hungry” thing comes in. I wanted to use it for the people I was working with. I wanted to be loyal with someone and take another tribe’s idol and use it to our advantage. I ended up sharing that information with Karla with hopes that she would trust me a little bit more and would maybe want to work with me. It didn’t work. I feel like I was already a sitting duck, [and people were] waiting for me to just leave at that point. But you never know! The entire Lindsay-getting-paranoid thing happened at the last minute, and I ended up staying another episode. I was just hoping for the best to be honest.

TVLINE | Any hard feelings toward Karla at all?
I did feel some type of way at first because we had a connection. She came up to me and was like, “You’re LGBT, I’m LGBT. You’re Latino, I’m Latina. We’re both minorities, we should work together.” I didn’t want to approach it that way because I didn’t want to work with someone just because of their sexuality or race. I wanted to do it because I feel your energy and you’re a good person. So that’s why I felt a certain type of way because I decided to put my heart into whatever conversations she and I were having. It did hurt a little bit, but I’m over it. That’s part of the game. There’s no rule against that. She was smart to use that to her advantage and earn my trust, and eventually take me out. There was so much they didn’t get to show. We had a lot of nice moments and conversations, her and I, but they didn’t show any of that. That’s just part of the game. That’s what makes Survivor beautiful. That’s why people love it. People like the backstabbing and the craziness that’s happening. I’m still watching. I’m still a fan of Survivor. Even though I didn’t like myself on last week’s episode as much because that’s not who I am, that’s fine. That’s what makes it a really good show at the end of the day. 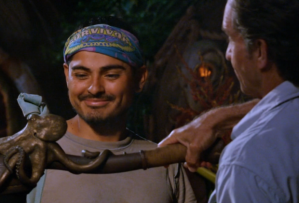 TVLINE | You shared your coming out story on the show and explained how it severed your relationship with your parents. What has the reaction been from viewers?
I didn’t want to share it at first because I was scared that people might look at my family like they were mean or homophobic. But I felt like it was important for me to share that story so that other people like me who have gone through what I’ve gone through can see that this could be you. You could be going through depression. You could question being alive, but don’t give up. Just keep pushing because things are going to get better. You’re going to get what’s yours and maybe someday you’re going to be on Survivor and have your dreams come true. That’s what I wanted the world to see, and I just went for it.

I’ve been getting so much love from people. Not just LGBTQ people, but also straight people messaging me saying, “My son is gay, my so-and-so is this,” and seeing people like me, I guess, opens their eyes. Not everybody is as fortunate. Not everybody has their entire family. I have mine now. I have my chosen family, the friends that I have. But that’s what I wanted to show the world. The love has been amazing and I’m grateful for that. At the end of the day, I didn’t win Survivor, but if I can help somebody out there and somebody sees my story and reaches out to me like, “Hey, thank you so much for sharing. I really needed to hear that,” to me, that was all worth it. If I made a difference to at least one person out there, that makes me feel really happy. I’m humbled to have that experience.