It’s been a long time since we’ve seen gameplay that bad.

I realize this is very much not a Big Brother recap (thankfully), but remember in Season 13 when Lawan Exum said he was OK with being evicted because he thought he was going to re-enter the game (?) with a superpower (?!). That was the first thing that came to mind while watching Wednesday’s Survivor as Ryan rattled on and on about his grand plan of sabotaging the immunity challenge so Coco could oust Cassidy. And in a surprise to absolutely no one in the Survivor fandom, Cassidy did not go home. (WHAT IN THE WORLD WAS HE THINKING?!)

Fortunately for Ryan, he won’t be the eliminated player I speak with Thursday morning, but unfortunately for him, it was his alliance-mate Geo who took the fall. This episode was absurd. For many reasons. But before I dive too deep into the WTF moments and sheer cluelessness that infected Coco in Episode 5, let’s just take it from the top.

Immediately after Tribal Council, Cassidy wants to know who wrote her name down and why. It was Geo, Coco’s resident space cadet. The man who thinks he and Ryan are totally running their tribe. (Spoiler alert: They are not.) But the rest of the tribe doesn’t mind letting their egos and big heads run wild. 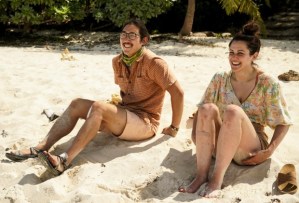 BAKA | Jeanine’s chin seems to be healing nicely. Oh, maybe that’s not actually the Baka highlight here. Jeanine finds the Beware Advantage, and after Elie assures her that they have plenty of votes to cut Gabler, she tears it open. Oh, great. We have to watch the beads fiasco again. (The producers really missed a golden opportunity here. Why not have each of the tribe’s Beware tasks be different, so we’re not stuck watching the same thing over and over?)

The second Elie says, “Let’s not tell Owen,” guess who strolls on by! The women have no choice but to share the info. Owen decides to use this as an opportunity to secure an alliance with them. Then, Elie tells Sami about it, but unbeknownst to her, Sami’s been wanting to get Jeanine out. Of course, everyone forks their beads over, and thus, bracelet idol is activated. Sami later spills the tea to Gabler. (Isn’t this just so much less interesting the third time around?)

IMMUNITY IS BACK UP FOR GRABS | Tribes will navigate a series of obstacles transporting water into a bucket that will eventually lower a gate. After that, one castaway must roll three balls up a ramp and get ’em to stay on top. The winning two tribes will snag a tarp in addition to safety from the vote.

Coco is first to drop the gate, with Ryan taking on the ball game. (IT’S NOT A PUZZLE, YOU GUYS!) Dwight steps up for Vesi, and Sami for Baka. Dwight seals the deal for his tribe, while Ryan knocks his two balls off of the platform! Unfortunately for Coco, that mistake is sending them to back-to-back Tribals. Then, Vesi selects Geo, Jeanine and Jesse to go on a journey. 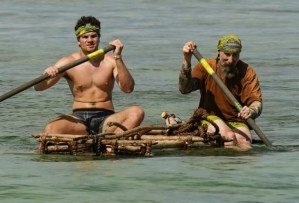 After the fact, Ryan tells us he blew the challenge on purpose, so they could get Cassidy out. Oh, boy. We aaaaall know what happens when challenges are thrown, right? Has Ryan… never seen the show he’s on? This isn’t going to go well. (Or maybe he’s trying to cover up for how poorly he did? Who knows?)

COCO | Back at camp, Ryan is fine with telling Cassidy that the vote is on him (LOL), and then tells Karla to make sure nobody strategizes with him (wow). I barely know what to say here, but since this is a recap, I’m gonna have to come up with something. OK: If Ryan gets voted out, where does he fall in the Dumbest Survivor Moves of All Time ranking? Under Erik Reichenbach, but above James Clement? I’m getting ahead of myself.

“If this plays out, I’m gonna have some ink on my Survivor resume,” Ryan tells us. Sure, Ryan.

JOURNEY | The three chosen players row to the island this time, as Geo tells them the danger he was in the night prior. It’s a ploy to try to get the others to hand the advantage over to him. And it doesn’t work. Despite Geo’s sob story, all three of them risk their votes.

Jesse opens his shell in front of his tribe: He loses his vote, and so does Jeanine. Geo lies to Coco and says he protected his vote, but he tells Karla the truth. His advantage? The Knowledge Is Power thingamajig. However, the only advantage at Coco beach right now is Karla’s immunity bracelet, but he doesn’t know about that. Now that Coco knows Geo won something on his journey, they want to swing the vote to Geo, which rattles Cassidy to her core. Her paranoia gives them Lindsay flashbacks. Should they just cut her instead? Will they? 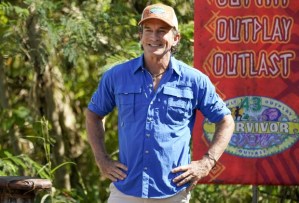 TRIBAL COUNCIL | Jeff asks about momentum and Ryan starts talking about synergy? (Or something. I didn’t really follow that.) He also takes blame for the challenge. It’s a pretty poor attempt to draw attention to himself, not to mention it’s fishy as hell.

The focus shifts to Geo, who is busy playing dumb. (Or maybe he’s not playing?) Ryan says he hopes that if he’s voted out, the vote keeps everyone unified. Jeff asks if he wants them to add a little smiley face when they write his name down, and I love that our host with the most is calling out how RIDICULOUS Ryan sounds right now.

It’s time to bring this dog and pony show to an end. Everyone votes, Jeff tallies: Cassidy gets two votes, but the other three are for Geo. And just like that, the Knowledge Is Power advantage is flushed from the game. (Read our exit interview with Geo here.)

Next up: The merge!

Please tell me all of your thoughts on Geo and Ryan’s gameplay by dropping some comments below!