This week on Disney+’s Andor, as the Star Wars series entered the back half of its freshman run, Cassian learned that all the credits in the world can’t restore the life he had, while Mon Mothma and Dedra both saw bold moves pay off.

As the Imperial garrison heist made headlines, CASSIAN slipped back to Ferrix in the middle of the night, rousing MAARVA and EMO from their respective slumbers. Cass announced his intention to spirit everyone away, that night, to a new life, but Maarva begged off, claiming she was too tired. Cass bided his time by checking in on BIX, who is still sporting a nasty gash above her eye from that fateful day. She is frankly astonished to see him back on Ferrix, partly because the town kinda sorta blames him for the new Imperial presence. Cass assures Bix, at her suggestion, that he will soon be gone. But he also asks her to let her “buyer” (Luthen) know that he held up his end of the deal, and as such expects to be forgotten. 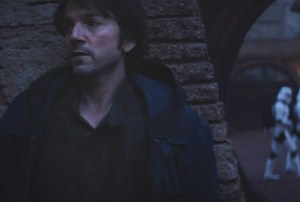 Cass slips Bix the 12K in credits he owes for past this and that, then slips back out into the night, dodging stormtrooper patrols. As he does so, he flashes back to his childhood, and seeing his father, Clem, draw a clone trooper patrol’s attention. The troopers raise their rifles at the local man, but the memory doesn’t connect the tragic dots we know to follow. Come morning, Cass returns home to learn that Maarva has no intention of packing up and leaving. “What’s left to keep you here?” he asks; “The Rebellion,” she answers. Maarva says that whereas she used to always avoid the square where Clem wound up hanged, she walked through it smiling, after hearing of the garrison robbery. “People are standing up, and there is work to be done,” she explains. Maarva understands that Cassian cannot stay, just as much as she cannot leave. And that it’s OK if he misses her, because that if, after all, love. And she has never loved anymore more than she loves her son. Maarva sends Cass on his way, but not before urging him to bail on his search for his sister: “There were no survivors” on Kenari, she asserts.

LUTHEN is at his shop, glued to his secret radio listening for reports on the garrison raid, when MON MOTHMA pays an unexpected visit. Under the guise of her exchanging Perrin’s gift, she covertly but angrily confronts Luthen about the robbery. “Revolutions are expensive,” he shrugs, and since she has run into problems accessing funds…. Mon Mothma says that she thought he was just starting to build a network, but Luthen makes clear it is already up and running, and that it “grows or it dies.” Mon Mothma worries about how Palpatine will react, but Luthen welcomes the obvious retaliation. “It’s time to force their hand,” he argues. There will be “no rules” going forward.

Some time afterwards, we see KLEYA sneak off to a secret rendezvous with (glam!) VEL, and it becomes clear that Luthen’s dutiful assistant/rebel ally is more of a player than we thought. Vel assures Kleya that the stolen payroll is safe, but Kleya says that “Clem” aka Cassian Andor is a far greater concern. “We can’t have him walking around with Luthen[‘s role] in his head,” she says, so Vel is hereby tasked with finding/killing him. “This is what a revolution looks like,” Kleya sniffs. 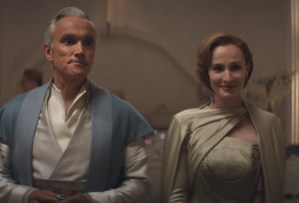 That night, at a soiree hosted by her and Perrin, Mon Mothma chats up TAY KOLMA, an old college chum who works as a banker on their home world of Chandrila. She tries to feel out his political leanings/deviances, only to put him on the defensive, as Tay mistakenly believes Mon Mothma to toe her party’s line. Mon Mothma is amused by the incorrect inference, saying, “It’s a lie, the Mon Mothma people think they know.” She explains that she is being aggressively spied on and cannot access her family accounts, and as such needs Tay’s help in setting up a “Chandrilan outreach program” that will appear to be yet another of her “benevolent irritations,” but in fact will finance…. Well, Tay is “better off not knowing,” she smiles. 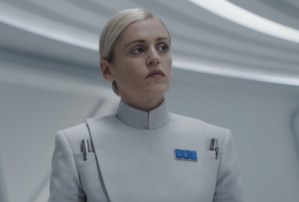 Meanwhile at the ISB, COLONEL YULAREN announces that in the wake of the robbery, any planet found harboring the thieves will be hit with a fine “five times”  the stolen amount. He also says that PALPATINE has signed bills that “free our hands” when it comes to search and seizure, and that make any indirectly related criminal act a Class One Offense. Afterward, DEDRA MEERO tasks her attendant with quietly compiling a 10-year scan of all missing avionics, comms and targeting equipment — for as she believes, Aldhani was no mere robbery, but “an announcement.”

Later, BLEVIN announces to PARTAGAZ in front of everyone that he wishes to lodge a charge against Meero, accusing her of “overreach.” Dedra takes the public flogging in stride, saying that she was merely gathering hard data, as Partagaz had suggested, to support her theory about a “focused effort to acquire highly restricted military elements.” (And sure, maybe along the way she used the Imperial Emergency Act to gather intel without proper sanctions!) Partagaz makes no secret that he is impressed by Meero’s actions, and wonders aloud what the ISB could accomplish if “everyone showed the same kind of endeavor.” Partagaz reassigns Morlana to Meero’s domain (snarking at Blevin, “It’s of great interest for her and a distraction for you”), but advises her privately after, “Watch your back.” 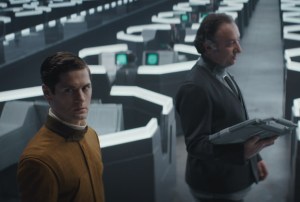 Elsewhere, SYRIL weathers his mother EEDY’s admonishment about the tailored brown suit he plans to wear to his first day of work at the Bureau of Standards, where Uncle Harlo has swung him a job in the… Fuel Purity division. Syril’s supervisor takes note of the Morlana One nastiness on his resume, but says he will scrub it before putting the new hire into the massive, cubicle workforce. 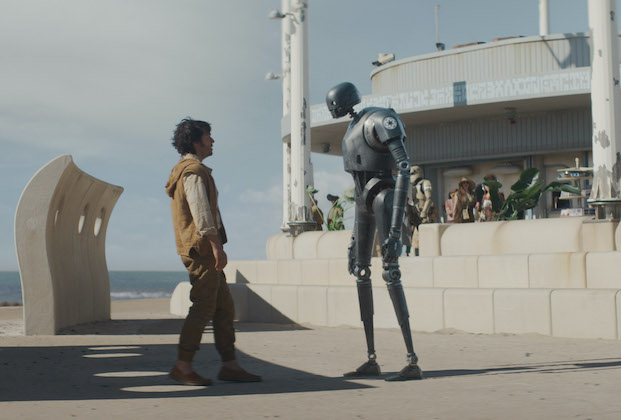 Episode 7 closes out with the reveal that Cassian has retreated to the “beach resort” planet of NIAMOS, which comes with its own decidedly un-Star Wars music score. There, under the alias of KEEF GIRGO, we see that Cass has some (needy!) female companionship, from whom he is hiding any number of things, including his stash of credits. Keef heads out to the resort’s store to buy a few things, but gets stopped by a shore trooper who suspects he is “part of it.” Keef contends that he is just “a tourist,” but the stubborn trooper hails a KX security droid to “hang onto this guy.” Said KX unit alas takes the trooper literally and lifts Keef up against a wall, choking him with its hand. Keef manages to beckon the trooper to correct the mistake, but some time later we see him in court getting rung up for civil disruption, anti-Imperial speech and fleeing the scene. The judge says that while such a ticket would normally call for six months, in these times she sentences him to six years! And if he has a grievance? “Take it up with the Emperor!”

Oh, the irony. Cassian unable to live his life of peace and comfort, because of the paranoia that the robbery he helped facilitate sparked within the Empire.

What did you think of Episode 7, “The Announcement”? And given Cass’ jailing, do you think we are about to get one of those time jumps, since Season 1 needs to span a whole year?