If you happen to take part in some sort of Survivor fantasy game, hopefully you didn’t choose Lindsay Carmine as your pick to win it all!

But I wouldn’t blame you if you had! The registered nurse from Pennsylvania seemed like she had the goods to go far. She was level-headed, a superfan of the game and made plenty of inroads with her tribe, leading this TV journalist to believe we’d at least see her outwit, outlast and outplay her way to the merge. But nothing is guaranteed in the game of Survivor.

In Wednesday’s episode (read a full recap here), an extreme bout of paranoia sent Lindsay on a downward spiral she couldn’t recover from, but, as she told TVLine Friday, “there’s a lot to unpack” and a whole bunch of happenings we didn’t get to see on our TV screens. Here, she reveals the full story.

TVLINE | Let’s start with this: What happened out there?!
LINDSAY CARMINE | I was definitely paranoid out there, not going to lie. That was definitely my downfall and the reason I went home that night. But there’s a lot to unpack. I want to give Karla and the rest of my tribe credit where credit’s due. They didn’t just vote me out because I was paranoid. I was definitely a target. Karla was concerned that I would find out she was playing both sides. She was in an alliance with Ryan and Geo, and while I was aware of that, I honestly thought she was talking with them to get information. I didn’t realize just how tight they were, and that she would’ve considered going over to their side. 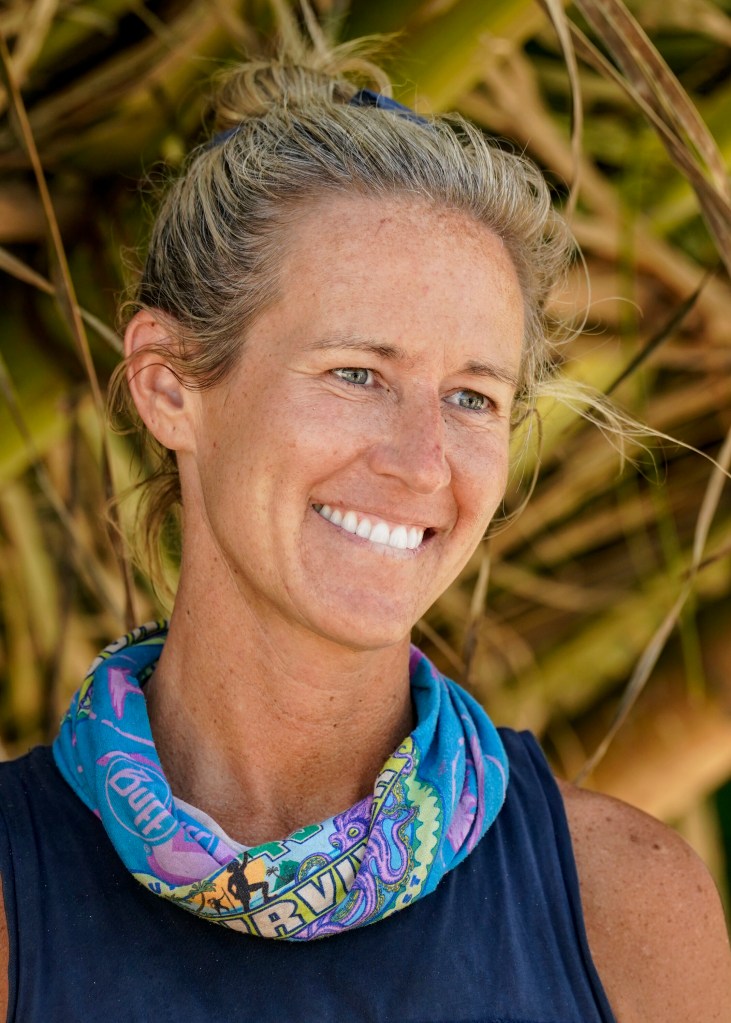 What you don’t see is that Geo had come up to me that day and said, “Hey Lindsay, I just want to give you a heads up. You’re the vote tonight. They’re throwing your name out and it’s because you’re a threat.” And that’s where you see me downward spiral. There were a lot of red flags leading up to Tribal Council, and that’s when I started having trust issues with everyone.

After Geo and I had that conversation, you see Karla, James and I talking in the shelter, and I wasn’t willing to throw Geo under the bus. I was so grateful that he was willing to be honest with me that when I started talking to Karla and James and I said, “Hey, I think I might be the vote,” I was feeding them small amounts of information to see what they would give back to me. If I said to them, “Hey, I think it’s me going home tonight,” and they had said to me, “Oh yeah, we heard that. Ryan and Geo are voting for you, but we’re solid,” then I would’ve felt a little bit better. But they didn’t say that. And I kept pushing them and pushing them to see where it would go. I was also having some reservations because everyone was out there scrambling and having separate conversations.

Also, we all sat down and had one last family meal together, and after everyone else went their own way, Ryan in his Ryan way almost apologized to me for what was going to happen at Tribal Council. Again, there’s my other red flag. “Lindsay, I love you so much. No matter what happens tonight just know you’re my Mama Linds, and I loved spending all of this time with you out on the island,” so that made me paranoid.

TVLINE | Let’s talk about Gio a little more because he kept trying to push a Cassidy plan, which really seemed to be falling on deaf ears. What was his status in the tribe at the time?
Geo was always going to be our vote. For nine days, it was Geo on the line. But I started noticing probably five or six days in, he had a newfound confidence and I couldn’t figure out where that was coming from. Geo and Cassidy, while we all got along, you could tell that there was definitely some butting of heads going on. I always knew that Geo and Ryan were going to go with Cassidy on the vote. As long as it wasn’t me, I didn’t care, as long as I didn’t have to betray my people. I was also happy that they were throwing out Cassidy’s name because if Geo did end up playing an idol, then it would have been Cassidy going home instead of me.

We were worried Geo had an idol because — they don’t show this — but I went through his bag a couple days into the game and found a map, and I thought it was a map to an immunity idol. Unbeknownst to me, Karla already had the immunity idol so she wasn’t as concerned as I was. So, I was trying to figure out what we were going to do if Geo ended up playing an immunity idol that night. But he was definitely on the outs, but Karla was playing both sides and I think she really deserves credit for that because they were giving her lots of information.

TVLINE | Tell me a little bit about this negotiation with Cody. Karla said in the episode that she thought Cody played Coco. What did you think?
I didn’t really care, as long as Cody didn’t take the machete. Our machete was our lifeline out there, and while the fishing gear was very valuable, we weren’t catching a ton of fish. Our beach had moss-covered rocks and then dipped down very low. In order for us to go fishing, you had to swim pretty far down, and a lot of us had a hard time holding our breath because by the time you got down to the bottom, you needed to come right back up for air. So while Ryan was doing an amazing job of catching fish, they were small. And we were eating so many other things out there that it wasn’t a big deal to us. 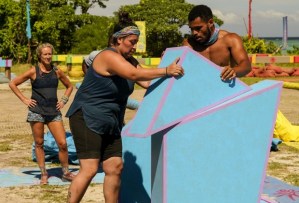 I also wanted Cody to have some food. They weren’t eating anything. And while I know that it’s important to keep the other tribes weak, I thought, “We’re getting this close to the merge, why don’t we throw them a lifeline.” He’s going to remember that when we all come together. Baka and Vesi were working well together, and so, if there was a way for us to be able to get Cody to trust us and want to work with us, I thought that was a good starting point.

TVLINE | Speaking of, we saw Vesi help Baka finish the second immunity challenge puzzle. Tell me your thoughts!
I didn’t realize that until after the challenge was over. I was so laser-focused on making sure that we got that puzzle right that everything else was just white noise to me. We found out afterwards, Jeff told us, and I was like, rage-angry. But as a fan and somebody who knows this game inside and out, anything goes. If somebody was willing to help us out, I would have loved that.

What you guys didn’t see was that in the challenge before, when Noelle and James were picked to go on the journey, Dwight had asked Baka if they would pick Noelle and they did. And so Dwight and Noelle were kind of saying, “Hey, you guys did us a solid last challenge. We’re gonna do you a solid.” It was their way of thanking Baka.

TVLINE | What else didn’t we see on TV? Any drama or beef that ended up on the cutting room floor?
We didn’t have a lot of drama, beef or struggles! Like I said, Cassidy and Ryan weren’t always getting along, but we were a very kumbaya tribe. Before Tribal Council, we’d all stand in a circle and hold hands and do breathing exercises together. Ryan would lead us in stretching exercises, we played Bocce on the beach and we had an amazing time. James and I had a ton of conversations about both working in healthcare in Philadelphia and the struggles that come with that. I’m really disappointed that y’all didn’t get to see our tribe dynamic as much because I feel like my vote-out would have would have been bigger in the sense that we were really strong and it was hard to vote anyone out.

TVLINE | You had been trying to get on this show for years. Any regrets from your time out there?
I’ve been in the casting process for almost seven years. I was almost on David vs. Goliath, and then I got chosen to play on Season 42. About 12 hours before I was supposed to fly out, I got COVID and it was taken away from me. So, I was eager and ready to go out and play this game, and just so grateful that I ended up getting a second chance. I was so worried after 42, that that was it for me. For me to be able to come back and have a second chance after all of that, I wasn’t willing to take any moment out there for granted.