It wasn’t the first time a player’s own neuroses sunk his or her game, and it surely won’t be the last.

On Wednesday’s episode of Survivor, we could see that vote coming a mile away. It was a train wreck we couldn’t turn away from, and at the end of the hour, Lindsay Carmine might as well have written her own name down at Tribal Council. It was a master class in “How to Turn Your Alliance Against You,” taught to players and viewers alike in 15 minutes or less.

Yes, the Coco tribe suffered its first immunity challenge defeat (after Vesi helped Baka out in a major way — more on that below), but had she played it differently, Lindsay didn’t have to be the one to get her torch snuffed tonight. Let’s go ahead and dive deep into demise.

When the Vesi tribe gets back from Tribal, Cody says voting out his alliance-mate Nneka is akin to the pizza guy never showing up and his roommate drinking all the beer. Comparing a $1 million decision to a sixer of Kona beer? What can we say? Cody’s gonna Cody.

Over at Baka, Gabler is busy putting palm fronds on his sleeping tribemates, which is a weird flex, if you ask me. Island blankets aside, Gabler is rubbing his tribe wrong in myriad ways. While he acknowledges that both he and Elie are strong personalities, he says if they let Elie get too far, they’ll all regret it. It’s a solid and very possible point! 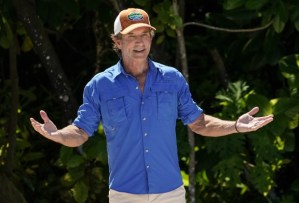 REWARD | One player from each tribe will use sandbags to knock blocks off a podium. Then after using two blocks to walk to the finish, the three remaining members must each land one sandbag on some hanging discs. They’re playing for some grub: 10 fresh fish delivered to camp. Plus, the winning tribe can steal one item from one of the two losers.

Cody does an impressive job giving Vesi a big early lead, and the rest of his tribe seals the deal. Since they don’t currently have a flint, they trade the fish for a basket of fruit.

STEAL | Cody wants to snag Coco’s machete to really hit ’em where it hurts. Unfortunately, the rest of his tribe wants to tread lightly and not piss another team off too much. Vesi sends Cody over to Coco, and he up and tells them that his original goal was to steal their machete, which is just a ploy to kickstart a negotiation. They offer Cody some food and limes if he leaves their machete behind and takes the fishing gear instead. They fall right into his trap, and he takes the deal.

IMMUNITY IS BACK UP FOR GRABS | Tribes must find a ring of keys in a tower of sandbags, drag large puzzle pieces under a cargo net, then solve two puzzles, first forming the pieces into a square and later, a triangle.

Vesi is the first team to finish the square puzzle, leaving the other two tribes in the dust. Coco struggles hard with the square, but when they finally land it, Cassidy and Geo do a little dance from the sit-out bench. (Which, yes, I rewound twice. Tweet me that GIF ASAP!) Vesi scores immunity first, and when they do, they help Baka complete the triangle puzzle! Noelle, in particular, is NOT shy about lending a helping hand, either. (Is this a Survivor first? I can’t recall this ever happening, but I could be wrong!) Coco has never been to Tribal Council and clearly has a numbers advantage, so it’s mutually beneficial for Vesi and Baka to work together. Smart, but will it come back to bite them down the road? 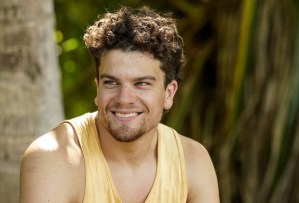 STRATEGY | Geo makes it abundantly clear that he wants to target Cassidy, but the women plus James want to get the power hungry Geo out… that is, until Lindsay starts straight up bugging. Despite the fact that her alliance agrees to vote Geo, her paranoia runs amok (amok, amok, amok…), making Karla extremely uncomfortable. All of a sudden, Karla wants to flip the script on Lindsay! (And you know what? I don’t blame her one bit.) James tries to keep the original plan in place, but will he be able to quell Karla’s unease or did Lindsay just sink her own game for nothing?

TRIBAL COUNCIL | Lindsay continues acting cray, telling Jeff a little too pointedly that some people purposely didn’t talk to her. She does cop to getting too paranoid and admits she did too much fact checking throughout the day.

James says he used a calm demeanor all day in order to make everyone feel comfortable. He wants to prove to them that he’s going to do exactly what he promised. And in this instance, he, Karla, Cassidy and Ryan vote Lindsay right out of this game. (Read our exit interview with Lindsay here.)

Surprised at the outcome or not in the slightest? Did Lindsay deserve the boot? Tell us in a comment below.