Alanis Wheeler showed her true colors — turns out, they’re all teal! — in this week’s The Handmaid’s Tale.

The episode found the Gilead-sympathizing Canadian lashing out at her houseguest, Serena, when she mentioned that she might not want to remarry anytime in the near future. This was seen as anathema by the young ideologue, who’d previously put the pregnant Mrs. Waterford on a very high pedestal. As Alanis’ anger increased, she eventually ordered Serena to go to her room, cementing something Serena must’ve feared for a while: She’s essentially the Wheelers’ handmaid. (Read a full recap.)

TVLine got on the phone with Genevieve Angelson — whom you may know from New Amsterdam, Good Girls Revolt, The Afterparty and/or This Is Us — to talk about her feisty, fanatical alter ego.

TVLINE | When Serena arrives at the Wheelers’ home, Alanis is a little starstruck. She’s very happy to have her there. Then see that shine fall off of that interaction in bits and pieces. When do you think that Alanis makes up her mind that Serena Joy is not the person she thought she was?
The first time that I, in the playing of it, chose to display that crack is specifically in the scene — it happens in an instant, like, a blink-and-you-can-miss-it instant — when I consider, as Alanis, whether or not I want to be on the call with Gilead when [Serena] steps into my husband’s office. And I say, “No, wives shouldn’t concern themselves with such things.” I’m sort of putting together in that moment that I would never do that, and I look at her doing it, and I think, this doesn’t feel right.

And so, subsequently, when I find out in the scene where we’re in the conservatory and we’re cutting flowers, and [I realize] she’s basically not practicing what she preaches, [and that Serena] is a human being in a way that is, like, disturbing to me. [Laughs] It’s funny, it’s so interesting.

You know, people have said — obviously I’ve been reading the comments — and people have said things like, “[Alanis is] so scary, she’s so creepy.” And I’m grateful that it’s landing in that way. But I think there’s also a part of me that’s like, “You guys, that’s just actually my smile when I’m excited!” [Laughs] When I love something, that’s actually what it looks like. I would never choose to play creepy, or icky. That’s just not how I work. I just played that I love someone so much. There’s something about being passionate that actually, in the wrong circumstances, is terrifying. 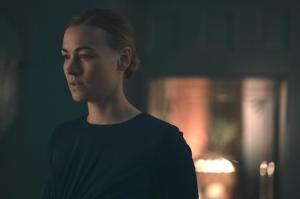 TVLINE | I’ve made mention of it before, but I’m so torn about what’s happening to Serena. Obviously I don’t want any woman to lose her personhood little by little, but I do love the idea of Serena getting what she deserves. And the Wheelers are sure starting to feel like Serena’s commander and his wife, right?
I think you’re describing a couple of things. I think it raises the question of if the enemy of your enemy is your friend, and I think what this show does really deftly is try to avoid characterizing any person as pure enemy. And I think Serena Joy is the best example of that, in that, yes, of course she is, like, the co-creator of Gilead in a way that’s even more baffling because she’s a woman.

TVLINE | Right.
So, in that way, she’s this super-villain. But of course, over the course of four-an-a-half seasons, Yvonne [Strahovski] has played her with such moments of contrast and humanity that… we find ourselves caring about her. And so, I think there is something that, when injustice, or a crossing of boundaries, or a violation of someone’s rights happens to anyone, it doesn’t really feel good.

But on the other hand, I think it speaks to a really honest part of Alanis, which is that we’re doing this for a reason. We are trying to recreate Gilead-esque circumstances for a reason, and that’s because there is a dire international fertility crisis, not because it’s just Wednesday and we feel like it. This is a tough f–king situation, sorry… And [Gilead is] the only republic that has been able to solve it. So, if that’s true, like, fall on your sword, Serena. You are not bigger than this, and if you’re fertile, then we need you the same way that you needed all those other women.

It’s actually quite egalitarian, is how I thought about playing her, which is not like “I’m Genevieve playing Alanis, a villain who does this power-play on Serena Joy, former villain.” It’s, “We have a problem. And I’m being the big girl who is making the hard choices.”