Wednesday’s Conners featured the off-screen death of an extended family member and provided an update on the M.I.A. DJ.

During the cold open, Louise and Neville got word that their estranged brother Aaron died of a heart attack, leaving behind a 17-year-old son named Caleb (played by Shameless‘ Ethan Cutkosky aka Carl Gallagher). It was now up to the remaining Goldufski siblings (and their respective spouses, Dan and Jackie) to determine who would board their jaded nephew, who’d had a rough go of things with an alcoholic dad. 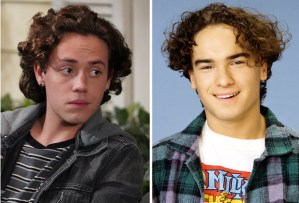 Jackie, a fellow graduate of the Bad Parent Club, felt she could provide Caleb with a stable home environment. And for a second, it felt like the show was about to give Roseanne’s eccentric sister the son she never had — ‘ya know, since Andy no longer exists. The storyline also gave off serious David Healy vibes, what with Caleb being a troubled teen in need of a place to stay. It also didn’t help that he looked so darn much like Darlene’s ex-husband (see photo). But by the end of the episode, Caleb had enlisted in the Marines, and his uncle Neville couldn’t have been any happier about the decision.

We also received clarification on DJ’s whereabouts. Earlier in the episode, Louise mentioned that Mary was splitting her time between the Conner household and Geena’s mother’s home until DJ returned from visiting his wife, who is currently stationed in Germany. It was the first mention of DJ since legacy cast member Michael Fishman exited the long-running comedy in August.

What did you think of The Conners‘ newest addition? Would you like to see more of Caleb, or was one episode more than enough? Hit the comments with your reactions to the episode.