Make no mistake: Chicago P.D.‘s Dante Torres is no pushover.

When the rookie cop was told to leave his own neighborhood, he took matters into his own hands. Removing his badge and gun, he laid into the man who threatened his family, effectively telling everyone that he wasn’t going anywhere. 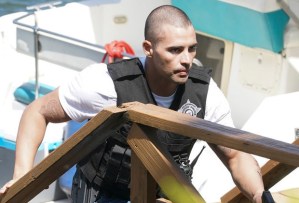 “In that moment, he knew that that was the only way, and he didn’t think of potential repercussions,” Benjamin Levy Aguilar, who plays Torres, tells TVLine. “He thought, ‘OK, there’s someone here threatening my family… And if you don’t want to take it on the right path, I will show you fear and pain. I will go all in so that you respect me, and don’t ever think of hurting my family.’ It was just like a very animalistic, raw, truthful part of him that just came out.”

And while it showed that he’ll “do what is necessary to protect himself and his family,” Aguilar also notes that there’s “definitely going to be more paranoia.” When it comes to Torres, he is “all heart, and he really wants to just do the right thing, but he also has a side that shouldn’t be tested.”

Torres’ volatile response to the threat against his loved ones draws parallels to Voight, who is also known for handling things his own way. (Remember the time the sergeant shot his son’s killer?) Aguilar also recognizes the similarities between both characters, pointing out that Voight and Torres are “cut from the same cloth.”

“They’re very similar,” he adds. “I think that’s why they respect each other, because Voight had to sign off for Torres to be a part of this. It wasn’t just Halstead. There are so many similarities that I can’t wait to explore that relationship when we get a chance… There’s a lot to unpack there.”