After his son was shot and died in Chicago P.D.‘s Season 3 finale Wednesday, Voight went on a rampage, shooting Justin’s killer — and will continue to have “no fuse” next season, executive producer Matt Olmstead tells TVLine below. (The detective’s actions also cost him a promotion and possibly his current position as Intelligence’s head, a gig which may go to Antonio if Voight ends up on the wrong side of the law.)

Meanwhile, Burgess and Roman came to the mutual agreement that she should stay and be a cop rather than leave for San Diego with him. (He, however, did depart the Windy City — and the show — putting an end to their brief relationship.) On the bright side, Lindsay and Halstead’s relationship is still going swimmingly, with the couple headed for cohabitation in Season 4, Olmstead reveals.

TVLINE | Does the death of his son push Voight over the edge back into his old self next season?
Yes, we’re going to see a different side of him, because he goes from short fuse to no fuse. It’s not going to go back to what we call the other side of street, where he’s taking payouts from drug dealers, even though in his mind, it was a la Robin Hood, using that money to help free up other kids. It’s not like he’s in self-destruct mode. [His mindset is], “My right and wrongs are that much more cut-and-dry for me, and my desire to right wrongs is that much more clear to me.” Is the net of doing that somewhat more direct, possibly brutal? That’s what he has to keep an eye on [and] what people in his unit have to keep an eye on. So it’s a different side of Voight, because ain’t no way he can lose a son and not have that affect him. 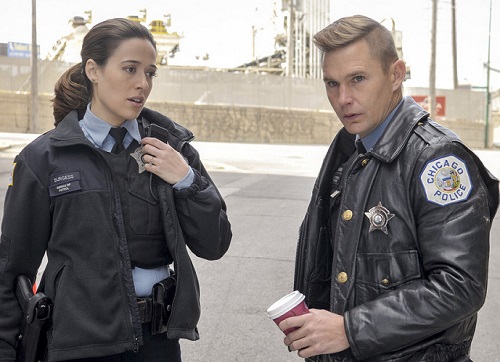 TVLINE | What does the future hold for Burgess after Roman’s departure?
He makes the appeal to Burgess to come with him. She thinks about it, but she is a cop first, especially after what she went through, [being] shot at [and] dragged through the mud and raked through the coals, so to speak, [during] the trial. A lot of people would’ve quit [or] become disillusioned, bitter cops, and she’s not like that. She wants to remember what the good parts of the job were and wants to try to recommit herself to that. So he packs it up and leaves. He’s gone, and she’s looking for a new partner next season.

TVLINE | Is it safe to say that Roman’s feelings for Burgess were stronger than hers were for him?
Yes, because she was still reeling from the break-up with Ruzek. It was nice to distract herself, but she wasn’t thinking straight. She couldn’t make an objective assessment of that relationship because she was still dealing with the Ruzek break-up, whereas Roman was completely clearheaded and completely convinced that this was the way to go.

TVLINE | Does Roman leaving open the door for a potential Burgess and Ruzek reunion?
It does, if you want to go there. [In] the beginning of next season, she’s going through a little bit of a celibate period… [Both of her relationships with Ruzek and Roman] blew up in her face. She’s like, “I’m committing myself to [being a] cop,” and there’s a little bit of a run of, hopefully, comedy where she’s trying to get to a certain date of celibacy. Whether or not she gets there, we’ll find out. 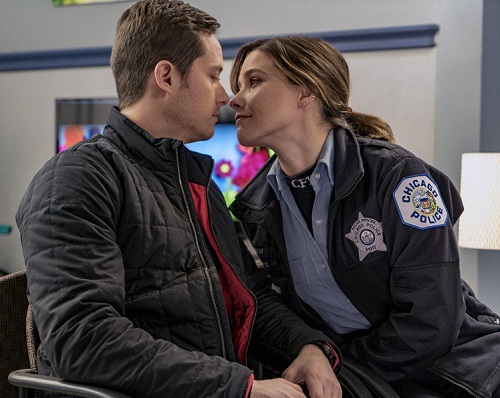 TVLINE | What’s coming up for Lindsay and Halstead in Season 4?
We want to have them move in together and just play the baby steps of what it’s like to live with someone [for] two very independent people who have always done their own thing. We want to start turning some cards over when it comes to that, play the wish fulfillment of it all, because the audience likes them. We like them. We want to see them together more. [During] some heavier aspects of the show, specifically what Voight did and what’s going to happen with Voight, we’re going to play a little bit of the sun breaking through the clouds here, and that’s going to be those two kicking the tires and moving in together.

Chicago P.D. fans, what did you think of the season ender? Grade it via the poll below, then hit the comments to back up your pick!