The full trailer for Wednesday is finally here, and it features Fred Armisen as… Uncle Fester!

The sneak peek, which was released Saturday during the show’s panel at New York Comic Con, also offers up a first look at Addams Family franchise vet Christina Ricci as Marilyn Thornhill, an original character created for the series.

Press PLAY on the above video for a glimpse at both Uncle Fester and Ms. Thornhill.

Arriving Wednesday, Nov. 23 on Netflix, the eight-episode first season follows the titular character (played by Jenna Ortega), who is enrolled at the peculiar Nevermore Academy. The story centers on Wednesday’s attempts to “master her emerging psychic ability, thwart a monstrous killing spree that has terrorized the local town, and solve the supernatural mystery that embroiled her parents 25 years ago — all while navigating her new and very tangled relationships of the strange and diverse student body,” per the official synopsis. 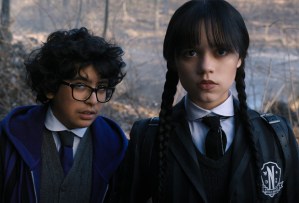 Thoughts on Fred Armisen as Uncle Fester in Netflix’s Wednesday? Drop a comment below.