Full of “Aww!”-some throwbacks to the past and tantalizing harbingers of the future, Thursday’s ultra-zippy Grey’s Anatomy got the long-running ABC drama’s Season 19 off to a pretty fantastic start. We got, if not full, at least partial resolutions to two cliffhangers (Meredith and Nick’s relationship status and Owen and Teddy’s legal woes). We were introduced to the five new surgical residents who are pumping fresh blood into Grey Sloan. (More on them here.) And we had dropped on our heads two surprises — one of them delightfully Derek-based. And if you keep reading, we’ll go over most everything that happened in the premiere (which, by the way, was written by showrunner Krista Vernoff and directed by executive producer Debbie Allen). 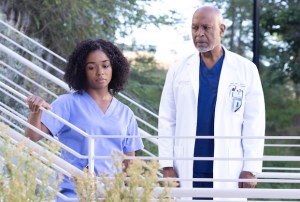 ‘I’LL BE THE VAGINA’ | Six months after the events of the Season 18 finale (recapped here), “Everything Has Changed” found Grey Sloan restarting its residency program with a group of newbs that Bailey — still very much on leave, thank you very much — wrote off as having been scraped from “the bottom of the barrel.” One of them, Jules Millin (Adelaide Kane), had just had a one-night stand with an unwitting Link, in whose face she laughed when he nervously suggested that they report their nonexistent relationship to HR. (Shades of Meredith and Derek’s origins, no?) Another of the freshmen, Mika Yasuda (Midori Francis), was quickly taught that a dark sense of humor still doesn’t make “organpalooza” an appropriate term for a tornado-based bus accident that left a whole lotta people about to donate the hearts and livers and so on that they no longer needed. Resident No. 3 Simone Griffith (Alexis Floyd) showed up late on day one owing to a panic attack brought on by the fact that she’d be working in the same hospital where her mother had died giving birth to her. The fourth of our fresh faces, Benson Kwan (Harry Shum Jr.) shared that everyone called him Blue “as in the ribbon, ‘cause I always win.” (Was I the only one who saw a spark between him and Simone?) Last but not least, we met Lucas Adams (Niko Terho), who has Nico-worthy abs, an aptitude for [bleeping] up… and was Derek’s favorite nephew. That wasn’t why Meredith had hired him, though, she told Amelia. Lucas didn’t remind Grey of her late husband, he reminded her of Amelia! 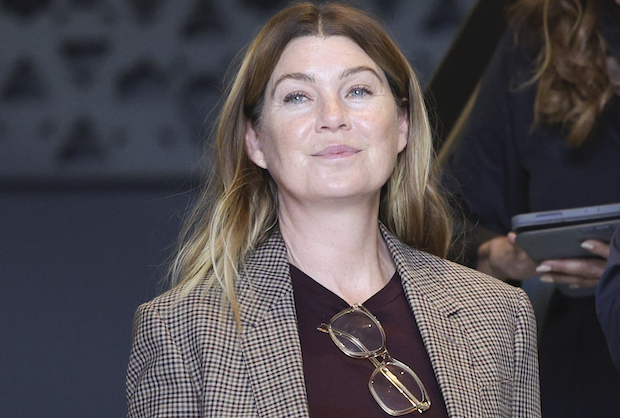 With the residency program getting back up and running, Levi seized the opportunity to ditch his loathed OB residency with Jo and plead with Richard to make him chief resident. Not only was Schmitt what Webber needed — a senior resident, not a first-year — but “if I’m ever tempted to go soft,” the doctor formerly known as Glasses promised, “I will picture a return to OB, and I will get stronger like a vagina, which I’ve been forced to learn can stretch to 200 times its natural size and lift a 30-lb. weight just by flexing.” All Levi had to do was get chief Grey’s OK, and she was so all for it that she suggested it herself. In other staffing news, while Nick was at Grey Sloan to pick up an organ for transplant, Meredith, face to face with her (ex?) boyfriend for the first time in six months, asked him to become the new residency director. Not only had his past inspired her to hire what other hospitals might have considered “rejects,” but he wouldn’t have to travel so much. Meaning that, although she’d hurt him by not doing more than call out his name after telling him to go back to Minnesota, she wanted to make their relationship work. In still more staffing news, Teddy and Owen paid Mer a visit, during which they revealed that they’d been cleared to return to work. Well, Altman had. After a whole lot of attorney fees to get Hunt out of his legal quagmire, he was only cleared to return to work under supervision for the next six months. (His medical license had been suspended.) 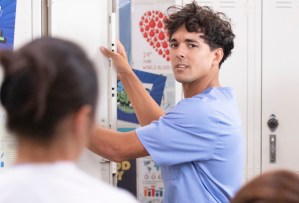 ‘I WANT TO BE A TREE’ | Later in the episode, Jo shared with Link that she was switching the OB department’s scrubs to black since “the female body has become a war zone in this country, and pink is a peacetime color.” Given the plenitude of organs suddenly available for harvesting, Maggie was able to tell a patient named Howard that he’d be getting a new heart. When it proved to be unviable, the task of breaking the news to Howard and his husband went to… Jules, the Pierce superfan, who’d obsessed over an article she’d written and blurted out that “it wasn’t a great picture” that had accompanied it. A compliment… probably? Meanwhile, Lucas won the First Big Screwup Award by telling the wrong mother named Jane that her son was brain-dead. This temporarily put in jeopardy all of the organs that Mer had hoped to transplant into a patient named Sara, who wanted to be planted in a whole other way if she died. Eventually, Jane was told again that her son was brain-dead and inspired to donate his organs to Sara by Blue, who lied that he always thought of the people that his late brother’s organs had saved. (He didn’t even have a brother, he later admitted!) Despite Lucas’ almost catastrophic gaffe, Nick invited him to scrub in on Sara’s surgery. “End your day better than it started,” Marsh said. And that, Lucas did, even quoting Uncle Derek in the O.R. “It’s a beautiful day to save lives.”

So, what did you think of the new residents? Got an early favorite? Will Link and Jules — aka Prince Charming and Snow White — hook up again? Sound off in the comments, then grade the episode in the poll below.