Based on this week’s Big Sky, I’m officially more scared of Sunny Barnes than of her recluse-and-possibly-murderous son in the woods.

What kind of woman croons so soulfully, and with such beautiful tone!, while refusing to help a dying man get help? What kind of monster can turn her smile from radiant to menacing and back in the space of a breath? Forget bears: Sunny is the real menace out there in the dark.

But she’s got some competition in the hour, titled “The Woods Are Lovely, Dark and Deep.” What is going on with Avery, Paige and Luke — and are all three of them tied in some nefarious way?

A MOTHER’S WORK IS NEVER DONE | We quickly learn that Creepy Guy In the Woods’ name is Walt, and that he’s been naughty. “You have your place. You stay there, everything’s peachy keen,” Sunny tells him. “You know our deal.” He brings her to the hiker, who is bloody and gasping as he begs her to take him to the hospital. “I’ve got a child of my own to protect. I hope you understand,” she says, singing as he takes his final breaths. 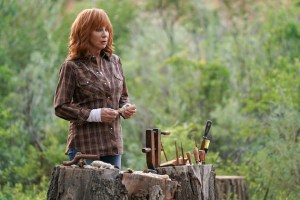 Over the course of the episode, it sure seems like neither Sunny’s husband, Buck, nor her son, Cormac, know about Walt or what’s going on in his section of the woods. And pretty soon, there are other events to distract. Some witnesses who chatted with the missing hiker point Cassie toward a decommissioned trail. So she and Beau hoof it up there and find the hiker’s water bottle, then check in with Sunny — which is basically just a chance for Beau to look in on his daughter, Emily. Things are a little stilted when Avery finds his wife’s ex in camp, but then Beau gives his kid a too-long hug goodbye and he and Cassie take off.

Elsewhere in camp, Paige and Luke, the young couple on Sunny’s excursion, are back to bickering; this time the topic is his dislike for her flirting with Sunny’s son, Cormac. But — wait a minute! — there’s more going on here than it appears. “We both know we’re hanging out here until things blow over and we can go back for the money,” she says while they’re lost and away from camp. They argue more about how he should be in jail and how his mom can’t help him out of this mess, and when he lunges for her neck, she warns him never to touch her like that again. She stalks off, and he picks up a large rock and follows. But look, they’re right near that tree with the red heart carved into it, which I believe puts them squarely in Walt’s territory?

And while they’re gone from camp, how come Avery rifles through their tent and seems very interested in the gun and diary he finds there? Emily catches her stepfather, who claims that he accidentally walked into the wrong tent, and it’s not clear that she believes the flimsy lie, but she doesn’t say anything.

The next morning, Sunny tells the group that they couldn’t find Paige and Luke overnight. (Side note: Uh, why isn’t she more worried about that? It seems like very poor form for someone whose whole job is keeping people safe and happy in the wilderness, right?) So Emily suggests that the rest of the guests hit the trails to aid in the search, and Sunny covers her irritation well enough to make it look like she thinks that’s a grand idea. Then she scurries off to whisper-shout “Walter!” at some bushes in hopes of luring out her disturbing son, but she can’t find him. 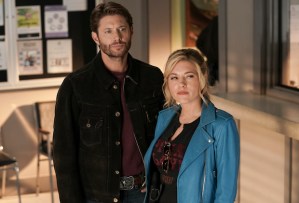 SQUATTER’S RIGHTS | Jenny is mid-rant about how Tanya is a criminal and she’s going to lock her up when the woman in question arrives at the sheriff’s department, looking for help with a squatter on one of her properties. When Hoyt investigates, she finds that the guy knows his squatter’s rights… but also that he’s got a bag full of money, a gun and several IDs under different names. So she throws him — and Donno, who was assaulting the squatter in an attempt to get him to leave — into a holding cell.

But things take a turn when a guy who seems like just another drunk getting thrown into the cell actually has a syringe up his sleeve. Only Donno’s freakish distraction and Jenny’s quick moves stop the man from poisoning the squatter. “Who are you,” Jenny asks him, “and who wants you dead?”

She eventually finds out that the squatter’s real name is Paul, and he’s a whistleblower for a jet company who was planning on testifying about faulty plane parts but got cold feet at the last minute. Jenny digs a little more and finds out that an executive assistant from the jet company went missing under mysterious circumstances. So she and Beau try to convince a freaked-out Paul to go into Witness Protection and go through with his testimony.

He does. A U.S. Marshal named Deputy Weaver shows up to escort him to the airport and a protection program, and even though Beau and Jenny confirm that she is who she says she is, they still have Deputy Poppernak follow her at a distance to make sure nothing untoward happens… and then it does. The marshal blows past the turn for the airport, making Jenny and Beau think that the crooked jet company got to her. So they return to the squatter’s house to search for an “insurance policy” he mentioned… and they find the marshal holding a gun to Paul’s head.

Jenny and Poppernak quickly disarm and knock out the marshal, then Beau finda Paul’s insurance policy in a locked room: It’s Camille, the missing assistant, who’ll corroborate his story and help take down the jet company together. 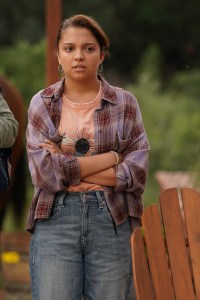 WELCOME HOME | When things settle, Jenny and Beau visit Cassie at her new house, bringing bread (so she’ll never be hungry) and salt (to protect against demons, which has gotta be a vague Supernatural allusion, no?) as well as tequila for funsies. They drink some of the latter while they all update each other on their days. And when Cassie gets to the “victim had her heart cut out years ago in those woods and it kinda reminds me of what’s happening now” part of her story, Beau decides it’s high time to text his daughter.

At that exact moment, she’s walking a trail alone, thanks to Avery heading back to camp to take a poop. And right as Beau’s text doesn’t go through due to lack of service, she’s following a trail of blood that leads to an even bloodier Luke frantically washing in the river. She pulls out her phone and starts snapping photos, and when Luke hears  the shutter noise, he turns around and looks very unhappy to see her there.