We may be at least six months out from the Spring 2023 release of Disney+’s hotly anticipated Secret Invasion series, but MCU vet Cobie Smulders is as excited for its debut it as the fans themselves are.

“It looks so good,” she raved, “and it’s a very different tone than I’ve seen [in the MCU]. I mean, having Sam [Jackson] in anything is just a thrill to watch, but I think it really sets his character up in a really interesting way that I’ve always wanted to see.”

Secret Invasion, which will help kick off the MCU’s Phase 5, stars Samuel L. Jackson as Nick Fury and Captain Marvel‘s Ben Mendelsohn as the shapeshifting Skrull named Talos, while Smulders will reprise her MCU role as former S.H.I.E.L.D. deputy director Maria Hill. Announced in December 2020 and based on the 2008 Marvel Comics crossover of the same name, the Disney+ series follows a sect of Skrulls who have infiltrated all aspects of life on Earth.

Other confirmed cast members include Kingsley Ben-Adir (The OA, The Comey Rule) in a reportedly villainous role, Martin Freeman as the MCU’s Everett Ross, Olivia Colman (The Crown) and Emilia Clarke (Game of Thrones). 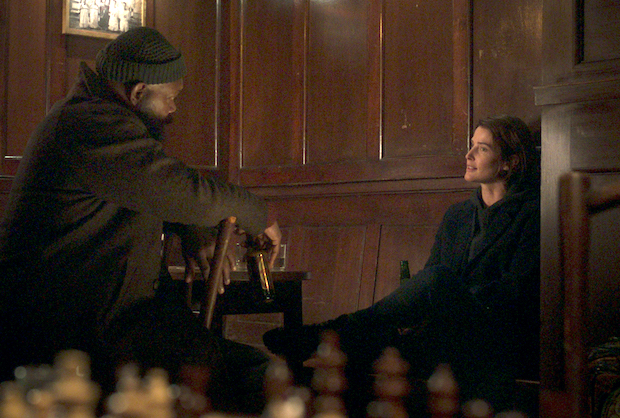 Assaying how the small-screen series serves Maria Hill herself, Smulders would not say it necessarily gives us more of the character than we’ve seen before in The Avengers, Endgame or Spider-Man: No Way Home. But “it’s the most depth I’ve been able to show of Maria Hill,” she asserted. “That’s the beauty of these series that Marvel is doing, you’re able to really get backstory of these characters. What are the conversations that happen when they’re just sitting around drinking coffee? It’s not like, ‘We’ve gotta get the bad guys! We’ve gotta get the thing! We’ve gotta save the world again!’ It’s like, ‘Let’s just have a chat, let’s go for a walk.’ We get to see those kinds of moments and be a bit more intimate with the characters.”

As for the larger role that Secret Invasion plays in setting in motion the MCU’s Phase 5 and then Phase 6 (the latter of which closes out in November 2025 with the film Avengers: Secret Wars), Smulders was mum on specifics, but said, “They’re geniuses at Marvel, so they’re going to be setting up something that I can’t talk about or have the ability to understand.”

Smulders can next be seen playing mom to Tegan and Sara in High School, Freevee’s eight-episode drama series based off of the indie pop duo’s bestselling memoir and premiering Friday, Oct. 14.

Want scoop on Secret Invasion, or for any other Marvel series? Email InsideLine@tvline.com and your question may be answered via Matt’s Inside Line.