[Whispers] The Handmaid’s Tale isn’t moving Serena and Commander Lawrence into some kind of unholy union… is it? [Whispers even more softly] And I’m not kinda into that idea… am I?

The idea is planted during this week’s episode, which finds the scarved architect of Gilead at one point palming the Widow Waterford’s belly and laughing with what seems like actual delight. While that particular exchange isn’t the most important in an hour which also includes June and Serena’s first post-dead-Fred faceoff AND a June/Nick phone call, it certainly made me stop and think about what kind of Mrs. Lawrence Serena might make.

Read on for the highlights of “Border.’ 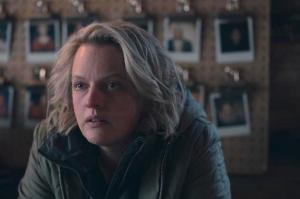 ‘YOU WERE MAYDAY, TOO’ | At home, June and Luke are still reeling from seeing Hannah during Fred’s funeral procession. They note how she was wearing purple, but they’re not sure of the significance. “Not pink, though,” says Moira, who watched it on TV. “She’s not a little girl anymore.” June wants to talk to Nick, but without Tuello around, that’s looking improbably. Still, Moira knows of an unofficial group at the border that’s been having luck getting messages to people inside Gilead. Though she doesn’t think it’s a good idea for June to hang around with the group, which is “basically suicidal,” she asks for a meeting for her and June. “No men allowed,” she tells Luke.

And just like that, Moira and June meet a woman named Lily outside a BBQ joint. She’s one of the women June traded for Fred. “Sorry I didn’t do it sooner,” June says, a little uncomfortable under the woman’s awe. They travel to Lily’s compound at the edge of No Man’s Land, which is run entirely by women and is heavily guarded. That’s when June realizes Lily’s group is Mayday, and now it’s her turn to be awed. “We thought we made it up,” June says of the resistance movement. “We thought it wasn’t real. We thought we made it up because we had to.” Lily looks at her. “Well, then, you were Mayday, too,” she says.

It takes some time for the call to go through, but when it does, June asks Nick about he significance of the purple Hannah was wearing. “She’s ready,” he says quietly. “New school. High commanders’ daughters. Training for future wives.” She is 12.

June frantically asks him to transfer to Hannah’s district to watch out for her, but he gently tells her that he has a new wife (“you know how things are here”), and he asks about Nichole. Then he warns her that Commander MacKenzie — Hannah’s Gilead “dad” — is powerful and that they won’t be able to talk for a while. “Hey Nick, try and be happy, OK?” she says, flashing back to their last kiss. It’s bittersweet for both of them, and he hangs up. 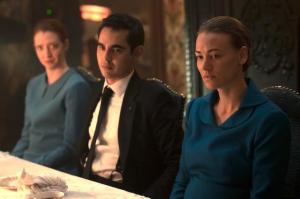 SERENA HATCHES A PLAN… | What we know and June doesn’t: MacKenzie is suspicious of Nick, whom he saw talking with Mark Tuello while Serena was in Gilead. We also learn that Rose, Nick’s seemingly June-sympathetic wife, is the daughter of a well-connected high commander — is that why Nick married her in the first place?

Let’s back up a moment. Serena is still in Gilead, where the pageantry she pulled off for Fred’s funeral is being celebrated. Mark Tuello is still with her, though he’s made to wait outside while she, Nick, Rose and the MacKenzies dine at Commander Lawrence’s house. “We have a strict no-spies policy,” Joseph tells the American upon arrival.

The dinner conversation includes discussion of how the MacKenzies also hate June (mainly because they’re raising Hannah, whom they call “Agnes,” and June has long been a thorn in their sides), how they know she was involved in Fred’s death and how they think that Joseph needs to remarry soon because a single man has no place in Gilead leadership.

Commander Lawrence makes it clear that he has no plans to take another wife. Still, later, Serena suggests that he rethink his position. “Marrying for power, Serena, it doesn’t always work out well,” he says. “Depends on the marriage,” she counters. (Verbatim from my notes: WAIT WHAT?) She puts his hand on her stomach to feel the kid kick, and it affects him more than most things we’ve seen. “We’re gonna protect you, Serena. You and your child,” he says softly. Then the spawn moves, and Joseph grins, saying, “Praise be.”

Do I want Serena and Lawrence to marry? Nope. Do I want to see Yvonne Strahovski and Bradley Whitford routinely have scenes of domestic intimacy together? Absolutely. So I. AM. TORN.

Back at her room that night, Tuello tells Serena that staying in Gilead will be a mistake. “You must realize it’s not safe for women in this place, especially unmarried women,” he says. “I don’t believe that will be my situation for much longer,” she coos. Soon after, a messenger arrives to say she’s being called to the commanders’ council the following day. 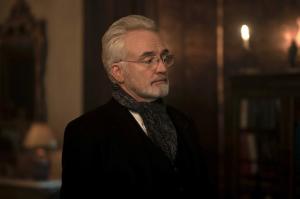 … AND THE COMMANDERS LAUGH |Whatever she thinks is going to happen at that council meeting… doesn’t. After a weird exchange with Commander Lawrence, she’s brought before Gilead’s leaders to find out that she’s going to be a global ambassador for Gilead, “unofficially, of course.” They’re sending her back to Toronto “to best represent our sacred republic,” and she is mightily pissed to hear it. But she rebounds quickly enough, demanding a staff, a substantial budget “and protection from those who would hurt me and my baby.” They agree. She curtly thanks them. She leaves. Tuello, who’s been advised to hold the plane, flies her back.

Before they leave the compound, June and Moira get word that the Americans are escorting Serena back to Canada. And indeed, when Serena is in the car from the airport, she sees some “servants of God” holding candles in support for her. But then another car pulls into their path, Serena’s car is forced to stop, and June hops out of the blocking car to slam the window near Serena’s face. “Never touch my daughter again!” she repeatedly yells as Serena freaks out and commands her driver to get them out of there. 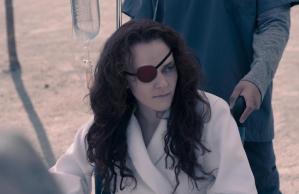 JANINE LIVES! | Let’s check in on Esther and Janine. The former is still unconscious, but that doesn’t stop an angry Aunt Lydia — who looks like she’s been crying for days — from slapping her in her hospital bed. Then the older woman makes her way to Janine’s room, falling to her knees by the redhead’s bed.

Apparently, He listens. After Mrs. Putnam stops by to let little Angela be near her biological mother— like Janine did for the little girl when she was ailing after birth — Aunt Lydia wakes from dozing in a chair to find Janine’s bed empty… because she’s sitting outside, awake, in the sun. Now, will Aunt Lydia keep that promise?