If any show is ripe for a reboot, it’s Quantum Leap. The original 1989-93 NBC series had an irresistible premise — a hapless scientist is stuck traveling through time, inhabiting a different stranger’s body each week until he rights a wrong in their lives — and it remains a certified cult classic to this day. So it was only a matter of time before NBC decided to leap again, and the new reboot (premiering Monday at 10/9c) does offer some nifty updates on the original. Other parts are clunky, though, and NBC may need to keep tinkering to get this one right. 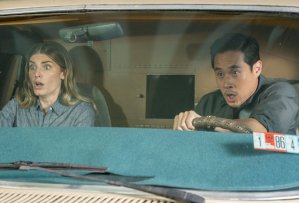 We pick up 30 years after the original show’s Sam Beckett was lost in time, with physicist Ben Song (Raymond Lee) leading a team that’s restarting the Quantum Leap project. Through a mysterious mishap, Ben soon finds himself in the same position Sam did, leaping into random people’s lives and figuring out on the fly what he needs to do to move on. Ben also has a hologram companion like Sam had with Al — but this time, it’s Ben’s fiancée Addison (Caitlin Bassett), who’s also a fellow member of the Quantum Leap team. He can’t remember her, though, due to leap-induced amnesia, and that bittersweet twist gives the reboot an intriguing emotional wrinkle that the original series lacked.

It’s in the well-crafted action scenes where this Quantum Leap really shines. In the premiere, Ben leaps into a getaway driver for a 1980s burglary ring and soon finds himself in a Baby Driver-style car chase, evading cops in a van with a wobbly stick shift, and later, he’s tasked with defusing a deadly bomb as the seconds tick down. Plus, the special effects get a sleek upgrade, with Addison using a futuristic virtual-reality setup to link into Ben’s timeline. The dialogue, though, isn’t as sleek: The burglary subplot is hampered by tired tough-guy clichés and sappy plot developments. 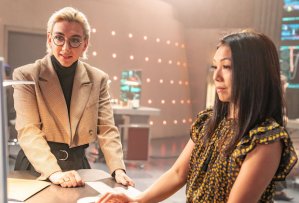 The reboot also gives equal time to the team at home, with Ben backed up by a quippy group of scientists straight out of a crime lab from a CBS procedural. Their scenes are stuffed with breathless exposition and tangled technobabble, and we get more answers than we ever got from Sam and Al — but do we really want to know all that? We didn’t need to know why Sam Beckett was leaping all over the place; we just enjoyed watching him do it. The premiere sets up a number of mythology-laden mysteries for us to puzzle over, like just about every show has to do these days. But by trying to overexplain everything, it threatens to ruin what made Quantum Leap so fun in the first place.

It’s hard to say how the reboot might develop from here, since NBC only sent out one episode to critics. Will the stories get better? Will the team scenes get less awkwardly expository? I honestly couldn’t tell you! But Lee does prove himself a worthy successor to Scott Bakula, juggling action, comedy and drama with ease. His considerable chemistry with Bassett, and Ben and Addison’s unique bond, are the biggest selling points so far, one episode in. We’ll just have to see if the rest of the series can leap up to where they are.

THE TVLINE BOTTOM LINE: NBC’s Quantum Leap reboot has a charming star and slick action scenes, but gets bogged down by corny dialogue and dead-end mysteries.