The following contains a spoiler from the very final scene of She-Hulk Episode 5, which was released on Sept. 15.

As it crossed the midpoint threshold of its nine-episode season, Disney+’s She-Hulk left us with a tease for a major Marvel hero’s arrival.

In Episode 5, titled “Mean, Green, and Straight Poured into These Jeans” (as in the About Me section from She-Hulk’s dating profile!), Jen (played by Tatiana Maslany) and GLK&H colleague Mallory (Renée Elise Goldsberry, finally getting a showcase) teamed up to fight superpwered influencer Titania’s (Jameela Jamil) shaky claim to the “She-Hulk” name. 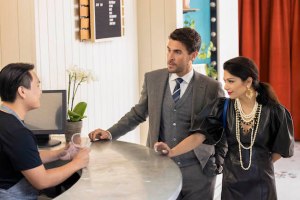 Amidst said legal action — and at persnickety Mallory’s insistence — Nikki (Ginger Gonzaga) called in a favor from colleague Pug (Josh Segarra) to use his “drip broker” to get Jen/She-Hulk some less-sad business attire.

With much coaxing, “drip broker” Luke (The Flight Attendant‘s Griffin Matthews) took on the client, and by episode’s end, he was sending Jen into a fitting room to try on her new businesswear… plus a little something “extra” he fashioned, presumably for when she becomes a crimefighting Avenger. 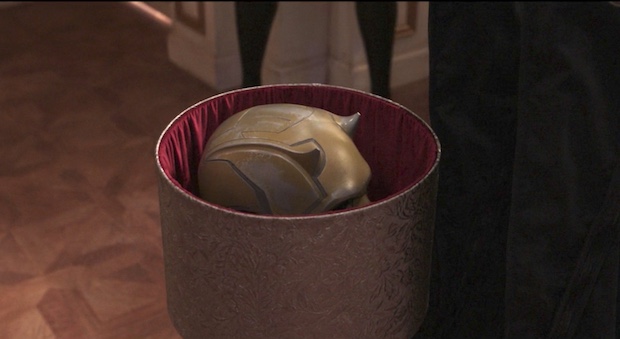 As Jen embarked on her try-ons, Luke spotted a hat box that had been left out for another VIP client, open, muttering to himself about his assistant’s carelessness. And as he set the box down to put on a lid, we got a peek inside at its contents — Daredevil’s helmet/cowl, which in its She-Hulk incarnation uses the yellow-and-red color scheme from the comic books.

TVLine asked Anu Valia, the director of Episode 5 (as well as Episodes 6 and 7), about when she first read the script and saw that she’d get to deliver the first Daredevil tease.

Valia also said that, “Yeah,” like many Marvel fans upon seeing recent trailers, she was a bit taken aback to see the show going with the yellow-and-red get-up for Daredevil aka Matt Murdock (to again be played by Charlie Cox) — but she would/could not elaborate on the literal costume change, saying, “I’m afraid to get into too much….”

The episode in which Daredevil/Matt first actually appears has not been revealed, though as TVLine’s Inside Line column recently suggested (based on quotes from Episodes 8-9 director Kat Coiro), it may not come until the end of the season.