Stan and Russell last played their characters in The Falcon and the Winter Soldier, while Pugh reprised her Black Widow assassin role during the back half of Hawkeye.

Stranger Things‘ David Harbour is also a part of the Thunderbolts cast, it was announced on Saturday at D23, reprising his own Black Widow role as Alexei aka Red Guardian. 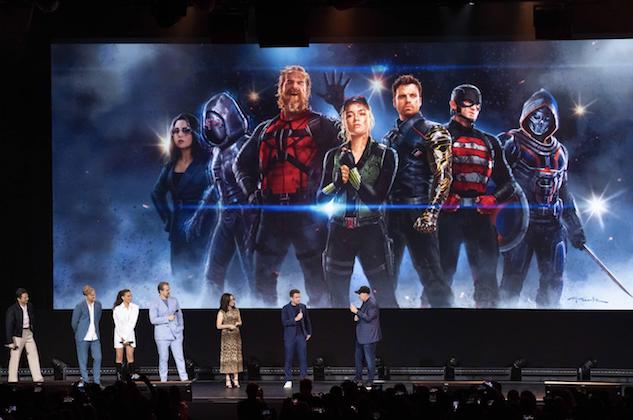 It was during The Falcon and the Winter Soldier and in Black Widow‘s mid-credits scene that the first seeds were planted for a Thunderbolts (think: “Marvel’s Suicide Squad”) team-up, as Julia Louis-Dreyfus’ Valentina Allegra de Fontaine respectively scouted out Walker (a new, disgraced Captain America whom she rechristened U.S. Agent) and sicced Yelena on her sister Natasha Romanoff’s “killer,” Clint Barton.

Louis-Dreyfus, as well as Black Widow‘s Olga Kurylenko (as Taskmaster) and Ant-Man 2‘s Hannah John-Kamen (as Ghost), are also in the cast.

Jake Schreier (Lodge 49, Kidding) will direct Thunderbolts, off a script by Eric Pearson (Black Widow). Shooting starts next year with an eye on a July 26, 2024 release, where the movie will close out Phase 5 of the MCU.