For Black women, our hair isn’t just hair; it is an integral part of our culture and identity. Depending on who you talk to, it can be a symbol of pride (as seen with the Black Is Beautiful movement), a source of pain and self-hatred, or a combination of both.

The Ms. Pat Show unpacks these complicated feelings around Black hair in the episode “Don’t Touch My Hair,” which is currently streaming with the rest of Season 2 on BET+. In Episode 3, Terry makes a careless remark about Ms. Pat’s kinky hair, and that dredges up some painful childhood memories.

“I was a little Black girl once and a lot of the pain and the misunderstanding comes when you’re a kid and how your parents comb your hair or what people say about your hair,” Patricia Williams — known by her stage name Ms. Pat — tells TVLine. “I went from Jheri curls to wigs, and my real hair was something I never really wanted to deal with.” 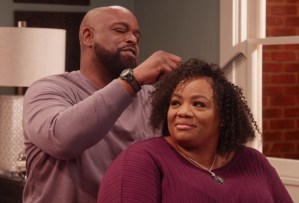 Williams realized that “a lot of the pain that I have behind my hair came from how my mom would comb my hair.” The memory of sitting between her mother’s legs and being called nappy followed her into adulthood, and the comedian struggled with accepting her kinky coils.

Contemplating that, Williams approached Ms. Pat Show creator, writer and showrunner Jordan E. Cooper about centering an episode of the Emmy-nominated series around Black hair. Given that many shows have already broached the subject — including the black-ish episode “Hair Day,” in which Diane (played by Marsai Martin) considers wearing her natural hair — Cooper knew he wanted to do something different.

Using a mirror to connect the past to the present, a grown-up Ms. Pat stares into the past at her younger self, who is getting her hair combed by her mother, who keeps complaining about her daughter’s “nappy” head while roughly tugging at her scalp. Confronting a difficult memory was emotionally tasking for the comedian, and showrunner Cooper recalls a moment where she nearly broke down.

“There was something about the journey of watching this woman do this episode. She’s looking in the mirror and she starts to cry, and she said, ‘Jordan, I can’t do it. I can’t do another one,'” the EP explains.  “I was like, ‘I got you. You’ve got it. You’re sane. You’re here. You’re beautiful,’ and she pushed [through]… With her strength in being able to do that, so many other people are able to look at themselves and think about things they haven’t thought about.”

In another moment, Ms. Pat’s younger self internalizes her mother’s comments and cries in the mirror because she doesn’t think she’s pretty. It is only after Ms. Pat tells her younger self that she is, in fact, beautiful that the adult woman finds the courage to wear her natural hair in the present day. But like the mirror confrontation, it took some encouragement for Williams to finally feel comfortable.

“I felt so ugly. I just wanted my wig back on,” Williams says of the moment she appeared on-screen sans the wig. “So many people were like, ‘Oh my God, I didn’t know you had so much hair. It’s so pretty.’ I remember standing there playing in the mirror. I was like, ‘Wow. I really do have nice hair.'”

With the episode, Williams also wanted show that Black women don’t always wear wigs because they hate their hair. “I don’t hate my hair now,” she notes. “[Wigs are] more for convenience now.” Ms. Pat explains this to Janelle (Briyana Guadalupe), pointing out that wigs are a protective style and that maintaining natural hair is “too much work.”

Season 2 has been a healing journey for Ms. Pat, who dealt with many painful memories of her emotionally and physically abusive (and now deceased) mother. With the show renewed for Season 3, Cooper says fans can expect to see more of those lighter moments.

“Season 3 is a complete breath,” he teases. “We’re still doing the work. We’re still having hard conversations. It’s very, I call it ‘very I Love Lucy.’ There’s a lot of fun.” And according to Cooper, that fun will includes guest stars Marla Gibbs (The Jeffersons) and Jaleel White (Family Matters).