Marvel’s She-Hulk this Thursday made the case for headlining her own Disney+ series. What say you, the jury?

As the series opens, Tatiana Maslany’s  ADAJen Walters is rehearsing her closing statement for a big trial, earning kudos from paralegal/BFF Nikki and a dismissive offer to handle the closer by colleague Todd. Jen waves off Todd as they head to court, but not before Jen turns to the camera to address something Nikki had just said. “Yeah, I’m a Hulk,” Jen shrugs, and as such, she suspects viewers won;’t be able to focus on this “fun lawyer show” until they know her origin story.

Cut to months ago, where Jen and her cousin Bruce Banner (MCU vet Mark Ruffalo) are on a road trip. Still nursing a wounded wing from Endgame, Bruce clocks an inhibitor device on his other wrist that keeps him in human form, while Jen details her theory that Steve Rogers was “very busy” as Captain America to ever get busy. She gets cut off, however, by a Sakaaran Class 8 courier craft, as previously seen in Thor: Ragnarok, and steers down an embankment into a crash. 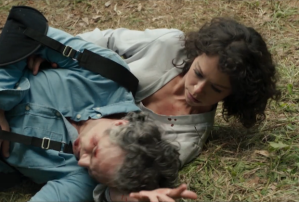 In the course of wriggling herself from the wreckage, Jen gashes a forearm badly. And as she drags out a dazed Bruce, blood from his own wound drips into hers, nearly instantly causing her to “hulk out,” as seen in a car door reflection. Bruce immediately panics over the accidental blood contamination, as Jen dashes off into the woods. She later surfaces, as herself, at a dive bar, where some young women spot her battered and bruised in the washroom and clean her up some.  Waiting outside for Bruce to come get her, Jen is hit on by a few oafs, whom she quickly fends off by unwittingly sprouting into her 6-foot-7, green self.

When Jen next wakes up, she is in a hut in Mexico. She ventures downstairs and finds Bruce, now in Smart Hulk form, toiling in the underground lab that Tony Stark had set up for him during the Blip; this, he explains, is where he learned to integrate his two identities into Smart Hulk. Bruce then informs Jen that her blood was hit with a lethal dose of gamma radiation, but their shared, rare genetic factors mean that she can synthesize the toxin. And in fact, he has used her blood to heal his right arm!

Over pancakes, Bruce makes clear that Jen’s inner Hulk isn’t going away — that the best he ever learned to do was merge his two selves — so he whips out a thick manual on “Being a Hulk,” which he complied over the past 15 years. (Did Edward Norton write the first chapter?) He then leads Jen back to his lab to trap her in a sealed room with approaching buzz saws, to test her ability to Hulk out. Not only does she do so, she lays waste to the chamber’s million-dollar door. Bruce is agog/jealous/impressed to realize that Jen is still very much Jen when a Hulk. There is no “second guy with his hand on the wheel,” no inside voice she has to wrestle with. The question then becomes, “How can Jen turn herself back?,” as Bruce warns that he was once “stuck” as Hulk for two years, in outer space.

Bruce proceeds to school his cousin on DBT and mindfulness, as well as the importance of reinforced bedroom furniture and Spandex. Powers like this can put a target on your back, he warns, but Jen is more focuses on her ability to metabolize booze — “All buzz, no barf,” Bruce boasts. The next day, while nursing a Hulk-sized hangover, Jen maintains, “I’m not gonna be a super hero” but simply return to the career she spent a lot of money and years building. Bruce contends that there is a way to “live between what we want, and what is,” if she can control her rage.

Jen hits Bruce with the reality that, as a woman, she has had more than her share of experiences suppressing anger — whether being targeted by cat calls, suffering through mansplaining, or fearing every step when out walking late at night. After demonstrating that she can transform between herself and She-Hulk at will, Jen packs to leave Mexico, but Bruce argues, “Who is going to protect the world if it isn’t people like us??” Jen shoots back, “I’m not going to become you, and have my life taken away from me,” pointing to his kinda-sad, oft-isolated existence. “Why would you want that for me?” Bruce counters that “denying half of your being is no way to live,” then asks, “Why wouldn’t you listen to someone who has been through this before?” As Jen literally Hulk-claps back at her cousin, a big, green brawl ensues, leading to the wrecking of Bruce’s self-built tiki bar.

Tensions cool as Jen helps Bruce rebuild the bar, during which he concedes that she can return to her normal life. We then cut back to Jen’s ADA office, where she tells the viewer, “So that’s how it all happened. My family knows, Nikki knows…. Now I’m going to go win this case. Lawyer show!” 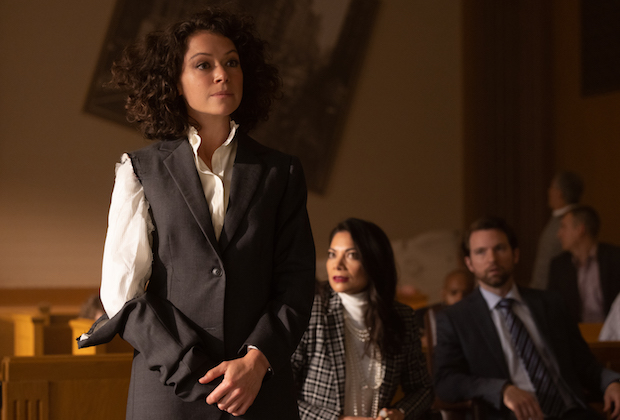 Jen Walters’ super-secret is about to come out, though. Just as she goes to deliver her closing argument, a superhuman named Titania literally busts through the courtroom doors. Nikki quietly urges Jen to do her “thing,” publicly for the first time, and — favorite outfit be damned — Jen kicks off her heels and swells into her She-Hulk form, to clobber Titania. Once this very random (and to-be-explained-later) threat is neutralized, Jen returns to her normal self, clothes a bit tattered, and plainly tells the judge, “I’m ready to give my closing argument now.”

That leads into the first closing credits, followed by a bonus scene during which Bruce sets the record straight on his buddy Cap’s alleged virginity. (Read much more on that reveal here.)

What did you think of She-Hulk‘s debut? And as always, if you seek scoop, email InsideLine@tvline.com!