Yes, Hawkeye may be competing at the Emmys as a comedy (and it did have moments both fwip!py and quippy), but She-Hulk is, as Tatiana Maslany’s title character tells us up front, a “funny lawyer show.” And whereas the likes of WandaVision, Loki, Falcon and Winter Soldier have all felt very much like [groan] “X-episode movies!,” She-Hulk (which premieres this Thursday) is by design more episodic in nature, eventually diving into legal Cases of the Week after establishing Jennifer “Jen” Walters’ big, green origin story in the first half-hour episode.

Now, let’s talk about the CGI, because you’re always gonna talk about the CGI. I’ve screened the first four episodes (of nine), and the visual effects are sometimes quite good (such as when Bruce Banner, played by MCU vet Mark Ruffalo, first forces his cousin Jen to Hulk out)… and sometimes scenes can feel verrrry animated. (In the first episode’s Mexico exteriors, the swaying palms behind the two CGI Hulks seem created with Photoshop’s cloning tool.)

She-Hulk herself is a visual that you pretty quickly get used to, after which you see past any perceived artificiality. (I personally theorize that Jen’s 6-foot-7 alter ego can look so “painted” because Ruffalo’s Hulk has the crags, creases and stubble of a Man of a Certain Age to provide realistic texture, whereas a young woman’s smooth green face can only look colored-in.)

Jen’s She-Hulk origin story, which unspools in the first episode, gets a bit repetitive — another case of an unwitting someone not wanting the gift of superpowers — but Maslany and Ruffalo enjoy a wonderful sibling-like banter that transcends the VFX they’re often hidden under. (Bruce’s meticulously prepared manual for “Being a Hulk” is a hilarious running gag, especially when Jen’s unique Hulking qualities force him to angrily rip out whole sections.)

Once Jen accepts her duality, things get much more zippy and She-Hulk transforms into “Lawyer Show!” — as she literally announces to the camera in one of the character’s trademark fourth-wall breaks. Well-established in the comics, the fourth-wall breaks are often very clever; I won’t spoil my favorite, but at one point Jen suggests that a crowd-pleasing cameo will give the show “plot armor on Twitter” for a week. The near-weekly mid-credits scenes, meanwhile, range from merely cute to MCU canon-creating. 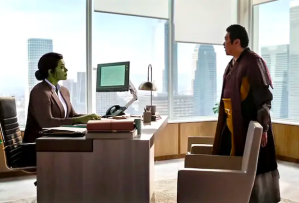 The Doctor Strange films’ Wong (played by Benedict Wong) shows up early on, not to serve up any supreme sorcery but instead to corroborate testimony from imprisoned Emil Blonsky aka Abomination (The Incredible Hulk‘s Tim Roth). Along the way, Wong amusingly develops a beef with a hack magician, and he also develops the most unlikely of bonds with a woo girl (scene stealer Patty Guggenheim). It’s a very fun showcase for the Wongs, though it can feel jarring in comparison to even the lightest moments in the established MCU films/TV series.

(I don’t recall seeing much of The Incredible Hulk, but Roth presumably seems to also have much lighter fare to play, and he appears to relish it, as Blonsky works toward a possible parole. Charlie Cox’s Matt Murdock/Daredevil does not appear in any of the first four episodes.)

She-Hulk‘s almost-sitcommy tone suggests that no world-threatening stakes will be at play, and indeed none are hinted at in early episodes. So if you’re tuning in for a towering, green version of Ally McBeal, you will be well-served; if you’re looking for high drama and huge additions to the MCU canon, you may have to settle for some Easter eggs — well, save for one very curious Episode 2 tease. Though that does make it one of the most easily watchable/digestible Marvel series, with each half-hour passing by in a blink. 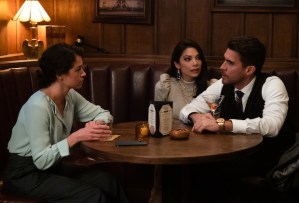 Maslany, no surprise, is absolutely charming as the title character, making Jen just the right amount of personally hapless but professionally impressive. She also really sells the talk-to-cameras in a way that would make Fleabag proud. It’s frankly difficult to properly grade the Emmy winner’s performance as She-Hulk, due to the “barrier” created by the CGI, but I’ll point to a first dates montage/payoff as some of her very best, comedic work.

The She-Hulk cast also includes Ginger Gonzaga (Champions) as Jen’s queer BFF Nikki, who in addition to serving as her paralegal also helps her friend navigate her newfound celebrity and the bustling dating app that comes with it; Jameela Jamil (The Good Place) as Titania, a superpowered super-influencer whose fleeting introduction in the first episode is easily the wobbliest scene of the first four episodes; and Josh Segarra (Arrow), Jon Bass (Miracle Workers) and Renée Elise Goldsberry (Girls5eva) as more of Jen’s legal peers.

THE TVLINE BOTTOM LINE: She-Hulk flirts with comedic might, but can feel dramatically slight.