In the Season 2 opener of Reservation Dogs, the recently ditched Bear is all sorts of mopey. Luckily for us, that means it’s William Knifeman to the rescue!

But before we get to Spirit’s tough (yet absurdly comical) love for Bear, here’s where we left the Rez Dogs: Elora took off to California with Jackie after an argument with Bear; Willie Jack and Cheese decided against leaving the reservation; and Uncle Brownie believed he had the power to stop a tornado that was ripping through the area. (Read a full Season 1 finale recap here.)

So was the gang all reunited in the Season 2 opener, and did Uncle Brownie ever find his clothes? Let’s recap the first two episodes.

At the top, Willie Jack gives Daniel’s photo (and us) an update as to what’s been going down since the tornado. Bear is still talking to his weird spirit pal “with the hard nips,” as we see him talking to no one and looking like a crazy person. Uncle Brownie’s still hanging out naked (LOL) and wondering if dogs can see him, while Mose and Mekko get their bikes hustled. “And Elora left with that bitch Jackie. She’s like our sworn enemy now,” Willie Jack adds. “The bad part is, I think it’s all my fault.”

As Bear’s moping outside Daniel’s old house (now up for sale), Spirit appears. Bear tells him that Elora went to California and ditched him, and Spirit says that since he’s got, uhh, some hair down there, he shouldn’t be acting like such a kid anymore. He needs to take responsibility for himself. Then the spirit guide admits to making up nonsense, quotes the band Kansas and moseys off after throwing a French fry in Bear’s face. (I’m really glad this show’s back.)

The gang learns that their hangout is being torn down by a construction crew. A Texas rancher bought the land, possibly to build a mega-church. Luckily they’re able to collect Daniel’s things that they placed there in memoriam. 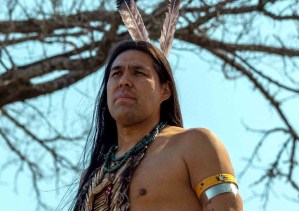 Brownie and Spirit are chillin’ out, as Spirit thanks the creator for the “sacred” Sonic tater tots he’s eating. (Insert Napolean Dynamite‘s “Gimme some of your tots” GIF here.) He tells Brownie that the white man took warriors’ “man moon” from them, and that Crazy Horse was the last one to experience it. Even though he confirms that Brownie’s not a Holy man, the crazy old man just doesn’t believe it.

Later, the kids find Brownie talking to himself and think the guy’s delusional. Willie Jack tells Brownie about the curse and he shakes his head when she says she used white medicine. And so they go off on a quest to try and reverse the curse. They go talk to the guys at the bar and go see Willie Jack’s aunt. Both are dead ends. Bear soon gets frustrated and tells Willie that there isn’t a curse. It’s just “kid s–t.” Bear says he supports her, but he’s gotta bounce.

So what’s up with Elora? She and Jackie cruise down the highway, but after picking up provisions (and a gnarly knife), their car breaks down. They hitchhike and get picked up by Victor, a creepy white dude who offers them snacks. They tell him their names are “Janet” and “Jackson” — totally believable!

The guy rambles on, until he takes a mysterious turn down a dirt road that makes the girls extremely uncomfortable. Jackie kicks the guy in the face a couple times, while Elora stabs him in the shoulder. Unfortunately as they flee, they leave all of their belongings in his car, including their money.

Over catfish, Jackie asks Elora about Daniel. Then she shares that her brother also died. Jackie says their next best bet is to try to steal a car, but their first attempt is botched when they’re spotted and chased down by a truck of shotgun-toting rednecks. 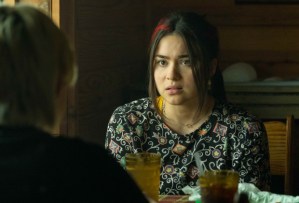 In Episode 2, the girls aren’t shot dead, but rather are taken in by a woman named Anna (Megan Mullally). She kindly offers them food and shelter. As they settle in to sleep, Elora breaks down crying, while Jackie lifts the woman’s keys and sits in her truck.

As Elora sleeps, she dreams of Daniel and Bear. She feels guilty for having left them both behind. Jackie wakes her up from the nightmare. As they jack the truck and pull out of the driveway, Anna looks out from her window: “Those little sluts.”

Back at the reservation, Cheese, Willie Jack, Brownie and Bucky say a prayer by lake. The “prayer” (in quotes?) reveals a lot about the old men, including the fact that Brownie slept with Bucky’s old lady back in the day while the couple was broken up — details! Then they all sing Tom Petty’s “Free Fallin'” as the Spirit watches. This is all a bunch of crazy, but in the best possible way. The Spirit then tells Brownie that the ceremony is complete and the curse is vanquished, but it’ll remain in their hearts until the kids deal with their guilt.

Jackie and Elora visit Jackie’s mom. She bums some money, but steals the cash the woman drops on the ground. With gas money secured and a brand new truck, they tow Elora’s car back to the reservation.

Willie Jack finishes her story to Daniel: “You just hope the curse is lifted and that things get better, but to be honest, it just doesn’t feel like it’s over.”

Now it’s your turn. Thoughts on Reservation Dogs’ new episodes? Grade them below, the light up the comments.