The Reservation Dogs have been through grief, heartache, abandonment and general neighborhood rough-and-tumble. But in Monday’s Season 1 finale, everything comes to a head, including some previously low-key drama between Bear and Elora that may or may not have changed the group’s plan to migrate west.

By season’s end, did Bear, Elora, Willie Jack and/or Cheese achieve their California dream? Find out in the recap below — stoodis!

Bear is once again visited by his vision, Spirit. Bear tells him he’s “finally going to California today,” but Spirit asks whether he’s finished all of his “deeds” around town. Of course, the cryptic Native has no answers, only questions (and impeccable comedic timing, mind you), so Bear wrongly assumes it’s his destiny to kick the asses of the rival gang before he skedaddles out of town.

Later, the gang runs into Uncle Brownie, who tells them a tornado’s brewing. He can stop it, he just needs an axe and some tobacco. (Yeah, I don’t know what any of that means either, but I love this nut.)

The pals count their cash, knowing that today’s the big day, until Willie Jack drops a huge bomb: She’s out. “This place eats people,” says Elora through her own irritation. While they’re not happy with W.J.’s decision, the other three confirm to each other that they’re still in. Willie Jack gives them some money and promises to visit when they’re settled.

Bear then tells them about the spirit he’s been seeing. “He says we’ve got some unfinished business to deal with,” he recounts. “We’ve gotta fight the Indian Mafia, once and for all.” While Elora keeps her eye on the California prize, the rest of them feel they’ve got to do what their spirit ancestor told them to. But seconds into the rival gangs’ war of words, golf ball-sized hail begins to fall, and everyone scatters.

Both gangs wind up seeking refuge in a church basement, along with Big, Willie Jack’s parents and some others from the reservation. While Elora and Jackie have a mysterious conversation from afar, Bear’s spirit guide tells him again, “There’s still something you haven’t taken care of.” Bear tells him the tornado botched up the big battle, to which the spirit responds: “Maybe, just maybe, that’s not what the f–k I was talking about.” 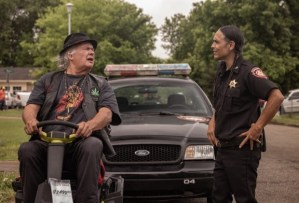 Elora tells Bear she’s sick of cleaning up after him, doing all the work while he sits back creating problems. She saved the money, and got the car and license. “You know you never really wanted to go to California in the first place, and now we’re gonna go there, and you’re gonna mooch off me the entire way,” she barks. “Your dad would be f–king proud.” Ouch. Elora: 1, Bear: 0.

Their argument then segues to Daniel. Bear bites back, saying that he stays up at night thinking about their friend when he was alive, when all Elora can do is think about the fact that Daniel’s dead. And we’re tied up! Yeah, it’s a pretty brutal battle between friends here.

Willie Jack breaks the tension, saying that her mom and dad are great parents, and not just to her, but to her late cousin, too. That’s why she wants to stay in Oklahoma. She feels she has so much more to learn from them. Cheese then takes the floor. He’s not going to California either! He sits back down without giving us a reason.

Cut to: Uncle Brownie standing on a roof, waving an axe at a storm. (Can Gary Farmer be a series regular next season? Pretty please?)

When the storm subsides, Bear figures he’ll talk things over with Elora in the car. But later, Elora pulls up to Jackie’s house instead. “You’ve got gas money, right?” Jackie says yes and gets in the car. The two girls drive off, as Bear waits on the curb for a ride that’s never going to come.

We close with Brownie waking up in the middle of a field completely naked. Bear’s spirit pal arrives on horseback and tells him he’s going to guide him and show him the good life. Spirit lets out a few Native calls, before emitting a series of coughs and grunts.

Now it’s your turn! Grade the finale and season below, then let ‘er rip in the Comments!