If you watched Season 1 of HBO’s Industry and found it “cold” or “alienating,” creators Mickey Down and Konrad Kay don’t disagree. But that’s also partly what made the series so damn compelling.

Its sophomore season (which premieres Monday, Aug. 1 at 9/8c) takes place one year after the height of the pandemic. Harper, Yasmin and Robert have all secured their desks on the trading floor, which is more charged up and paranoid than ever thanks to shifting economies post-COVID. And with new U.S. management arriving in London to fan the flames, the pressure to drive new business is higher than ever.

“We wanted to present a universe where all of the stuff in Season 1 was true, but there was the hope of connection and vulnerability between these characters,” adds Kay.

While the characters may be more relatable this season, don’t expect the pressure-cooking world around them to soften. Not even a little bit.

“Anytime anybody wants to show that vulnerability, it’s somehow used against them or co-opted, or they somehow miss the connection which hardens them up,” says Kay. “Control is an important thing, especially with these trading interactions and calls on the market. They’re all trying to control their little piece of the universe, which is a bit highfalutin, but they’re all trying to basically grab on to some sense of certainty anywhere they can.”

“There’s a yearning between the characters that — and this is a reductive thing — but a lot of times in the season, characters are basically asking for, without saying it, a hug or asking for love,” adds Down. “Harper and Eric are an example of that.” 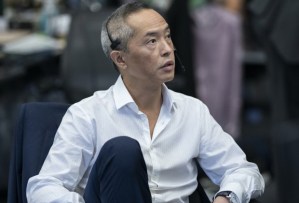 And the relationship between mentor and mentee is as complicated as ever. If you’ll remember from Season 1, Harper was instrumental in both getting Eric fired after he aggressively locked her in a room to chew her out, and paving the way for his return by throwing another manager, Daria, under the bus. (Read a finale recap here.) In Season 2, expect things to be far from hunky-dory between the two.

“Eric is a super hardened individual with over 30 years in the business, and he grew up in a period when the business was very hard-edged,” says Down. “He has this person [in Harper] who he is proud of in some respects and has molded in some respects, but they’ve had a really tempestuous relationship. There are certain moments where you think if they just told each other how they felt, they would actually be OK, but because of the world they’re in, they’re unable to do it.”

Down calls Harper and Eric’s reunion a “Faustian pact.” While Harper half expects things to go back to the way they were, she also comes to the cold realization that she’s never even had a proper personal conversation with Eric despite the amount of face time they’ve shared thus far.

“She’s expecting her mentor to be like, ‘You’re back! We can restart the relationship we had in Season 1,'” but he isn’t because firstly he’s thinking, ‘Even though you brought me back, you did kind of f–k me over by telling the higher ups that you were locked in a room.'”

Eric will also be dealing with an unwanted existential crisis, as an offer for a less-stressful position off of the floor pushes him to consider his own mortality, in the business and beyond. The analogy they kept coming back to in the writers room was that of a Western.

“You have the old cowboy who’s not quite ready to hang up his hat, even though he knows his time is up, and a young gunslinger who can only really get ahead by going under his wing,” explains Kay. “But then having this relationship where they know that by the end of it, even though they’re very close and they have this unspoken bond, one of them is going to have to put paid to the other. It’s generational warfare.” 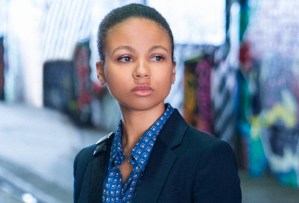 The tension between them is amplified by the electric performances of Myha’la Herrold and Ken Leung (who play Harper and Eric, respectively). As Kay mentions, it’s hard to tell if they’re going to hug each other or kill each other, and that drama carries throughout every single scene they share.

“There are bits where it feels like she’s talking to someone on her level rather than someone who’s been in the business for 30 years,” Down says. “Myha’la is so good at giving us a confident performance that’s almost delusional. Sometimes you’re watching the dailies and thinking like, ‘Harper, wow, slow down!'”

Of course, the new season is also filled with plenty of the salacious goodies we’ve come to expect from Industry, including loads of gratuitous sex and drug use. Work hard, play hard. It’s all par for the course.

“What I’m really proud of in Season 2 is that underneath all of the scenes that seem super hard, there’s a tenderness that wasn’t there in Season 1,” says Kay. “But it’s always just slightly out of reach, which makes it a quite frustrating viewing experience, but one that’s, quite weirdly, very watchable.”