The Industry grads’ trial run is over, and after countless hookups, drug binges and even a tragic death, their day of reckoning is finally here.

While the graduates continue hustling for recommendations and massaging client relationships in preparation for RIF (reduction in force), their time to prove their worth is quickly running out. Who secured their desks, and which Pierpoint staffer was shown the door? Let’s break it all down.

The day before RIF, Harper isn’t the only newbie feeling the pressure. While Rishi gives the grads some performance tips, Sara requests a lunch with Gus. Could this give him a chance to curry favor with the Big Boss, or is this a red flag? Before she can get to it, Gus throws daggers at the bank’s corporate culture, bringing up Hari’s death and the company’s refusal to take responsibility for it. While Sara admits she didn’t see Gus’ talent at the onset, she encourages him by saying there’s no limit to what he can accomplish at Pierpoint.

Harper asks Daria to vouch for her, reminding her superior that she’s the only grad who’s printed business, while the rest of them are “glorified desk assistants.” Daria’s suggestion: Get some sleep. “I wouldn’t be your friend and your boss if I didn’t tell you that I’m not convinced this environment mixes well with whatever it is that you’re going through.” Harper then pulls out the big guns, telling Daria that she was the one who put Harper in front of a client (Nicole) who sexually assaulted her, but Daria is suspicious of the allegation’s timing.

Robert is first to stand in front of the firing squad. As he admits he hasn’t secured business yet, his nose begins to bleed. (Dude’s seriously got to lay off the nose candy.) He exits abruptly, and it seems his ship may have sunk.

Yasmin asks Kenny if he’ll put in a good word for her, but he’s tired of tiptoeing around their relationship. (I’m over it, too, Kenny!) When she threatens to blast him during RIF or go to HR, he challenges her. “How does that play out? You drag me through a few things. You get paid. I get a slap on the wrist. You have a mark next to your name and have people talk about you for the rest of your career?” He quickly turns heel and says he’s only “f–kin’ about.” Frankly, this guy just sucks. 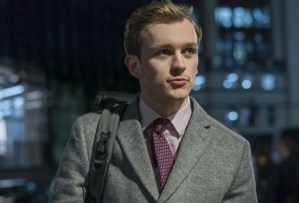 After his presentation, Daria tells Robert that none of his spiel worked on her. “I don’t want to be a babysitter… especially to you,” she tells him. “You don’t have a future on my desk because you’ve never displayed that you have any value. To me, you’re worthless.” Savage, yes, but Bobbo kind of deserves it, right?

During Yasmin’s presentation, she’s asked to define the corporate culture, and she tells the panel exactly what they want to hear, calling it “a culture of every man and woman lifting each other up.” Has she felt supported throughout? “Absolutely. I really feel part of a team,” she replies like a good worker bee. Yep. Kenny called that bluff.

Harper asks Yasmin what “her game” is, and it’s clear that Harper is paranoid and spiraling. Yasmin assures her that she was only asking Daria to switch desks, and that any success of Yasmin’s shouldn’t detract from Harper’s. Yas says that Harper’s friendship is the best thing that happened to her at Pierpoint. Harper thanks her, but the feeling doesn’t quite seem mutual.

Gus, still at odds with corporate BS, presents the following: “Buy the dip. Short the VIX. F–k Bitcoin. Thank you for the opportunity.” Mic drop! When it’s finally Harper’s turn, she can’t get any words out. Nerves take over and she hightails it outta there.

As the senior execs discuss the candidates, Robert gets pros for being a client favorite, Sara goes to bat for Gus and Daria comes through for Harper, after all. “If we were to define a Pierpoint person as a producer, hardworking, someone who truly puts the job ahead of herself, then she’s the easiest hire we’ll ever make.”

Later, Harper’s brought into a meeting with Bill, an executive from New York, and (surprise!) Eric. Bill wants Harper and Eric to hash it out, and if she retracts her accusation, things could potentially work out for everyone. Sara interrupts the meeting to snag Harper, telling the grad that she aims to change the culture. Sara offers her the job and her full trust, but when Harper asks, “What do you really know about me? Other than when you look at me, you clearly see a victim?” The scene cuts, and we aren’t privy to Sara’s response.

After, Eric thanks Harper “for bringing me home.” Daria then apologizes for not believing Harper, and tells her they’re going to change things together. But when Yasmin comes over to celebrate, a couple men begin packing up Daria’s desk. “Daria’s gone and Eric’s coming back,” Harper tells Yasmin. “I told them that Daria had her own agenda and pressured me into saying something that wasn’t true.” Yasmin is livid, calling her friend selfish and unbelievable; Harper counters calling Yas “weak and a f–king hypocrite.”

In the season’s final moments, Daria is escorted out of the building, as Harper opens the journal Yasmin gifted her episodes ago. The inscription reads, “Here’s to (y)our future, Love you, Yasmin x.”

Does Harper deserve her seat at the table, or are her workplace politics far too messy? Vote in the polls below, then sound off in the Comments!