If you follow Big Brother‘s live feeds, or the various blogs that chronicle them, you already know that many more exciting things have happened in the house since Pooch and Taylor were on the block last week, and the summer’s first (true) eviction is already a distant memory.

But due to some schedule rearranging on CBS’ part, last Thursday’s eviction episode was delayed by several days, and Big Brother instead played catch-up with a two-hour installment on Sunday night. Let’s recap what went down:

THE STRATEGY | Following the Power of Veto meeting — which left both Pooch and Taylor in those nomination seats — Pooch still seems perfectly confident that he’ll remain in the house come eviction night. But Joseph is starting to suspect that Pooch is the actual target here, and Kyle gets word from Alyssa that an all-girls alliance was initially suggested back when Paloma was still in the house, prompting more theories that the men will be in the ladies’ crosshairs all season.

Monte, meanwhile, is of the opinion that Pooch should stay, after all; it’s not benefiting his game at this point to send Pooch packing, and anyway, did the rest of the houseguests not witness that latest veto competition? Taylor smoked Pooch, even in a mermaid tail! Monte and Nicole have a disagreement about this week’s appropriate target (see: Nicole bullies Monte into seeing things her way), and just like that, the Po’s Pack alliance seems to weaken.

THE EVICTION | As is usually the case in these early BB weeks, the last-minute suggestions to flip a vote or target someone else ultimately don’t materialize into anything. And it’s the same thing here: Pooch is evicted by a vote of 12-0 (oof!), and though he’s clearly shocked when Julie calls his name, he theorizes in his post-game interview that the houseguests likely didn’t want to pass up a golden opportunity to evict him. The real revelation here, though, is that Pooch and Turner apparently had a Final Two deal, and yet Big Brother devoted absolutely no screen time to an alliance called Turner and Pooch. The nerve! 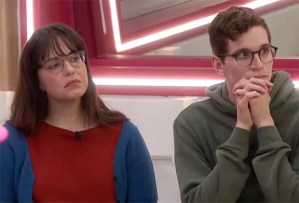 THE BIG TWIST | Ahead of the next Head of Household competition, Julie finally reveals this season’s major twist, called Festie Besties. (I assume I’m alone in initially thinking she said Fessy Besties, and that BB20 contestant Faysal was somehow involved. Would have been fun, though!) In short, the houseguests will be paired off into “bestie” duos; besties will be nominated as a couple and will play in competitions as a couple, meaning that they’ll both earn safety if one half of the pair wins Head of Household or the Power of Veto. On eviction night, though, the nominated besties will be broken up, and only one of them will be sent home. As for what will become of the bestie who isn’t eliminated and remains in the house partnerless, Julie will have more details at the next eviction.

At the end of the HOH competition — which is essentially musical chairs, with a little endurance twist — the Festie Besties are as follows: Brittany and Michael; Joseph and Monte; Taylor and Nicole; Daniel and Kyle; Indy and Alyssa; and Ameerah and Terrance. Turner, meanwhile, clinches the HOH victory, and he’s automatically paired with Jasmine, who’s once again safe for the week.

THE NOMINATIONS | With the Festie Bestie twist having thrown a wrench in everyone’s strategy, Turner now has plenty of new factors to consider when picking his nominations. Michael/Brittany and Nicole/Taylor emerge as the top contenders — and actually, Nicole wants herself and Taylor to be backdoor nominees later in the week, so that Taylor can go home and Nicole can potentially reap whatever benefit might come from being a bestie-less houseguest. (Y’all, this obsession with Taylor… exhausting.)

In the end, Turner nominates Brittany and Michael for eviction… and Michael promises in the Diary Room to win his third straight veto.

OK, your turn. What did you think of Sunday’s super-sized episode? Were you sad to see Pooch go? Tell us below!