Onetime Bridgerton heartthrob Regé-Jean Page has not joined the MCU, but instead was listed among the cast of Disney+’s Secret Invasion series in error.

A Disney spokesperson phoned TVLine late Saturday evening to state that Page, who currently can be seen in Netflix’s The Gray Man movie, is not part of Secret Invasion, and was accidentally included with the official cast list. 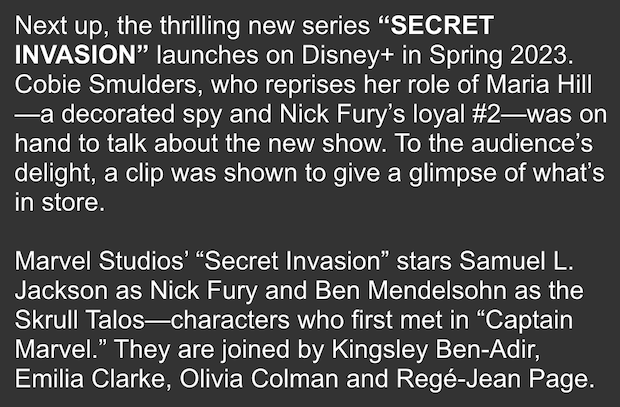 Though Page’s Secret Invasion casting proved to be a typographical error, the British actor had once been eyed to join the MCU as Adam Warlock in Guardians of the Galaxy Vol. 3, but the role ultimately went to Maze Runner‘s Will Poulter.

Secret Invasion stars MCU vet Samuel L. Jackson as Nick Fury and Captain Marvel’s Ben Mendelsohn as the Skrull Talos. The crossover event series — which is set to premiere in Spring 2023, as an early part of the upcoming MCU Phase 5 —  showcases a faction of shapeshifting Skrulls who have been infiltrating Earth for years.

Want scoop on any Marvel TV show? Email InsideLine@tvline.com and your question may be answered via Matt’s Inside Line.