Series creator Mike Judge will continue to voice both of the titular slackers, who are “back and dumber than ever,” according to the official logline. New episodes will see Beavis and Butt-Head “torment each other” and “confound common sense.” In other words, nothing’s changed in the 11 years since Season 8.

In addition to the premiere date reveal, Paramount+ has dropped a new trailer for B&B, which you can watch above.

“Beavis and Butt-Head were defining voices of a generation, and to this day, the show is one of the most well-known and beloved animated IPs of all time,” Chris McCarthy, president and CEO of Paramount Media Networks and MTV Entertainment Studios, said in a previous statement. “Mike Judge has reimagined this dynamic duo in a way that is sure to have both old fans and new ones alike laughing out loud — and we couldn’t be more excited to bring them back into our rapidly expanding arsenal of hit adult animation.” 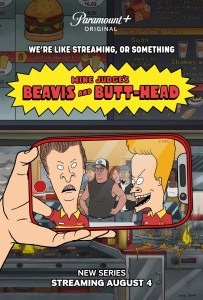 The series originally aired on MTV from 1993-97, then came back for an eighth season on the network in 2011. In July 2020, Comedy Central ordered two seasons of a “reimagined” Beavis and Butt-Head series; that project was shuffled to Paramount+ in February 2022. Plus, the full library of Beavis and Butt-Head‘s 200-plus original episodes has begun hitting Paramount+ in batches; as of press time, select, remastered episodes from Seasons 4-11 were already available on the service, along with the 1996 feature film Beavis and Butt-Head Do America. The full library will be available “soon.”

Are you looking forward to new Beavis and Butt-Head episodes? Sound off in Comments.