The Bachelorette is back… but we should really be calling it The Bachelorettes, since ABC has taken the (sort of) unprecedented step of giving us not one but two ladies to hand out roses this season.

Gabby and Rachel, both freshly dumped by Clayton last season on The Bachelor (remember that whole fiasco?), are both looking for love together — and how will ABC make it up to them after they had to endure a hellish breakup on national TV? Why, by making them compete for the same men all over again, of course! Yes, Gabby and Rachel will be picking from the same pool of men this season, and do you think there’s a chance they might develop feelings for the same man? Well, the producers clearly hope so. 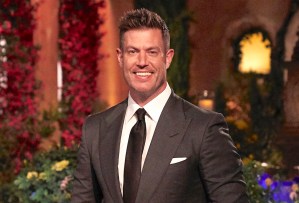 Host Jesse Palmer sets up the season by telling us it’s the first time we’ve had two Bachelorettes. But am I the only one who remembers the season that started out with Kaitlyn and Britt, where the guys picked Kaitlyn to be the sole Bachelorette? (At least they’re not repeating that humiliation this time.) Gabby, a goofy ICU nurse, and Rachel, a starry-eyed flight instructor, bonded during their Bachelor season (“What we went through with Clayton, it was torture,” Gabby recalls), and they’re excited to take this journey together, moving into a castle and guzzling Champagne straight from the bottle. But “how is this going to work,” exactly? Get ready, because if you took a drink every time someone said that during the premiere, you’d be smashed before any roses are handed out.

(P.S. Did I just hallucinate a Bachelor promo that said, “Your boyfriend’s a loser! Everybody knows it! Dump his ass and apply to be on the next season of The Bachelor“? Please tell me I did.)

Gabby and Rachel both greet the men as they make their limo entrances, and some make a memorable first impression: “Meatball enthusiast” James brings them a gigantic meatball sub, and Tino drives up in a forklift, telling them they look “forking gorgeous.” (That line works on Rachel, anyway.) But some fumble right away: John mixes up their names (ouch), and Hayden loses points by bringing up Clayton. It’s a dizzying array of guys — 32 in all, including identical twins Joey and Justin — and Gabby predicts “there’s going to be hardship” if and when she and Rachel start to develop feelings for the same guy. You can almost hear the producers rubbing their hands together in glee… 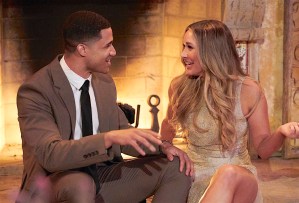 Once the ladies get inside, magician Roby pulls them aside first to wow them with a card trick. They also chat with twins Joey and Justin… but “it just ain’t working for me, romantically,” Gabby admits. Hayden establishes a quick connection with Rachel, giving her a birthday card he made for her, while Gabby sits down for a chat with shirtless horse rider Jacob — but she’s distracted by his pecs. She connects with doctor Mario right away, though, and gives him a kiss. Rachel was hoping to get her own kiss from Aven, and then from race car driver Jordan V., but she can’t find the right moment. Finally, it arrives with forklift guy Tino, and they lock lips. She and Gabby exchange notes afterwards… and hey, at least they kissed different guys! 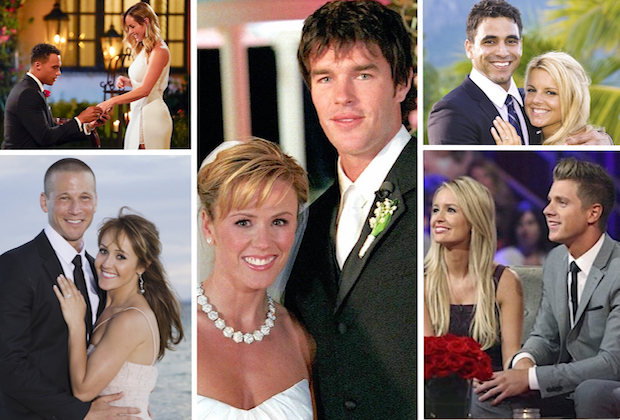 The competition heats up, though, when Logan — who got out of the limo with two baby chicks in his hands — cozies up to Rachel, and then to Gabby, too. Erich, who invited the girls to tie his tie for him during his entrance, also gets cuddly with both ladies, even kissing Gabby. When it’s time for the First Impression roses, though, Rachel hands hers to Tino, and Gabby gives hers to Mario. But with so many guys in the mix, they start to feel overwhelmed as the first rose ceremony looms. So they bend the rules a bit, saying goodbye to magician Roby and twins Joey and Justin before telling the other 29 guys: You’re all staying! Is this Bachelor mansion equipped with bunk beds? (And man, how rough is it to be those three who didn’t make the very generous cut?)

After they all toast, we’re given a sneak peek at the whole season, which promises lots of kisses, lots of international travel (Paris, ooh la la!) and lots of drama. Several guys turn down Rachel’s rose in favor of Gabby’s, and Hayden tells Gabby that he’s more into Rachel. It all ends with Rachel sobbing in a hallway again… because the more things change on The Bachelorette, the more they stay the same.

Give the Bachelorette premiere a grade in our poll, and then hit the comments and tell us: Who’s your early favorite for each lady’s final rose?