The Bachelor‘s Clayton loves all three of his final women, of course — but which one does he love the most?

As Tuesday’s season finale begins, he has managed to get back in the good graces of Gabby and Rachel, even after last night’s “rose ceremony from hell,” where they found out he was in love with both of them and was “intimate” with both of them, too. But that’s not enough for him: He still can’t stop thinking about Susie, who walked out on him after hearing what he did with the other two. (Does this guy only want what he can’t have? Very possibly!) 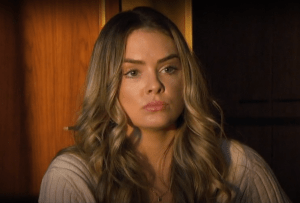 Jesse drops in on Susie, who’s still a little rattled from their breakup, and he tells her Clayton is devastated and wants her back. Susie agrees to see him, but when they sit down, she tells Clayton how shocked she was by how he treated her after she walked out on him. “It was humiliating,” she tells him. “If you have love for me, how could you treat me like this?” (Great question!) He scrambles to apologize and pushes her to give him a second chance: “I love you, and I don’t want to lose you.” She says she can’t make that decision right now, and she needs to think it over, but she appreciates his apology. She leaves him alone to think, too, and he decides he wants to be with Susie… so he needs to break things off with Gabby and Rachel. Uh-oh. 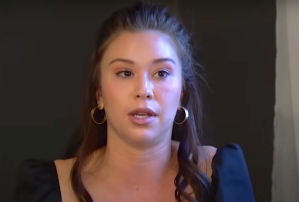 Clayton faces the firing squad, sitting down with both of them at the same time — way to save time, buddy! — and apologizing for all the pain he’s caused them… before telling them his heart is with Susie. Gabby tells him he really should’ve told them this earlier before storming off, and he meekly follows, where she unloads on him. “I can’t believe anything you say. Not one thing,” she declares before berating him for talking them both into staying only to dump them the next day. He tries to explain his sliding scale of love again, but she stops him: “You sound actually ridiculous.” He offers to walk her out, but she just gives him a disgusted sneer: “No.” (Gabby for Bachelorette. No, for President.)

On the live show, she tells Jesse she was in love with Clayton at the time, but “looking back, I didn’t know everything.” But now she sure does! They bring Clayton out, and she tells him how “misled” and “betrayed” she felt by him. He mutters his way through a tepid apology, and he seems really beaten down already. The night is just getting started! 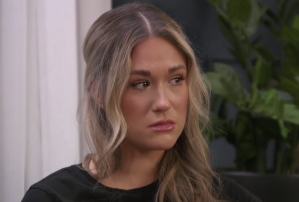 Back in Iceland, Clayton goes back to console Rachel, and she interrogates him on his definition of love, tearfully recounting how he led her on and asked her to fight for them just to cut her loose. “When you look back on this, this is going to haunt you,” she predicts between sobs. “You gave up on us,” she tells him as he walks her out. (Is anyone keeping track of how many times Clayton has said “sorry” tonight?) “He didn’t even shed a tear,” she realizes as she drives off. “He was never in love with me.”

Rachel’s dad grimaces in the crowd as she joins the live show to talk about how “blindsided” she was by Clayton’s actions. (“He couldn’t even break up with us separately.”) She doesn’t have feelings for him anymore after watching him “disrespect” her and Gabby like that, and when he comes out, she scolds him for how “selfish” he was. He throws a few more “sorry”s at her, which are just white noise at the point, and she fires back: “I just don’t believe you.” She asks him point blank: Did he tell her he loved her just to sleep with her? He says no, it’s what he felt at the time. He lives in the moment, guys! 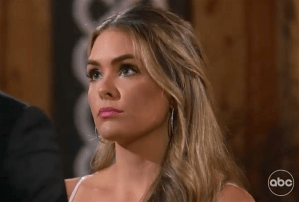 OK, two down, one to go: Clayton now has his sights set on Susie, the girl he loves the absolute mostest (in the moment), and he has a Neil Lane engagement ring locked and loaded. He sends Susie a very long letter with lots more “sorry”s, inviting her to join him at a Game of Thrones-y barn for the final rose ceremony. She agrees to meet him, and he breaks down into a huge smile when he sees her arrive. He launches into a huge spiel about how much he wants to make a life with her, asking her to give it one more try. She tells him she loved his letter and believed every word of it… but… “I don’t feel like the kind of love I have for you right now is the kind of love I have for you right now.” She’s decided to leave Iceland alone, and when he asks if there’s any chance they could ever get back together, she shuts him down: “I feel like it’s over.” She drives off — and Clayton becomes the first Bachelor ever rejected at his final rose ceremony. Ouch.

But there’s a twist! Clayton tells the live audience that after he went home, someone reached out to him: Yep, it was Susie! Womp-womp. She comes out and insists that leaving Iceland was “the best decision I could’ve made,” but they had time to think things over back at home. She ends the suspense: “That’s my boyfriend,” she giggles. Congratulations…? She tells him she loves him, and they seem very schmoopy together. “We all make mistakes,” she says, and she expects some “backlash” from the public, but she hopes people will root for them. Well, best of luck with that! Clayton stops short of proposing, but he is moving to Virginia to be with her. He walks off stage to collect the contractually obligated final rose, and she accepts it with a kiss. Yeah, great, whatever.

The Bachelor: How Long Each Couple Lasted, From Shortest to Longest

Gabby and Rachel do get a consolation prize, though: They’re going to be the next Bachelorettes together! Let’s just hope they don’t fall in love with the same guy again.

Alright, Bachelor Nation, time to have your say: Who should Clayton have ended up with (if anyone)? Vote in our poll, and hit the comments to share your post-finale thoughts.