Ms. Marvel director Sharmeen Obaid-Chinoy previously told TVLine that Kamala would find her voice in Episode 5, and now we know just how she accomplishes that.

But before we get to the teen hero, who’s been transported back in time and right in the middle of the chaos of the Partition, a news report at the top of Wednesday’s episode offers more context.

The report explains that following 200 years of British rule, India was split into a secular state with a Hindu majority and Pakistan, which was reserved for Muslims. There were violent outbreaks and a mass migration, “a consequence of a century-long British strategy to divide and rule.”

In 1942, when India was still occupied, a man named Hasan advocates for independence, and his gathering is broken up by British soldiers. Later, he finds a woman sleeping under a tree on his land and offers her food and a place to rest. It’s Aisha, who seems to be running from something, but he isn’t sure what. They bond and eventually have a daughter named Sana (aka Nani).

But as tensions rise, the couple experiences discrimination for being Muslim. Locals have stopped buying Hasan’s flowers and refuse to sell milk to Aisha. One evening, Najma shows up after searching for Aisha for years. It’s time for them to return to their home dimension, but after starting a family of her own, Aisha isn’t exactly thrilled about that.

The following day, Aisha insists they leave because their home is no longer safe for Muslims. As she, Hasan and Sana walk to the last train out of the country, Hasan asks about the woman he saw her speaking to the night before. That’s when Aisha comes clean about her magic, showing him the bangle while demonstrating her powers. She makes Hasan promise to get Sana on the train no matter what happens, and he tells her that nothing is going to happen. 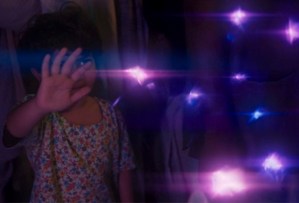 Aisha separates from her family to protect them from Najma, who’s determined to find the bangle. Najma stabs Aisha for betraying the ClanDestines and goes searching for the magical jewelry. In the chaos, Sana is separated from her father. Aisha, meanwhile, grips a photo of her family and uses her last bit of strength to cast a spell.

“What you seek is seeking you,” she utters, the same words inscribed on Kamala’s bangle.

It’s at that exact moment that Kamala is sent back in time. She finds a dying Aisha, who tells her she has everything she needs before passing away. Kamala then reaches Sana and uses her powers to guide the child back to her father. But Sana turns Kamala’s light platforms into stars — the same stars from Nani’s story — which help her the rest of the way back to Hasan. Kamala realizes it was her, not Aisha, who led Sana to Hasan on the night of the Partition. With her mission complete, the young hero returns to the alley in present day.

The veil between Earth-616 and the Noor dimension has opened, and ClanDestines realize they can now go home. But when Fariha attempts to pass through, she disintegrates. The veil destabilizes, shooting bursts of destructive energy that signal bad times ahead. Kamala jumps into action, using her powers to shield the innocent bystanders that Kareem is helping to flee the area.

Najma thinks she can make it through the veil, but Kamala reminds the Djinn warrior that she has Kamran. However, Najma already left him behind and only sees one way to close it. In her final act, she sacrifices herself to close the dangerous portal — uttering Kamran’s name similar to Aisha’s last call. But as she does so, some of that energy finds its way to Kamran, seemingly activating his powers. Remember when Najma told Kamala in Episode 3 that she hoped the bangle would help unlock her son’s powers? Given that his fist lights up just like Kamala’s when she wears the bangle, it looks like he no longer needs it to tap into his own magic.

Back at the alley, Muneeba and Nani walk in on Kamala using her powers as a shield, and that’s how Muneeba finds out her daughter is the “light girl” from the news reports. Kamala then hands Aisha’s photograph of her family to Nani as proof that everything her grandmother believed was real. 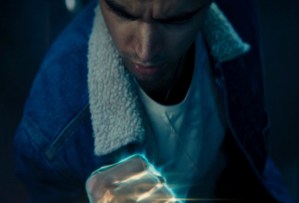 And here’s where we get the origins of Kamala’s costume: When she says goodbye to Kareem, he gives her his red scarf, which she’ll eventually wear around her neck. Plus, Muneeba finds Kamala’s necklace, which broke into the shape of the emblem that will come to define her look.

In a much-needed bonding between Kamala, her mother and her grandmother, Kamala learns that she and her mom are more alike that she realized. Muneeba was a rebellious teenager who once ran away from home to see Bon Jovi.

The mood of the episode shifts when Kamran runs up on Bruno in need of a place to crash since he has nowhere else to go. He believes his mother Najma is coming back for him, despite her dying while closing the veil. He and Bruno have virtually nothing in common, so their conversation is super awkward.

A drone appears outside of Bruno’s window, and Kamran realizes he’s been followed. Both teens narrowly escape as Bruno’s place is blown to bits.

What did you think of this week’s Ms. Marvel? What do you hope to see in the finale? Drop a comment below.