In the final moments of Wednesday’s Ms. Marvel, Kamala is accidentally transported back in time to 1947, where she witnesses firsthand the traumatic event she’d only heard about in stories up until then: the Partition of India, in which the British-ruled country was split into India and Pakistan.

Nani gives a somber firsthand account, calling it a “border marked with blood and pain,” in which “people are claiming their identity based on an idea some old Englishmen had when they were fleeing the country.” Her recollection illustrates the lasting effects of the violent split, which still resonates today. 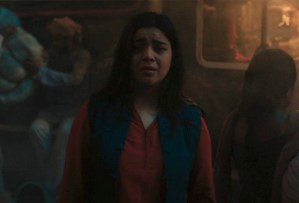 “Partition is such a monumental event in the life of anyone who has lived in the Indian subcontinent,” Sharmeen Obaid-Chinoy, who directed Episodes 4 and 5, tells TVLine. “There is so much intergenerational trauma, and it’s so rarely ever talked about and almost never visualized, [that] it was a great responsibility on my shoulders. How do you bring a superhero into that world? And how do you explain to a greater audience about what 1947 and the families being torn apart meant for people?”

To accomplish that, the filmmaker drew heavily from oral histories from that time so that what we see on screen closely resembles what occurred as many fled their homeland.

“If you notice when she lands into Partition and she walks onto the platform, she’s bearing witness to the conversations that are taking place between father and son… two friends who will never see each other again, a daughter worried the mother and she would not find space on the train,” Obaid-Chinoy explains. “In that moment, she’s just Kamala. She’s just bearing witness to a part of her history and her life that she’s only heard about and knows that her family carries as deep trauma when they left their home.”

(Creator Bisha K. Ali and writer Fatimah Asghar compiled a reading list here for those interested in learning more about the Partition.)

Kamala’s unexpected trip to the past left her initially disoriented, but the experience has the potential to unlock a newfound understanding of who she is and where she comes from.

“I think that Kamala is going to be finding her voice in Episode 5,” the director says. “She will continue her great big adventure that she’s on. Every little bit of what we filmed in Episode 4 gives us a greater understanding of who she is and why it’s important for her to find out what her source of power is.”